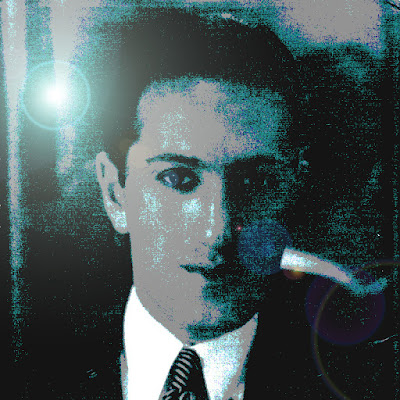 Gershwin is a time traveller - you can see him out of the corner of your eye. He did not die in the normal sense of the word, because he did not know where he was. He was in a very high fever and dying all alone in a hospital room after failed brain surgery. When he left his body, he experienced extreme disorientation and for quite a while did not realize he was dead. This meant that a light, loose Gershwin-shaped energy field still moved about the world, and lit up whenever his music was played (which was almost all the time). After a very long time, though it was a mere moment in eternity, he began to realize who and how he actually was, that he was no longer in a body and would have to exist in a very different form. Being a soul sojourner from the beginning, this was not a threat but an adventure to him. But even in spite of this necessary metamorphosis, to a remarkable degree, he retained a George Gershwin shape. No matter what sort of problems he was having in his life, and he had many that we don't know anything about, there was a ferocious static-charged supernatural pumped boost of energy that somehow kept on connecting people with each other when he was around. But ironically, in spite of his sacred mission to join people joyously,in his life he had many struggles with intimacy, which led to a loneliness even as he was the most popular man in the room. During this strange leaving-his-body-and-not-being-sure-where-he-was period, he began to have extraordinary insight into not just his own condition, but the human condition. GG's emotional affect and his emotions seemed curiously light, but there was a galaxy of melancholy within that he did not show to too many people. The stars in that galaxy exploded out of his fingers and his brain and were made manifest as notes of music on the page. Though he lived at a hurtling pace few people could equal, little did he know that he was absorbing all of humanity's travails, gaining an understanding of suffering that would not be fully realized until he found himself in a different form outside his body. It would have been unbearably painful, had his life (as he knew it) not been over, a blessed cessation of all earthly pain. When a soul or entity gains this sort of awareness, mysterious alchemy takes place because the need here on earth for that level of understanding is so dire. Those pained and anguished places in that broken thing we call the human condition began to draw and attract this generous, gentle, deeply broken spirit. There was Gershwin dust in the room sifting down like stardust, particularly when there was music playing. And there was music playing a lot. Someone, not keeping up their guard, felt something strange or warm and not quite familiar in the room, yet also hauntingly familiar. Someone else thought they saw him for a second, or someone that looked like him. There was in some subconscious way a powerful sense that a healing was beginning to happen. As the entity begins to heal, so it heals itself. George's brain gave way, the most disturbing way to die, so that he was basically humbled by losing the genius brain he was celebrated for. Stripped of that, even of that, all that was left was his essence. How can I say how this happens? How can I be sure that George Gershwin is a time traveller and an entity who is basically free to move about within time and space wherever and whenever he wishes?