I smoke because I bloody want to! 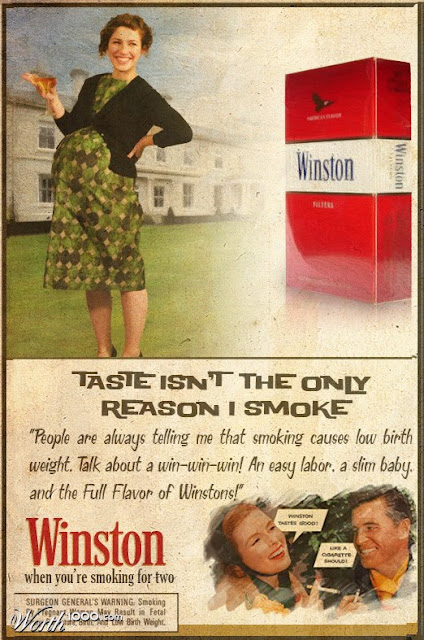 While mushing my way through a ton of bizarre vintage ads to post, this one jumped out at me, causing me utter disbelief. The text said: "Taste isn't the only reason I smoke. People are always telling me that smoking causes low birth weight. Talk about a win-win-win! An easy labor, a slim baby, and the Full Flavor of Winstons!" Below her cheery comment was the slogan, "Winston - when you're smoking for two".This ad seemed to be saying that back in the bad old days, mothers deliberately smoked to have smaller babies which would be easier to pop out. The idea was so extreme that I wondered if the ad had been tampered with, if it was satirical, or a blistering comment on something-or-other.

Some women keep smoking through pregnancy just because they want to give birth to a smaller baby, according to British researchers.

Even though most women now understand there is “overwhelming evidence” that smoking during pregnancy is harmful to the developing child, they continue to do so, said Professor Nick Macklon of Southampton University. 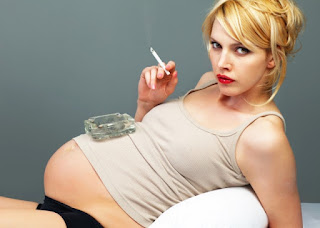 He told the annual meeting of the European Society of Human Reproduction and Embryology (ESHRE) in Stockholm: “It is important that people who believe that a smaller baby means an easier birth take into account the increased risk of complicated deliveries in smokers, as well as the risk of disease later in life which goes with low birth weight.”

"Smoking during pregnancy is not just bad for the mother and baby, but for the adult it will grow into."

He and a team at the university’s department of obstetrics and gynaecology have now produced what he called the first “hard evidence” that women who stopped smoking upon discovery they were pregnant, could protect their unborn children from harm.

The study looked at over 50,000 pregnancies in the Southampton area, analysing the birth weight of the babies and comparing this to self-reported smoking behaviour. 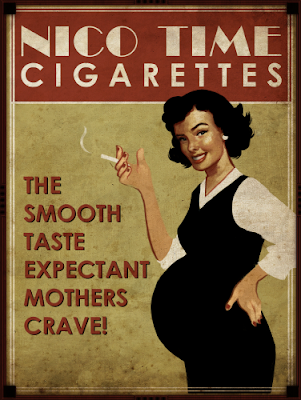 Those who continued to smoke through pregnancy had lower weight babies.

The more women smoked the lighter their babies were: those who smoked more than 10 a day had babies weighing some 11oz (300g) less than the average birth weight from a non-smoking mother, of about 7lb 10oz (3.45kg).

However, those who ceased smoking at about the time they conceived were just as likely to give birth to a normal weight baby as those who had never smoked.

He said: “We can now give couples hard evidence that making the effort to stop smoking in the periconceptional will be beneficial for their baby.

This could help change behaviour among smoking mothers, which he said had hardly changed in Britain over the last decade. 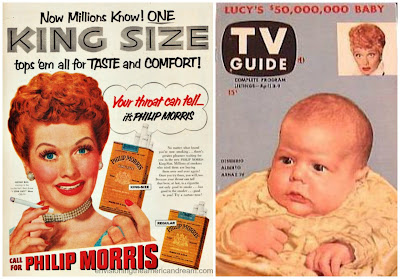 Prof Macklon explained that smoking during pregnancy “affects the transportation of nutrients, especially oxygen, across the placenta”.

It was also “reasonable to assume” that some of the 4,000 or so toxins in cigarettes were harmful to foetuses.

Note that in spite of the provocative headline, this article does not come right out and directly state that mothers smoke because they want to have smaller babies: “It is important that people who believe that a smaller baby means an easier birth take into account the increased risk of complicated deliveries in smokers." The message is in there somewhere, of course, but it's politically incorrect (or something - or violates civil rights) to spell it out.

If this is true, then the world is in more trouble than I thought. Next women will guzzle alcohol during pregnancy to deliberately cause fetal alcohol syndrome, because a dumb child is easier to handle than a smart one, won't be so expensive to educate, and won't sass you back. 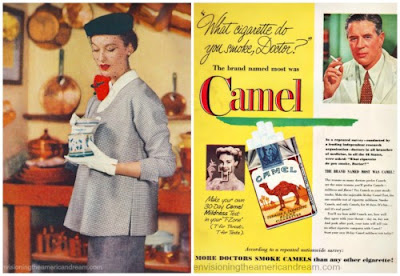 This Camels ad is particularly insidious. It shows a woman wearing a veil, white gloves and a sort of Jackie Kennedy flared jacket, delicately implying pregnancy. On the opposite page is the usual garbage about "what cigarette do you smoke, Doctor?" The juxtaposition of the ladylike woman "in the family way" with a doctor earnestly pushing his cancer sticks jams these two elements together in people's minds: Doc loves to smoke, particularly Camels, meaning it must be OK; so for the pregnant woman, facing coyly in the other direction, it must also be OK, and for her baby too. Doctors were gods then, and it didn't matter what sort of bilge they promoted or defended.

My scanner is busted, or I'd post another photo of a pregnant woman from The Family of Man, a very tony and pretentious photographic exhibit from the 1950s. I am sure there was no irony or censure in the fact that she very obviously held a cigarette, right out in front of her swollen abdomen, in a way which people probably thought was darling. She had a sort of dreamy, oh-I'm-just-waiting-for-it posture, "but while I'm waiting, I'll just have a smoke". Most of these "candid" shots seem very posed to me, so let's hope she did not subject her baby to second-hand smoke, on top of whatever horrors crossed her placenta from puffing on Camels. 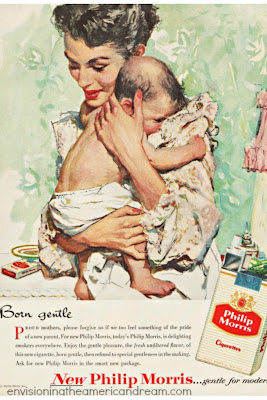 The above ad looks like it should be for Johnson and Johnson or Gerber or Pet Milk, but it's not. Disgusting of Big Tobacco to claim they take just as much pride in their lung-rotting lethal weapon as you do in your newborn infant. It's all the same to them. Birth. Death. Note also (in the text below) how in a hundred-word ad, the brand name appears FOUR times, as does the term "gentle/gentleness" - and what the FUCK does that have to do with a cigarette?

Proud mothers, please forgive us if we too feel something of the pride of a new parent. For new Philip Morris, today's Philip Morris, is delighting smokers everywhere. Enjoy the gentle pleasure, the fresh unfiltered flavor, of this new cigarette, born gentle, then refined to special gentleness in the making. Ask for new Philip Morris in the smart new package. NEW Philip Morris. . . gentle for modern tastes 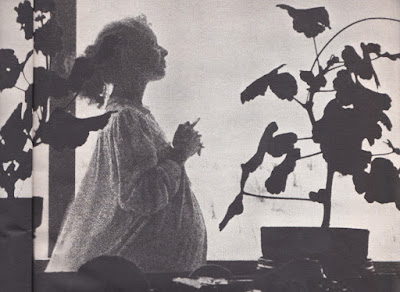 BLOGGER'S UPDATE. I got my scanner working, and though this is a bad representation of that photo from The Family of Man, you can see what I mean. The subject's expectant dreaminess is completely wrecked by that cigarette, though I doubt if it had much impact back then, except to make people think: "Lucky her. She'll have an easy labor, a "slim" (read: premature) baby, and her Winstons too. Win-win-win!"

Separated at birth: Haley Joel Osment and a bull terrier 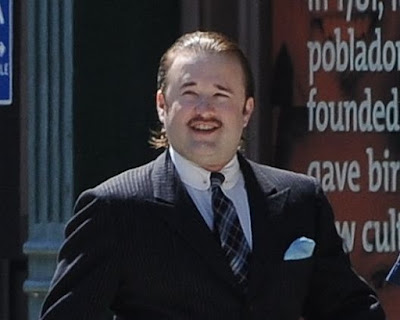 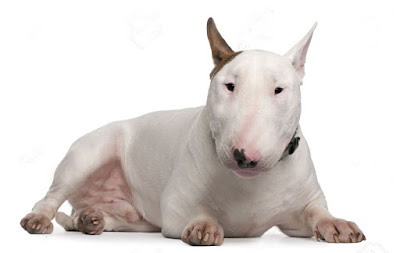 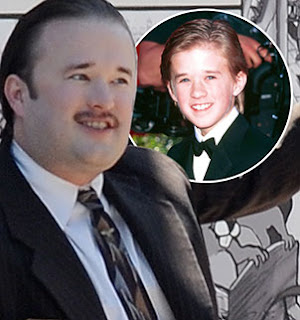 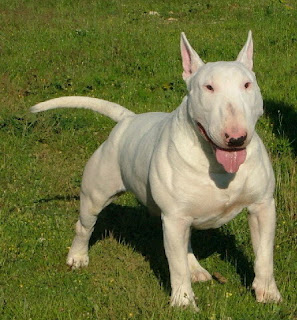 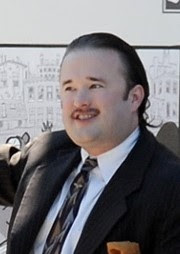 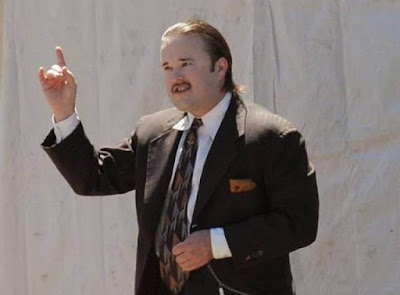 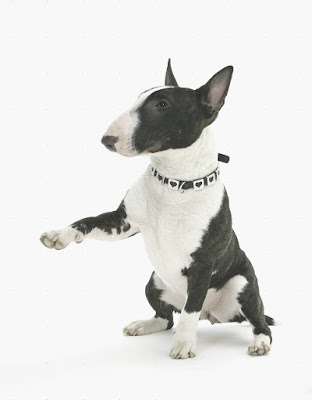