Smoke SAFELY in your car! 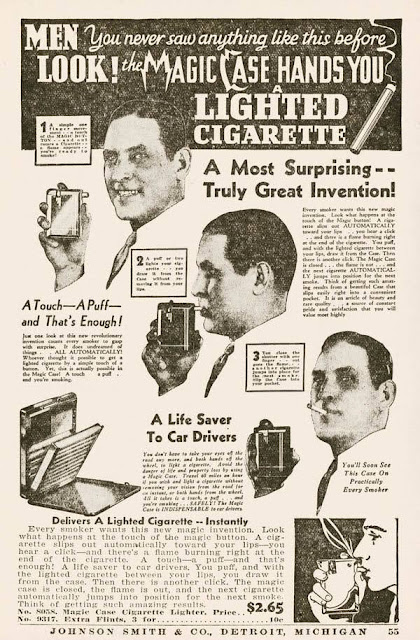 Old ads for products that now, somehow, don't seem like such a good idea are a staple of this blog. This one just jumped out at me as wrong on so many levels, I can't even count them all. Those vape things, e-cigarettes (the gadgets that are supposed to help you stop smoking) keep exploding in people's pockets, reminding me of that classic rhyme which begins, "Liar, liar. . . ". But the potential for disaster here seems infinitely magnified.

I can't begin to transcribe all the flyspeck type on this thing, but the bottom sums it up:

Delivers A Lighted Cigarette - - Instantly. Every smoker wants this new magic invention. Look what happens at the touch of the magic button. A cigarette slips out automatically toward your lips - you hear a click - and there's a flame burning right at the end  of the cigarette. A touch - a puff - and that's enough! A life saver to car drivers. You puff, and with the lighted cigarette between your lips, you draw it from the case. Then there is another click. The magic case is closed, the flame is out, and the next cigarette automatically jumps into position for the next smoke. Think of getting such amazing results. 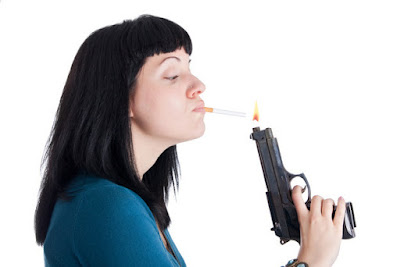 I can just make out the part about A Life Saver To Car Drivers.

You don't have to take your eyes off the road any more, and both hands off the wheel, to light a cigarette. Avoid the danger of life and property loss by using a Magic Case. Travel 60 miles an hour if you wish and light a cigarette withiout removing your vision from the road for an instant, or both hands from the wheel. All it takes is a touch, a puff. . . and you're smoking. . . SAFELY! The Magic Case is INDISPENSIBLE to car drivers.

I'm still trying to figure out the sequence of events here, involving clicks, puffs, lighted cigarettes and steering wheels, not to mention the potential danger of driving an incredible 60 miles per hour (the origin of the dusty phrase, "going like sixty").  But if you dropped this sucker while it was incendiary, might it not burn a hole in your pants, if not your scrotum? If there were some papers rustling around at your feet, or - oh, say, an oily rag or two - . But this is mere conjecture. Going on and on about "smoking safely" feels like an oxymoron in itself. Open flames, that close to your face - and just what is it that fuels these flames? At what sort of Lilliputian service station would you refill this thing?  And the flint - or whatever - the sulphur - it doesn't bear thinking about. 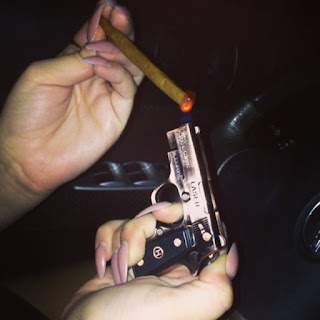 Looking on Google images, I see hundreds of cigarette cases, and to me it's like looking at Star Trek phasers or remote controls for Doomsday. It just does not apply, it has nothing to do with me. So they all look exotic and deadly. Do some of them automatically ignite your cigarette before it even touches your lips? I have no idea. It's possible, I guess. The world of smoking repulses me more than I can say. But in this ad, it's a given, just something everybody does, and having your cigarette lighted for you is seen as the ultimate in convenience.

It would have changed so much. Now, Voyager would have been ruined, because Paul Henreid wouldn't have done that business with lighting the two cigarettes and giving one to Bette Davis. Ernie Kovacs might have survived, however, if they had made a Magic Case for cigars. He was barrelling along a tortuous, unfamiliar road at midnight, in torrential rain, in a defective and unfamiliar car, when he decided that now might be a nice time to enjoy a cigar. He could light cigars with one hand, cleverly igniting the match with his thumbnail, but in this case he took his hand off the wheel at exactly the wrong time and ended up in twisted, smoking wreckage.

He never would have used one of these anyway because they are so goddamn stupid. And I can't find anything more about them anywhere, so probably they didn't even catch on.

Posted by Margaret Gunning at 11:31 AM No comments:

Everybody's talkin' 'bout the viral sensation of the week, the Brahma Chicken! Now it turns out there's more than one of them. (Actually, a whole breed.) They're fluffy, they're enormous (as much as 14 pounds, though turkeys are a hell of a lot heavier), they have legs like those Clydesdales in the Budweiser ads, but under the fluff are spurs that are something like four inches long. These two roosters had better be on speaking terms (or clucking terms, or whatever).

I'm still getting some mileage out of the last chicken:

The above video made a nice gif, in which one of the roosters does a nice turn as if to say, hey, take a look. I'M a big chicken, too.

Posted by Margaret Gunning at 11:29 AM No comments: