Have We Been Playing Gershwin Wrong for 70 Years?

(The following is a piece from the New York Times which caught my eye, then dragged me right in. It's pretty long, but I had to reproduce it here in its entirety. It illustrates a crucial point about art: remove one element, or change it, and the whole work is changed in subtle or not-so-subtle ways. This whole story reminds me of the famous gaffe by the art gallery that hung a painting upside-down and didn't notice it for 30 years.)


Have We Been Playing Gershwin Wrong for 70 Years?


It is one of the most famous pieces of American music — but for 70 years orchestras may have been playing one of its best-known effects wrong.

The work is George Gershwin’s jaunty, jazzy symphonic poem “An American in Paris,” and the effect involves a set of instruments that were decidedly not standard equipment when it was written in 1928: French taxi horns, which honk in several places as the music evokes the urban soundscape that a Yankee tourist experiences while exploring the City of Light.

The question is what notes should those taxi horns play. In something of a musicological bombshell, a coming critical edition of the works of George and Ira Gershwin being prepared at the University of Michigan will argue that the now-standard horn pitches — heard in the classic 1951 movie musical with Gene Kelly, in leading concert halls around the world, and eight times a week on Broadway in Christopher Wheeldon’s acclaimed stage adaptation — are not what Gershwin intended.

The finding promises to divide musicians, and could require instrument-makers, sellers and renters — who now offer sets of tuned taxi horns specifically for “An American in Paris” — to consider investing in new sets tuned to the new notes. The change would give a subtle, but distinctly different, cast to a classic score that was influenced by some of the leading composers of its day, and which followed in the footsteps of other works that employed so-called “found” instruments, including Satie’s 1917 ballet “Parade,” which uses a typewriter and gunshots, and Frederick Converse’s 1927 “Flivver Ten Million,” an ode to the Ford automobile, which uses car horns.

This is the version of An American in Paris which has been played in concert halls for decades. Note the sound of the taxi horns in the first minute.

“I have a feeling that percussionists are going to be somewhat put out by this whole conclusion,” said Mark Clague, the editor in chief of the critical edition, who attended some test performances of the revised score by the Reno Philharmonic last month.

The ambiguity stems from how the taxi horn parts are notated in Gershwin’s original handwritten score. To put it in Gershwin terms, we got rhythm: The score shows that the horns play sets of accented eighth notes. But when it comes to pitch, things are less clear. Gershwin’s score labels the four taxi horns with a circled “A,” a circled “B,” a circled “C” and a circled “D.” Those circled letters have been interpreted as indicating which note each horn should play — A, B, C and D on the scale — since at least 1945, when Arturo Toscanini used those pitches in recording the piece with the NBC Symphony Orchestra.

This is the original version recorded in 1929 under Gershwin's supervision. Take note of the sound of those taxi horns!

But the new critical edition will argue that Gershwin’s circled letters were merely labels specifying which horns to play, not which notes. Mr. Clague, an associate professor of musicology at the University of Michigan, mentioned that Gershwin handpicked taxi horns to buy during his 1928 trip to Paris, and that friends and colleagues recalled that he had been particular about which notes they played. Mr. Clague also pointed to the evidence of a Victor recording of “An American in Paris” that was made in 1929, under Gershwin’s supervision and presumably using his horns: The taxi horns on that recording sound a more atmospheric, more dissonant set of notes: A flat, B flat, a much higher D, and lower A.

Gershwin’s original instruments seem to have been lost. Michael Strunsky, 81, a nephew of Ira Gershwin and trustee of his estate, said in a telephone interview that his father, William English Strunsky, had played the taxi horns when George Gershwin first gave an informal recital of the piece for the family in 1928 after sailing back from Europe.

“I went looking for those taxi horns once,” Mr. Strunsky said. “And somewhere in the moves back and forth, and this and that and the other thing, they disappeared.”

Russ Knutson, the owner of Chicago Percussion Rental in Illinois, who rents out tuned horns for “An American in Paris” and has played them on occasion, said in an interview that he thought that the currently accepted A, B, C and D pitches “fit exactly in the score.”
“The whole country and the whole world have been oriented to doing it with those four pitches,” he said in a telephone interview. “All of the recordings you’ve heard are with those four pitches.”

But Trey Wyatt, a percussionist with the San Francisco Symphony who estimated that he had played the horn parts 40 or 50 times, and who rents out several sets through his company, California Percussion Rental, said that he was intrigued by the finding.


“If this new tuning takes off, I may have to buy another five sets of these horns,” he said.

Rob Fisher, the musical score adapter and supervisor of the new staging of “An American in Paris” currently on Broadway, said that he agreed that the A, B, C and D labels were names and not pitches, but that the show had ended up using the standard horns.

But he questioned whether the pitches used in the Victor recording should be taken as gospel. “I don’t ever want to say what was in somebody’s mind,” he said. “Were those the four horns that made him the happiest that day, when he was picking horns? I just feel like if he’d wanted exact pitches for his horns, he was really good about writing down intentions.”

Mr. Clague said that between the 1929 recording that Gershwin supervised and the 1945 Toscanini recording, which seemed to help establish a new performance tradition, there was great variation in how the taxi horns were played. But he said that his musical analysis gave weight to the idea that the pitches used in the 1929 Victor recording work best. “George was thinking harmonically and melodically with the taxi horns,” he said. “It’s not just a sound effect.” 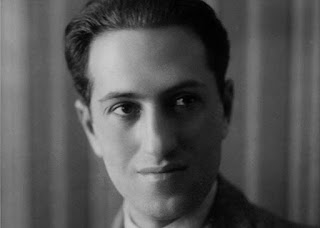 Blogger's Observations. I decided I'd do this whole thing by ear, as a sort of auditory blind taste test. I'd try to determine which version was the "true" one: the one we currently hear in concert halls and have been hearing for 70 years, or the first recording ever made in 1929, supervised by Gershwin himself.

I've been listening to An American in Paris since I was a wee tot, and I even remember my mother explaining to me that it used real taxi horns, which I thought was pretty strange. I'm not a musician, but I was saturated in music from the get-go, surrounded by real musicians, and by inheritance came in with the same equipment, meaning a pretty sharp ear. So I sat back and just plugged myself in to the sound, going back in time to that 78 r.p.m. record made in 1929.

The very first blast on the first taxi-horn made me sit bolt-upright and yell, "AAAAHHH!" It was completely different, a totally different sound! The blasts that came after that were even more of a revelation: lower, earthier, more dissonant, with the odd higher note to add harmonics (for Gershwin heard music in noise: he said so all the time). These sounds were just so much more. . . Gershwiny.

I am utterly convinced that these are the taxi horns Gershwin originally used. These are the horns he collected while in Paris, scrounging around in auto shops and junk stores, then picking four out of a couple of dozen to match his score - no, wait. It's bigger than that. THE SCORE WAS MATCHED TO THE HORNS. The two came together like a hand in glove.

You wonder how orchestras could've gotten it so wrong for so long. To write A, B, C and D and circle them is pretty obviously a way to label each horn, not describe the horn's tone. It's just self-evident, isn't it?

Now people are saying they wish Gershwin hadn't been so "ambiguous". He was a genius, people, and geniuses are ambiguous by nature, leaving the rest of us snail-brains in the dust. Now some percussionists, suffering from defensiveness and hurt pride and unable to admit they may have been wrong, are insisting WE had it right all along, and Gershwin had it wrong. Or that it didn't matter. Or that, when making the original 1929 recording, he just picked out the horns he happened to want on that particular day, pulled them out of the junk pile pretty much at random.

Gershwin was an utter perfectionist. He never took stabs at things, not even improvising. It was from God's mouth to his ear/fingers. His scores were as immaculate as Mozart's, not a note out of place. He wouldn't just rummage around in his junk drawer and pull out a few taxi horns.

The problem is, he did not happen to consider that people would not know how to reproduce those exact sounds in the years and decades to come. Perhaps he believed it was self-evident and that they couldn't possibly get it wrong. So somebody took a flying-leap guess based on some letters with circles around them on the score (and if the piece is in the key of A, it obviously would have a great big circle drawn around the A. Isn't that how you tell what key something is in?), and thus the whole thing became standardized.

I want to keep listening to that original recording, except that it makes me want to cry. Gershwin went through so much in his short, sometimes very painful life: his masterpiece Porgy and Bess was cut by about a third for its first performance (though most operas more than exceed its original length); the critics slung mud at it and called it garbage. He was a sensitive soul and he DID care what people thought, though artists aren't supposed to. And then he died at 38, and in so much agony, essentially alone.

So for God's sake, people. Get those taxi horns right! It's the least you can do for poor George.

Posted by Margaret Gunning at 2:57 PM No comments:

Posted by Margaret Gunning at 11:25 AM No comments: