Sister Wives Season Finale: or, how to kill a useless day

Forgive me, please - oh God, forgive me, for I have a nasty filthy habit and I enjoy the hell out of it. I'm powerless over it and it is just such hell, I'm about to join SWA (Sister Wives Anonymous).

I'm powerless over the Fundamentalist Mormon Brown family, who reside not in polygamist-friendly Utah but in Las Vegas. (Long story.) I'm shamefaced over the whole dang crew of them: Merry, Sheri, Dairy and Marvelle-Ann (or something).

Sister Husband Kody Brown, who has no visible means of support except a fat salary from TLC, is the four-way hub of this mad domestic mess, dashing not from bedroom to bedroom but from house to house - meaning, the four brand-new custom-built homes the Browns purchased in their very own cul-de-sac after running away from Utah for some imaginary crime.

No one has any money in this family, but, sensing the impending meltdown of the entire system, they decide to plan an elaborate Commitment Ceremony (or four-way remarriage bash) costing, probably, at least $10,000.00.

Some 200 people are coming to this affair, if I may use that expression, so the Browns must know an awful lot of other polygs, some obviously from out of state. But this whole Walmart-catered affair, this stacking-green-plastic-chairs-and-rolls-of-white-paper-on-top-of-folding-tables-borrowed-from-the-local-high-school-gym deal, seemed salted with extras, people who would sit there, eat,and look interested while the Browns nervously read out an interminable Mission Statement which ran on much longer than the Ten Commandments. (I mean the movie version.)

But let's back up a little. All we really cared about, after all, was the four wives' dresses. And it's true, I really did have an interest in watching the process of these gowns being individually designed and created for them. 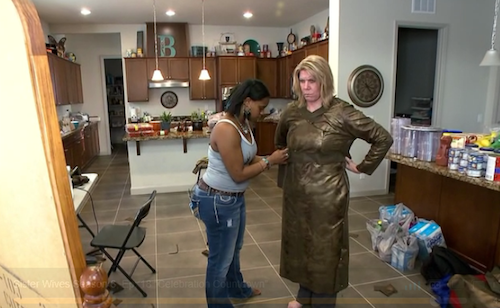 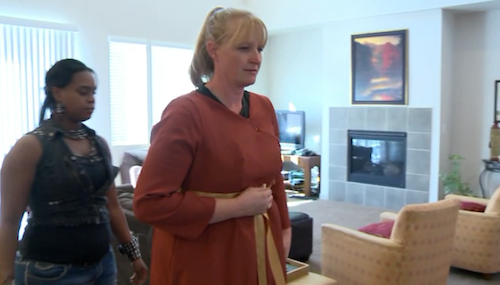 For some reason, they picked about the worst person they could find, a young woman freshly graduated from"design school" who had obviously never made a dress in her life. Then they gave her three weeks to design and make four original, formal-quality gowns in three radically different sizes and styles. There were interminable shots of this young woman pinning, and pinning, and pinning the lopsided, saggy, inside-out, fraying, mismatched pieces of fabric on the wives. None of it looked good, and the general atmosphere was one of sweating alarm as the completely-inexperienced designer tugged and swore. Bringing her mother in at the last minute to keep the ship from sinking altogether did not help.

The whole dress story sort of collapsed, and I was actually shocked that it turned out so badly. Two of the four dresses had to be scrapped entirely ("This isn't working. Do you have something in your closet?"). The other two were unfortunate, like bad costumes from a high school musical, but were launched anyway so the enterprise wouldn't be a total flop. 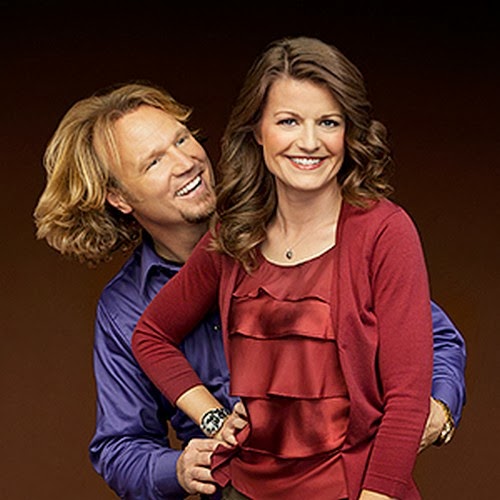 Robyn, the skinniest and most Kody-worthy of the four (see photo above: now why didn't she wear THAT little red number to the ceremony, seeing as how it made Kody's eyes pop out?) picked a nice little funeral dress out of her closet, and Meri, who doesn't have the sense of a goat, went out on a mad spree and found something for $59.00 that LOOKED like it cost $ 59.00, so tight on her that her substantial abdomen and even her belly button pushed through the sheer fabric.

Well, at least the apple green color was good.

Christine, sometimes known as The One I Like, showed up in a sort of burnt-orange medieval maternity bathrobe, with huge pleated billows of fabric blowing back behind her. The tacky gold ribbons here and there did not contribute to the look. My only question is: where do you buy orange crimplene nowadays? Must be vintage, from Craigslist or some-such. Janelle, who currently seems to have the most fans on the show (it varies from season to season, if not week to week) would have looked nice if the amateur seamstress had  known how to sew. There were four or five bustlines at the front of this thing, meandering switchbacks of poorly-sewn, puckered seams that finally bunched up somewhere above her bust, making her look older and actually disguising her recent, impressive weight loss. 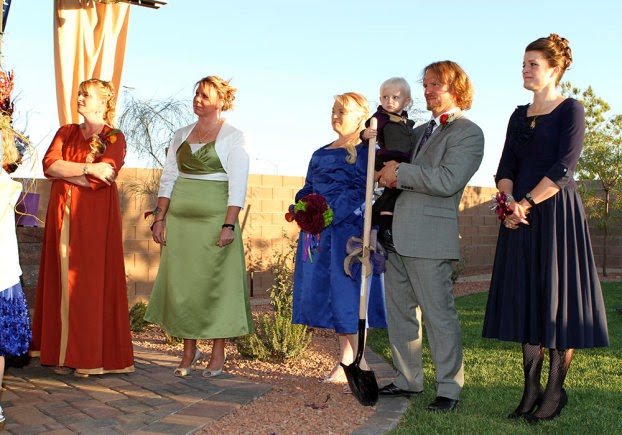 The Browns really try - they try and try - but they just never get it right. I don't know what it is. Idiocy? Or is it the pressure of living in a fishbowl, of having cameras zoom in on life's every little crisis? No one even thinks of this. To most people, "having my own reality TV show" is the pinnacle of success and happiness. Everything will be wonderful from now on.

But we are beginning to see what happens when the seeds of narcissism, which I believe are present in every one of us, are watered weekly by reality TV's relentless drool. Les Fleurs de Mal begin to sprout, and eventually they take over. 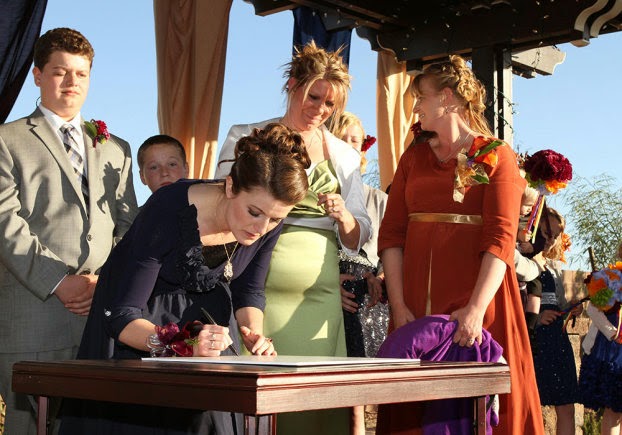 But soft! What's this I see on the horizon? For reasons that no one is willing to explain, TLC is launchng an ALL NEW polygamy show called My Five Wives, trumping Kody's harem by a whole wife.

There have been whispers on Sister Wives lately about Kody "branching out", something he naturally feels entitled to, with or without his wives' approval. The rumor was seeded and watered when a "fortune teller" came on the show (like a Fundamendalist Mormon would go for that!) and predicted Kody would take a new wife, while everyone acted stunned. Now we see why. The pressure is on: competitive wife-collecting! We can't have FIVE wives on one show, and only FOUR wives on the other, can we?

(These gals are so committed that they actually rehearse between events: note that one of them is away, presumably getting it on with Kody "Big Polyg" Brown.)

Is TLC phasing out the Browns at last? Am I right in suspecting this new show will be edgier and sexier, with younger, svelter wives and a husband who is not a complete boob?

More will be revealed.

Dear sir or madam, will you read my book
It took me years to write, will you take a look

Posted by Margaret Gunning at 2:14 PM No comments: