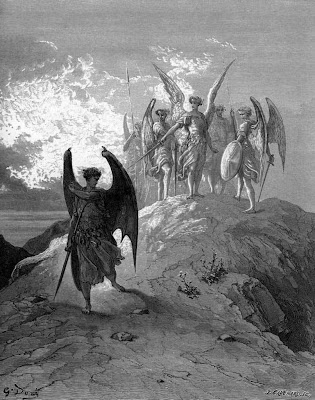 (Taken from an actual review on Amazon.com.) 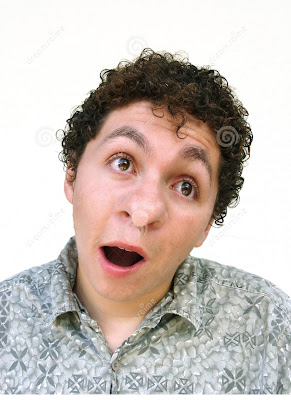 Posted by Margaret Gunning at 11:37 PM No comments:

Planes, trains and rollercoasters: how Harold gets around

Posted by Margaret Gunning at 4:14 PM No comments:

Sonnet on Stewed Prunes (by the Norsk Nightingale)

Yim Dumps ban boosting it, so it skol sell.

Only it ant cost hardly any money, -

Posted by Margaret Gunning at 2:18 PM No comments:

There's some kind-of-a movie coming out about snails. Damned if I know anything about it, but I know my granddaughters, sweet little blue-eyed blondies with bouncy hair, LOVE snails and will probably go see it.

They love slithery, antennae-y, slime-trail-leaving snails, which they keep outside in the backyard in a sort of plastic box which serves as a snail ranch. Every so often Daddy shakes it out over the garden, and the snail-collecting starts all over again. 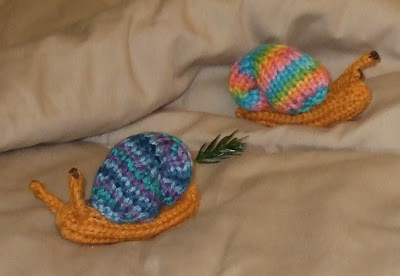 Snails this size are surprisingly easy to knit, though I had to refresh myself on the Magic Loop method which essentially knits a tube that doesn't require seaming. I could never knit on four needles to save my life.

The hardest part, of course, were the antennae, which had to be knitted as i-cords. It was only recently that I discovered this stands for "idiot cord". It's a way of getting around the four needles, I guess. There is snobbery and elitism in knitting as in everything else, and the four-needle, double-pointed crowd often looks down on those poor sods who only use two. Never mind, I just wanted to get the job done. 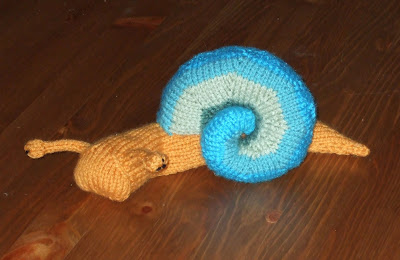 This is the original mega-snail I knitted for Erica, who must be 9 or 10 inches long. The pattern is out of a book of knitted amigurumi, but this one is atypical. Amigurumi are usually tiny, crocheted, and represent imaginary creatures. This one was honkin' huge and nearly impossible to knit. Surprisingly, the shell was relatively easy because it involved relentless decreases that pulled the tube into a curled ram's-horn shape.

The body, however. . . the instructions were woefully inadequate, only two pages, with NO illustrations. The patterns I frequently order on the net often run to twenty pages, with instructional photos on every page. So it's a wonder I completed this project at all. Having done the shell, however, I knew I couldn't stop, so I made up my own body which was more of a beanbag, stuffing it with plastic shot to give it stability. The plastic shot slowly leaked out of tiny holes in the body, however, necessitating a major repair job. 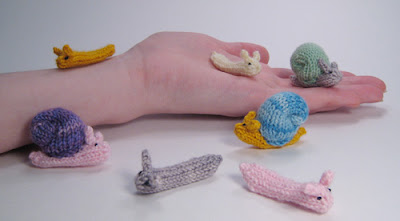 This is a link to the pattern on a charming site called Mochimochi Land. I approve, except I altered the pattern a bit (as I usually do), making the end of the snail shell a bit narrower (they're hard to curl under) and correcting a problem with the eyes.

Snails' eyes aren't placed the way they are here. They're on the ends of their icky, probing, viscous antennae.
The way the antennae look here, they're more like bunny ears. I made mine longer, with a bit of a blob on the ends so I could embroider on eyes.

The kids would never forgive me if these things were inaccurate. 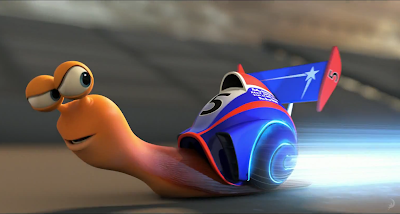 (This doesn't look much like a real snail either. The movie I was talking about is called Turbo and it's about some sort of snail race. Actually, for their size, snails aren't slow. We've had the experience of looking at a snail in the back yard, going away for a few minutes, and coming back only to find it several feet away. All that determined slime-gliding must pay off.)

Posted by Margaret Gunning at 12:16 PM No comments:

No, it's not the cute little green Geico Gecko with his Australian accent and ironic humour. It isn't the Aflac Duck, who seems to have broken a wing lately or something (but he only had one line anyway).

This is some sort of nightmarish mechanical squirrel that hands out pills.

Pink pills, Pepto-Dismal pills (as we used to call it). If they taste as sickish and paintlike as the original sickish pink liquid, then they'll make you throw up, which is one way I guess of relieving your stomach problems.

I heard once that during the war (and to my generation, The War meant only one thing) people used Pepto-Bismal as paint in a pinch, when nothing else was available. This tells me several things. One, that there must have been buckets of it lying around (why would it cost less than paint, or be more available?) Two, that there must have been a lot of sickish pink walls during the war. Three, that I think I'm going to be sick now.

And hey, waitaminute: the Pepto part I get, but Bismol? Does this stuff have bismuth in it? What the hell IS bismuth - isn't it radiactive, like Strontium 90? What's Strontium 90? Is that why it's pink?

(below. . . I hate to do this. . . I found out some facts about the bismuth, but could only post these few because I can't think about this any more.  I'm surprised this stuff hasn't been hauled off the market by the FDA.) 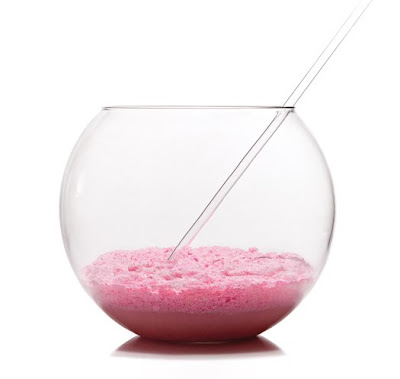 
Most modern medicines are carefully synthesized organic molecules so potent that each pill contains only a few milligrams of the active ingredient. Pepto-Bismol is a fascinating exception, both because its active ingredient is bismuth, a heavy metal commonly used in shotgun pellets, and because there is a lot of it in each dose. So much, in fact, that I was able to extract a slug of bismuth metal from a pile of pink pills. 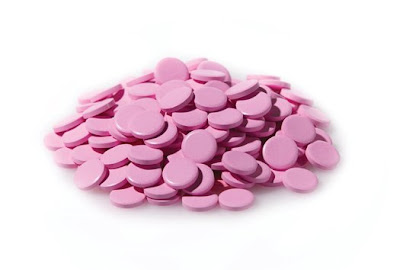 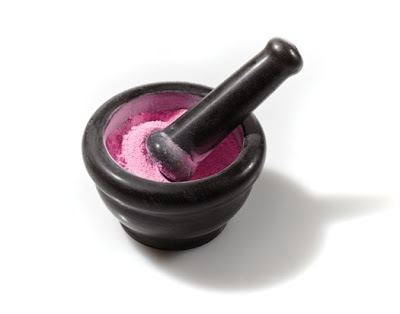 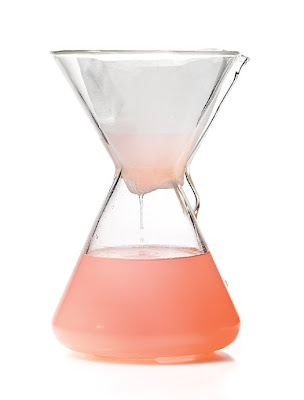 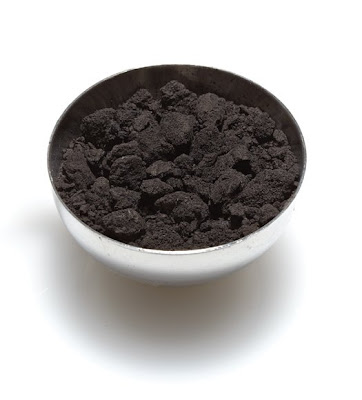 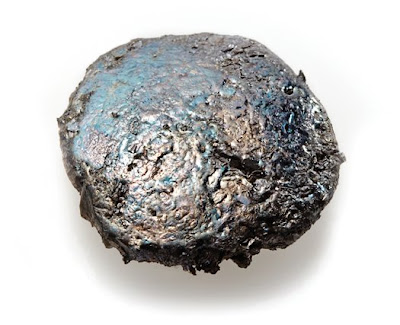