The shocking revelation that made me spit out my tea 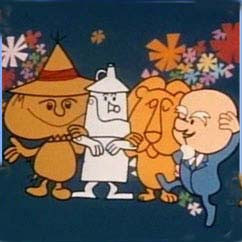 Were we-all talking about the Wizard of Oz? Am I obsessed with this topic right now? A few posts ago I shared something from my childhood: a YouTube video of a low-budget, extremely weird cartoon from a series called Tales of the Wizard of Oz. I noticed a few people had posted comments along the lines of "I remember watching these in Ontario in 1961!" and "why do all the characters have Canadian accents?"


They do, but you have to listen carefully for a "hoose" or "aboot" (or "hewwwse," which is REALLY southern Ontarion, in fact right out of Scotland). I can even hear them trying to replicate the Bostonian/Bronxian accents of the actors from the 1939 movie: "If I only had a haaaaaahhhht"; "Puddem uhhhhhp."  But the "hewwwse" still pops through.

I had some idea that these were produced by a Canadian impresario named Budge Crawley, but the more digging I did, the stranger it got. Familiar names like Bernard Cowan kept cropping up (he was a jack-of-all trades announcer: "This is Bernard Cowan speaking", a hangover from radio when nobody knew who the fuck was talking).


But this! This was pay dirt, gold in my hand. Whenever I find an old scanned newspaper clipping, I have to try to blow it up (figuratively speaking). I was able to section up this yellowed old thing from the Montreal Gazette, circa 1961, so that it's almost legible. 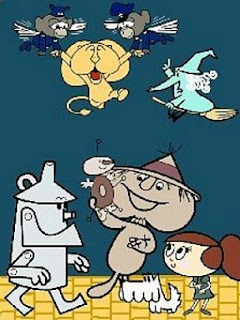 I don't know about you, but the smudgy black and white photos that ran along with this piece remind me of that surreal silent movie Metropolis with all the identical workers trudging along in lockstep. Positively Orwellian. At best the Crawley animation factory must have been a sweatshop with slave wages, and not even Disney looking down his cheap-ass nose at you and getting his cigarette-ash all over your Day-Glo-colored cell of the witch's groovy castle.

The piece itself ain't much: it's mostly a nuts-and-bolts account of a "new" style of animation (read: cheaper than Disney's). But right in the middle of the dull grey prose came a surprise that nearly blew me out of my chair. Oh OK, it didn't do that, but I nevertheless did  a spit-take with my Red Rose tea. 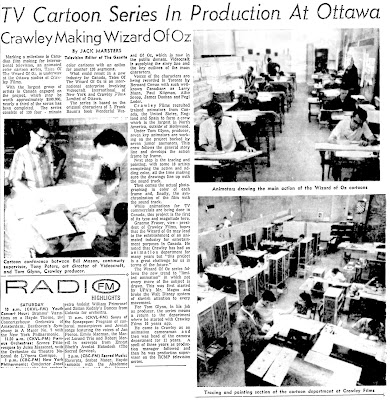 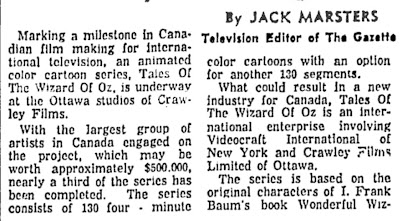 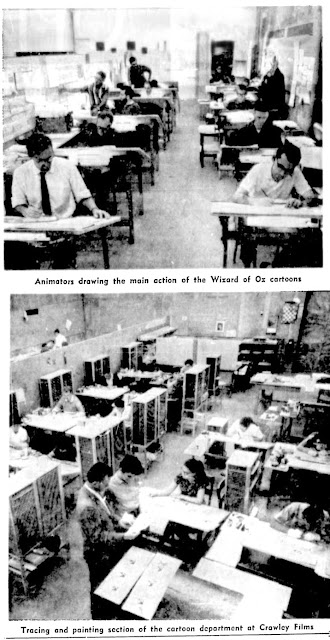 Not too exciting, is it? But look at the names of the voice actors! Along with such then-notables as Alfie Scopp, Paul Kligman and Pegi Loder, we see none other than. . . 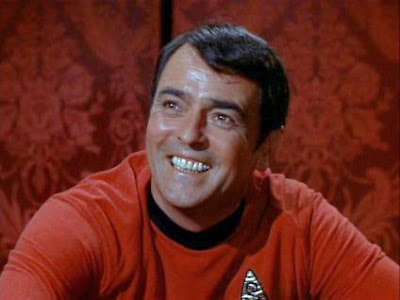 Scotty before he was Scotty! No wonder those characters said "hewwwse". I have no idea which voice impressions were James Doohan's: not the witch, surely. Not Rusty the Tin Man, nor the Wizard, who sounded like W. C. Fields. He must have voiced the gabbledy-gabbledy sound of the munchkins, or done guest spots as the dragon or Rubber Man.

The secrets of Oz never end. 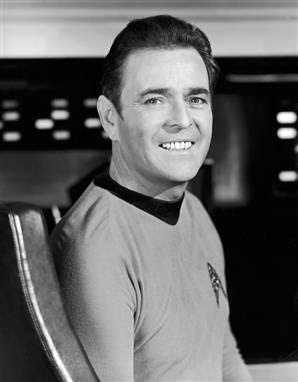