My romance with Harold Lloyd

Author's note. I have written a novel about Harold Lloyd. I know you're not supposed to say this, but I think it's the best thing I've ever done and am likely to do, and I feel it deserves serious notice from an agent and/or a publisher. I believe this story has potential, not just as a novel but a  major motion picture. Does the name Jake Gyllenhaal mean anything to you?

I would like to introduce you to my third novel, The Glass Character, a story of obsessive love and ruthless ambition set in the heady days of the Jazz Age in the 1920s. This was a time when people went to the movies almost every day, living vicariously through their heroes: Valentino, Garbo, Fairbanks and Pickford. But comedians were the biggest draw, and broad slapstick the order of the day - with one very significant exception.


Standing beside Keaton and Chaplin in popularity and prowess was a slight, diffident man named Harold Lloyd. He hid his leading man good looks under white makeup and his trademark black-framed spectacles. Nearly 100 years later, an iconic image of Lloyd remains in the popular imagination: a tiny figure holding on for dear life to the hands of a huge clock while the Model Ts chuff away 20 stories below.


With his unique combination of brilliant comedy and shy good looks, Lloyd had as many female followers as Gilbert or Barrymore. Sixteen-year-old Muriel Ashford, desperate to escape a suffocating life under her cruel father's thumb, one day hops a bus into the unknown, the of her dreams. Though the underside of her idealistic vision is nasty and fiercely competitive, she quickly lands extra work because of her Pickford-esque ability to smile and cry at the same time. 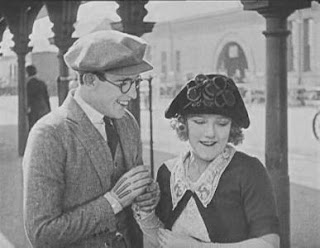 When her idol Harold Lloyd walks on the set, her life falls into a dizzy whirl of confusion, attraction, and furious pursuit.Muriel tries on and sheds one identity after another: bit actress, waitress in a speakeasy, "girl reporter", script writer - while Lloyd almost literally dances in and out of her desperately lonely world, alternately seducing her and pushing her away.

While researching this book, I repeatedly watched every Lloyd movie I could get my hands on. I was astonished at his subtlety, acting prowess and adeptness at the art of the graceful pratfall. His movies are gaining new popularity on DVD (surprisingly, with women sighing over him on message boards everywhere!). The stories wear well and retain their freshness because of the Glass Character's earnest good nature and valiant, sometimes desperate attempts to surmount impossible challenges.

Posted by Margaret Gunning at 12:27 PM