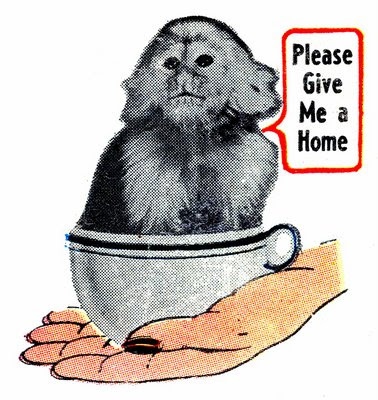 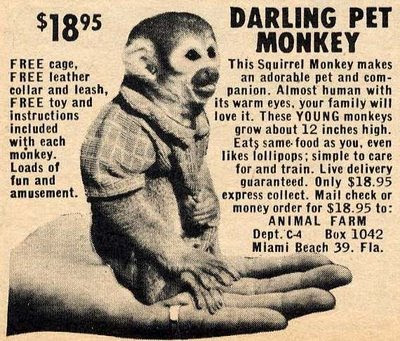 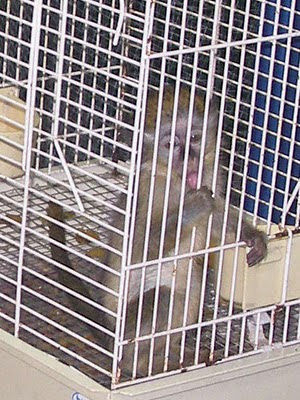 This story has been repeated so many times on so many sites, I think it's in the public domain by now. It fascinates me because I always wondered if anyone actually got one of those monkeys you could supposedly "win" from comic book ads (after selling hundreds of dollars' worth of merchandise). The chihuahua in the teacup was dicey enough, but this monkey - ummm, primates aren't known to be particularly friendly (look at humans) unless bribed, and these little buggers didn't come pre-trained. The following account is a little hair-raising. I wish there were more of a denouement, i.e., what happened to the monkey, not to mention that poor guy, after the 28 stitches?

A firsthand account follows from a guy who ordered one of those monkeys from an ad in the back of a comic book. To keep his parents from finding out, he had it shipped to a friend's house...

It came in this little cardboard box. I mean, I’m saying small. It was probably the size of a shoebox, except it was higher. It had a little chicken wire screen window in it. There was a cut out. All you could see if you looked in there was his face. I brought it home, and I actually snuck it into the basement of the house.

No instructions [were included]. He had this waist belt on, a collar, if you will, on his waist, with an unattached leash inside the box. So I opened the box up inside the cage, the monkey jumped out, I withdrew the box and found the leash. I have no idea where it came from; I assumed it came from Florida. I figured, well, it’s probably near dehydration, so I opened up the cage to put some water in it. It leapt out of the cage when I opened it up the second time! I mean, it was eyeing the pipes that I was unaware of. As soon as I opened the cage, it leapt up and grabbed onto the plumbing up on the ceiling and started using them like monkey bars, and he was just shooting along in the basement, chirping pretty loud. It was heading towards the finished side of the basement, where there was a drop ceiling, and if it got into those channels, I never would have got it. It would have been days to get this thing out of there.

I grabbed it by its tail, and it came down on, starting literally up by my shoulder, like a drill press it landed on my arm, and every bite was breaking flesh. It was literally like an unsewing machine. It was literally unsewing my arm coming down, and I was pouring blood. I grabbed it by its neck with both my wrists, threw it back in the cage. It’s screaming like a scalded cat. I’m pouring blood. My friend’s laughing uncontrollably, and my father finally comes in the basement door and goes, ‘Jeffery! What are you doing to that rabbit?’ And I go, ‘It’s not a rabbit, it’s a monkey, and it just bit the hell out of me.’ ‘A monkey? Bring it up here!’ I’m pouring, I wrapped a t-shirt around my arm to stave off the bleeding, carried the cage upstairs, and I don’t know why I bothered sneaking it in, because they fell in love with it, and it was like, there was no problem at all. They took me to the emergency room and I got 28 stitches on my arm.
Posted by Margaret Gunning at 6:41 PM No comments: 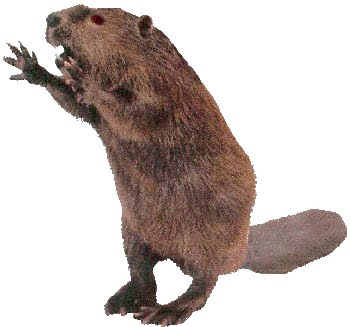 A large, agitated beaver attracted a crowd in Fort Smith, N.W.T., this week when it meandered through town and got hissy with a German shepherd.

The beaver was spotted Monday evening wandering around a residential neighbourhood, along a busy street, through a graveyard and golf course, all the while escorted by an N.W.T. Environment and Natural Resources officer.

Mike Keizer, a longtime resident in the town of 2,400 near the N.W.T.-Alberta border, said he hopped on his bicycle as soon as he heard there was a beaver on the loose.

"It looked huge. I always thought beavers would be smaller," Keizer told CBC News on Thursday.

"All the beavers I've ever seen have been in water, so you only ever see pieces of them; like, you don't get to see the whole beaver."

Another Fort Smith resident, Jason Mercredi, shot video footage of the beaver moving in a ditch and on a sidewalk along McDougal Street.

"There's a beaver holding up [the] main street," Mercredi says in the video, before asking his uncle if the animal would attack.

Got agitated, flustered
The wayward animal, which Keizer estimated was the size of a dog, zigzagged across people's lawns and around their homes.

"Every time it got agitated or flustered, it would bang its tail on the ground. I mean, I was amazed at how fast it moved when it was agitated," he recalled.

"It never backed down once. It grabbed the fence, it was hissing, and the dog was barking," Keizer said.

"When the ENR officer went to get it turned [around] so he'd get it away from town, he had a plywood sheet in front of him, and it rushed the sheet."

Keizer said he rode his bike ahead of the beaver, knocking on residents' doors and warning them to bring their dogs indoors "because there's a wild beaver walking through town, heading your way."

"While I was there, all kinds of people were driving up in their trucks and their cars and taking pictures," he said.

The beaver wandered about another kilometre or two before it headed towards the Slave River rapids and disappeared.

Keizer said in his 17 years living in Fort Smith, he has never seen a beaver — never mind a beaver so large — come into town.

Posted by Margaret Gunning at 10:15 AM No comments: