Buried, but not quite alive 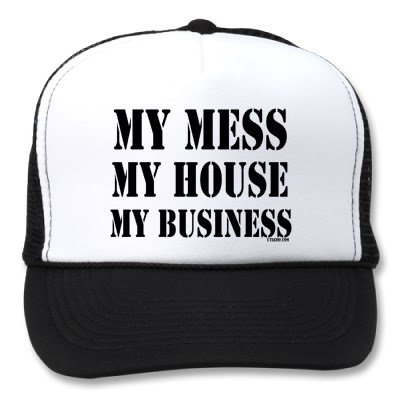 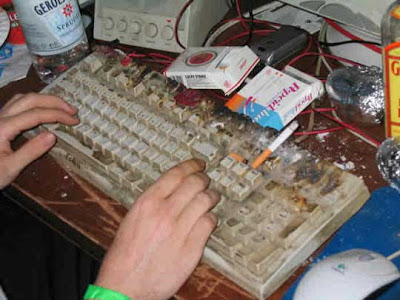 I don't know why this is, but I've always been attracted to extremes.

I get my fill of it these days, with all these so-called reality shows (all carefully stage-managed by the producers, who don't even bother to stay out of the frame any more), in which a family is torn apart by some sort of unspeakable problem (heroin addiction, crippling compulsions, etc., etc.). Surely the most bizarre of all these human sideshows is the hoarding phenomenon.
I must have really been deluded or something, but I thought hoarding just meant you were a little bit greedy. People hoarded food during World War II, didn't they, and who could blame them? The tins were all neatly stacked in the basement, or somewhere else out of sight. It wasn't nice, you weren't supposed to do it, but there was nothing too horrific about it.
Or some old lady might like to collect Hummel figurines and got carried away, so that there's not much space for her to sit down any more. That's hoarding. Isn't it?

Hamsters are called hoarders, because they like to shove copious quantities of sunflower seeds in their cheeks. Sunflower seeds seem harmless to me.

Little did I know that the hoarding of reality TV means living in what amounts to a waist-deep landfill. Pizza boxes, food wrappers, empty jars and beer cans and anything else no longer wanted is just tossed on the floor. The smell is appalling, and mice and bugs abound. It is as if these people have just given up on themselves, and on life.

As I become steadily more addicted to this awful stuff, I am beginning to notice certain themes cropping up again and again:

The family telling the psychologist/organizer that their "collecting" (not hoarding) is their own business, and not hurting them or anyone else.

Inappropriate affect: constantly smirking, chuckling or joking about the disaster while the rest of the family quietly weeps; lashing out in astonishing, malignant hate and rage at the most well-meaning attempts to help.

No functioning bathroom. No explanation given as to how these people bathe or go to the bathroom (if indeed they do).
No functioning kitchen.

No useable beds. (One particularly pathetic man huddled on the floor against a wall.)
Almost no place to sit down, and certainly no place to sit together. One partner sits on a box to eat dinner, while the other sits on the only exposed portion of the bed.

"Meals" defrosted in the microwave. Many of these people are very obese, so a lot of furtive overeating must go on behind the scenes.

No place to wash clothes. No place to store clothes, except heaped on the floor.
Okay, so among the problems these families insist they don't have are: disturbed family relations; alienation; a seemingly deliberate, literal pushing apart of loved ones by the sheer bulk of all the crap. Normal bathroom functions, normal hygiene, normal eating and sleeping, all are eroded away to nothing. The outside world is effectively shut out, and the inhabitants are shut in. They have deliberately sealed themselves inside a stinking tomb, and when approached to tidy it up a little, they say they are too overwhelmed to do it and begin to sob about their disturbed childhood.

Yes, I have no doubt that these people had enormously disturbed childhoods, but what about their disturbed adulthoods? Isn't there something they can do about this? For (as they say in recovery circles), if nothing changes, nothing changes.

A few of these profoundly disabled souls seem to have a limited life on the outside. One woman spent three hours doing her hair every morning. (It looked like one of Lady Bird Johnson's more alarming wigs.) The surface of normalcy is eggshell. Once cracked by the intrusion of "help", all sorts of twisted dysfunction bursts through.

Last night was a doozie. There are usually two stories. Though they lived in an urban setting, the first family seemed like something out of the primitive backwoods, isolated in the extreme. The father was a nasty, belligerant old man who insisted nothing was wrong and that the family had a right to live the way they wanted. The mother, her weight in excess of 300 pounds, refused to let go of even a single item, no matter how mildewed, dirty and useless. And the children! One can hardly call them children: they were 38 and 39 years old, and had never left home. The girl, for that's what she was mentally, refused to surrender a rotting old teddy bear because her Daddy had given it to her 30 years ago.
Then there was the other story, about a bizarre child-man who had concocted a story (which everyone believed without question) that he had been knighted by Prince Charles. He claimed to be an orphan from Ireland who had "come over with Father Flanagan" (! Is he trapped in an old Pat O'Brien movie, or what?) This man really was a collector of sorts, but his place was jammed with stuff so weird it looked like the inside of a schizophrenic's mind. There was no room left for anyone to live.
One can guess what really happened. His family probably couldn't cope with the stress of a toddler living in a man's body. He seemed to have the emotional equipment of a three-year-old, dressing up in costumes, playing pretend, and skipping around in his own little universe of kitsch. He had convinced himself all this stuff was worth a fortune (God knows what he had paid for it at all those garage sales!), and was only selling it off because he was dead broke.
(That's another theme. Where do these people get their money? How do they support themselves? Many of them, especially the women, are constantly buying things, like the same top in seven different colors, all left in the bags with the tags on. Or even more useless tacky items, adding to the chaos and collecting thick webs of dust that drape in the corners like macabre Halloween decorations.)
Anyway, this Sir Patrick guy was one of a kind. His Irish accent, not much better than a Lucky Charms commercial, came and went. If this was mental illness, it seemed to fit no known category.
The lowest point for me was when he found an old doll and began to cry. The therapist asked in her usual gooey compassionate way, "Does this bring something up for you?" "Me neighbor's little girl. She doyed. Ah, I loved her so." It was a new low in creepiness: maybe just as well for the little girl. (But for some reason, I was convinced that most of what he said was bullshit.)
Strange people like this used to be institutionalized, or at least hidden upstairs and forgotten. Now they are being flushed out (pardon the expression), and, to some extent, used for sensationalist entertainment. In some cases, they do seem to want help, but it seems to me they are usually being coerced, either by the family or the law. All of these places are extreme fire hazards, and many aren't even intact. If you only have half a roof on your house, sooner or later the whole place is going to cave in.

But it's not enough to need help: you have to want it, and that pathetically backward family ended up being forcibly evicted when their falling-down house was finally condemned. The last shot showed them sitting in a row staring into the camera like something out of Deliverance, with the final caption telling us they were living in an apartment with four of their seven cats and planning on repairing the house and moving back in.
Posted by Margaret Gunning at 12:42 PM 3 comments: