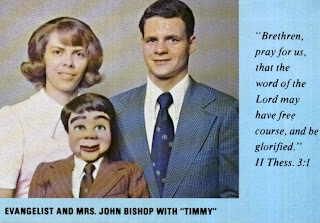 Since those strange and tawdry days of Charlie McCarthy and (shudder) Jerry Mahoney, ventriloquism seems to have gone underground. It still shows up  on novelty shows like America's Got Talent (or Britain, or Ukraine, or Mongolia or wherever), an update of the old vaudeville show glorified in the '60s by Ed Sullivan.

Though the ultimate ventriloquist was Senor Wencez with his "hand puppet" (literally, a puppet made out of his hand, which is a device that still delights toddlers), I found a particularly juicy sub-genre of the art in Christian ventriloquism. Perhaps dogma sounds better coming out of the mechanical mouth of a wood-carven mutant. 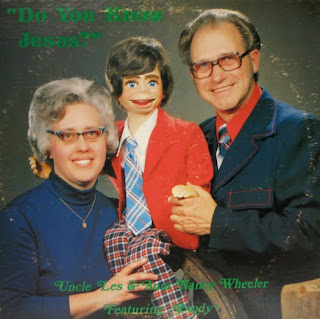 Most of these poses are from record albums that enjoyed huge popularity (I nearly said "pup-ularity") in the 1950s and '60s. No doubt these were small labels, for how else would "Do You Know Jesus?" starring Uncle Les and Aunt Nancy Wheeler (Featuring Randy) find an audience?  Quite a few of these acts proclaim family relationships, mostly uncles and aunts who somehow produced a ball-jointed wooden robot with their contribution of DNA. And I have never been able to figure out how it is that a ventriloquist's dummy would work on a record album. It wouldn't matter if you moved your lips, for sure. 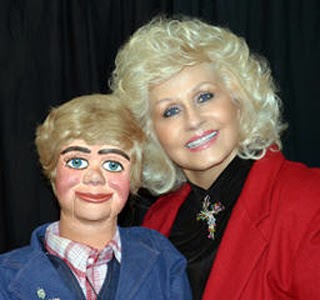 I can't help but notice that all these dummies look suspiciously alike. Creepy, I mean. That mausoleum look on the puppeteer's face is mighty strange, as if she's taking a day off from Madame Tussaud's. Both dummy and "manipulator" (the technically-correct term) seem to have the same hairdresser. (By the way, like harness-makers in the early 20th century, did the dummy-maker go into decline when audiences became more sophisticated? Or did they all flee to Bible camp?) 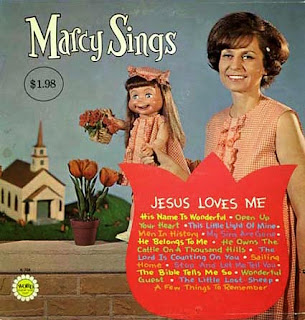 Then we have squicky little Marcy, who has so many albums that I had to pare it down to a couple. I can imagine she had a squeaky irritating voice as she prattled on about Jesus and salvation. The manipulator has perfect helmet-like Mary Tyler Moore hair, placing this somewhere in the early 1960s. I wonder if these records were discounted at Bible camp. I know they still show up in garage sales and thrift shops, eagerly snarfed up by collectors, else why would we be enjoying this display right now? 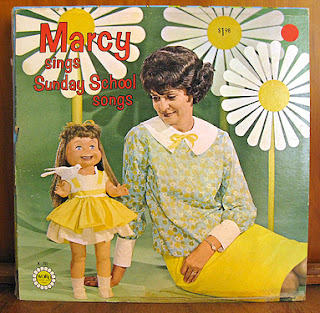 Marcy sings some more. Yikes. We see her standing up here, which is odd for a dummy, but I'm not sure the puppeteer has so much skill as to make her mouth move without any physical contact. That WOULD be squicky, if not downright supernatural. 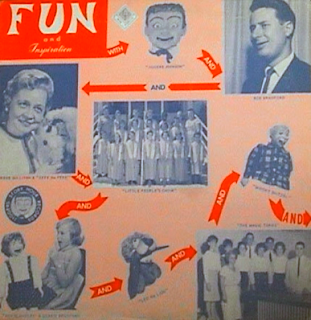 Obviously a bargain basement record, with an incomprehensible cover. Why is it that all these things exude so much guilt? I guess because that's what religion is all about. There are many red arrows that say "AND" on them, and many grainy b + w photos of dummies, plus choirs. And, as it says in the upper left corner, it is all FUN. 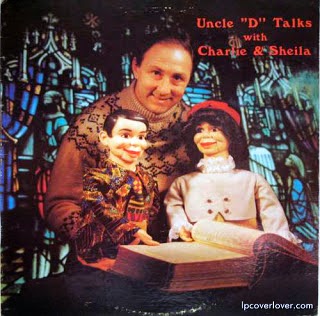 Maybe the ick factor never even occurred to anyone back then, but the thought of Uncle "D" with a girl on one knee and a boy on the other, a huge Bible in front of them and stained glass in the background is alarming today. The "D" seems to indicate a suspicious anonymity, like something from an AA meeting where people are afraid to give their last name. 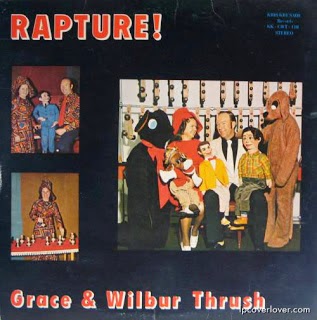 Oh, rapture! Grace and Wilbur Thrush have a whole family of gaudy dum-dums, not to mention furries such as you'd see in one of those bizarre conventions (and you can't tell ME that funny business doesn't go on in those). What's that on the left, a chess game? I'll have to blow this one up and try to get the details. 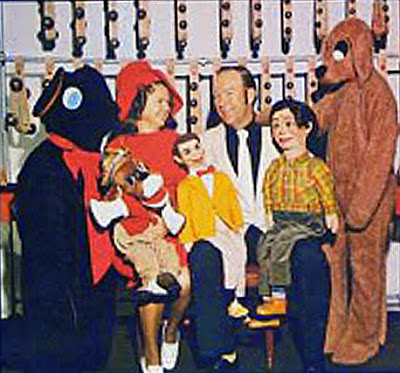 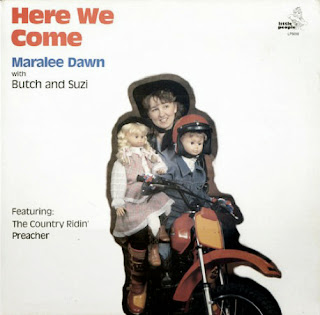 This is a very odd kind of biker ventriloquist act, with Butch and Suzi (both girls, I assume) sitting on Maralee Dawn's lap. This is an obvious pseudonym to hide her Angel Mama past. They all sit precariously atop a cardboard-cutout Harley, with the caption Featuring The Country Ridin' Preacher, which I won't even try to explain. 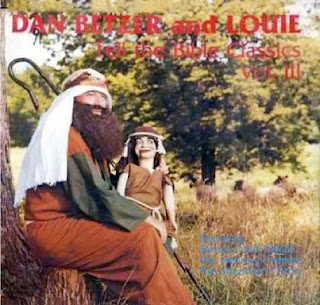 It's Sunday School pageant time, with a man dressed in his wife's bathrobe and a kitchen towel. His little disciple is no doubt meant to represent a shepherd boy of some sort. The title is hard to read, but it goes (as they say) something like this: Dan Butler and Louie tell the Bible Classics, Volume III.
No shit, VOLUME III! Volumes I and II must've been hot sellers at Bible camp, or maybe they gave them away free. I must try to track some of these down on YouTube. I need some religion about now to salvage this bizarre day before it sinks in a quagmire of wretched depravity. 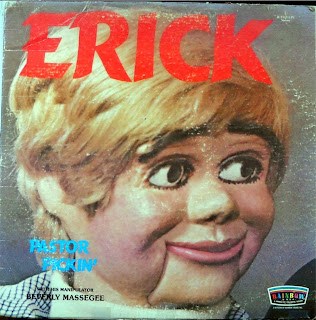 I've saved the best until last: the inimitable Erick on the Rainbow label, which (believe me) does not mean the same thing now as it did then. Or maybe it did, who knows. Erick's routine is called Pastor Pickin', which sounds so sinister I don't want to go into it. 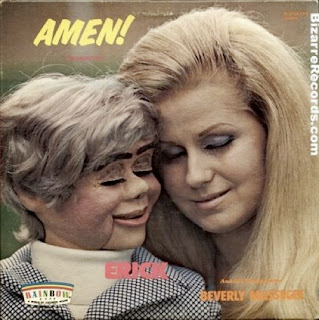 My personal favorite. The seeming eroticism of this, the way their foreheads touch, the way they lean into each other, suggests a love that dares not speak its name, because it's not just interspecies, it's - well, what DO you call having a thing for a ventriloquist's dummy? I'm not sure there is even a word for it. It took me quite a while to realize that Erick and his manipulator Beverly Massagee are PRAYING together, that's all. I mean it. And it's on the Rainbow Label, too.

Posted by Margaret Gunning at 12:51 PM