In the jungle, the mighty jungle


There are days, and this is one of them, when I am totally fed up with the internet. What started off as a potentially invaluable source of information has become a vast juggernaut, with useful stuff increasingly buried by the crap that is posted every day (and hardly anything is ever taken down). The more this stuff accumulates, the harder it is to find anything, which is ironic but is never mentioned. I won't get into the racism, the ranting, the hiding in the bluff behind cover of anonymity, so you can say any damn hateful thing you want.

But once in a while, you find the end of a thread, and you think,hmm, maybe it's not so freaking useless after all. The old magic returns, if only for a moment.

The series had some sort of title card with palm trees and birds and stuff on it, and there was this music. It was the weirdest stuff, because it seemed to have animal sounds in the background. Bird calls and stuff. There was very little actual music involved, just atmosphere. A piano was playing, and someone was rhythmically scraping something. You only got to hear a snippet of it while The Tarzan Show title card came on, but they'd also play a bit of it after commercial breaks (and there were a lot of them).

So was this, as they say, "a thing"? Did it still exist, could I find it?  How do you find something like this when the clues are so vague? I just started googling terms like "music with birds in background" and "bandleader who uses bird sounds" (for in retrospect, it's obvious this was some sort of lounge music). I was astounded at how quickly I scored a hit. Soon I was playing a video with this cheesy, lounge-y, '50s-style music, about as exotic as Dorothy Lamour in a sarong, which I had not heard in - um - four, or - seven, or - a lot of years.

What made me laugh is the realization that those aren't even bird sounds - they're band members squeeee-ing and hooting and rattling to sound like birds. Could have fooled me. I have no plans to cultivate a taste for the genre, which is called exotica(and here I always thought that had something to do with sex!). But at least now I know what it is. The internet still has the power to inform.

I don't know if Martin Denny got any royalties for The Tarzan Show, but probably not - they likely just stuck the record on and hoped for the best. As is almost always the case, I can't find any information on the actual video, which I think is quite lovely. Who knows how many times it has been pirated and passed around. But isn't that what the internet is all about? 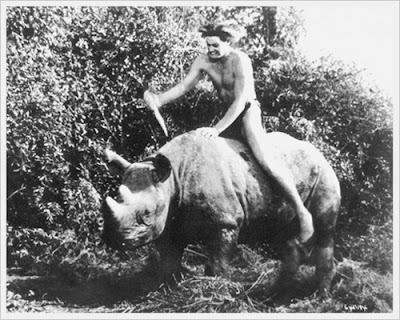 Please note. This is a summer repeat. I just saw a  couple of Tarzan movies and loved them so much that I just had to dredge up the gifs that went with this post. They took a lot of time, effort and love to make. Hope you enjoy them. I work hard at this, you know?
Posted by Margaret Gunning at 1:20 AM No comments: