Baby back ribs at Beach Bums!

We LOVED this restaurant on Maui, one of those pulled-pork-reggae-music-seaside-breeze places with a Surf Conditions report on the wall (never mind a weather report!). Nobody talked about wind; it was swell, which is, I assume, the way wind makes waves.

A swell place to eat, for that matter, so we came back a couple of days later, and I had the same thing: baby back ribs, cornbread to die for, pineapple coleslaw. Beach Bums brok da mout'.

Posted by Margaret Gunning at 5:46 PM No comments:

They're all just flip-books, really, these primitive motion picture devices, and the more-widely-known mutoscope (the kind you hand-cranked after putting a penny in a slot) mounted the individual photos on a turning barrel-like device. That way, the drama could last up to half a minute rather than a few seconds.

I made some of these flip-books as a kid, but they weren't much. I didn't have the means to take a Muybridge-like series of photos, one right after the other, and I certainly couldn't draw. But I do remember the image moving (sort of) as I flipped the pages, which seemed magical. I have a feeling not all the mini-movies in the above sequence are filoscopes (I have my doubts about the chair lady), but may have been taken from the slightly-more-sophisticated mutoscope. 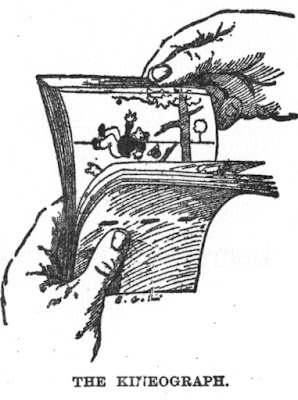 These were popular on "pleasure piers" during the Edwardian age, the penny arcade of the times, and some were somewhat naughty, even showing flashes of (female only, of course) nudity. This caused moralists to rant and rage about them, making them more popular than ever.

The San Francisco Call printed a short piece about the Mutoscope in 1898, which claimed that the device was extremely popular: "Twenty machines, all different and amusing views...are crowded day and night with sightseers." However, just a few months later, the same newspaper published an editorial railing against the Mutoscope and similar machines: "...a new instrument has been placed in the hands of the vicious for the corruption of youth...These vicious exhibitions are displayed in San Francisco with an effrontery that is as audacious as it is shameless."

In 1899, The Times also printed a letter inveighing against "vicious demoralising picture shows in the penny-in-the-slot machines. It is hardly possible to exaggerate the corruption of the young that comes from exhibiting under a strong light, nude female figures represented as living and moving, going into and out of baths, sitting as artists' models etc. Similar exhibitions took place at Rhyl in the men's lavatory, but, owing to public denunciation, they have been stopped."

The men's lavatory! But it's not surprising that the crude birth of the motion picture was tinged with eroticism, of witnessing the forbidden.  Even Muybridge, who called himself a scientist, was known to use comely nude females in his "motion studies". The association with peep-shows continued right into the early zeroes of the century, when quasi-erotic dances and tiny little bedroom dramas dominated. Early filmmakers had to be masters of economy of expression.

Posted by Margaret Gunning at 5:36 PM No comments: