Marilyn Monroe - RARE Version Of "I Hate A Careless Man "

I wasn't looking for this, at all - but strangely enough, it relates to what I WAS looking for: pictures from a photo shoot Marilyn Monroe did with Harold Lloyd in 1953. As a matter of fact, this video was taken during one of those sessions, as I was to find out on another site:

"It has been a puzzle to Marilyn fans for many years: the brief video clip where a swimsuit-clad MM, reclining on a poolside lounger, purrs, ‘I hate a careless man.’ It was shot at the home of Harold Lloyd, the silent movie comedian turned cheesecake photographer, in 1953. But little more was known about it. Now Immortal Marilyn‘s April VeVea has found the source of the mystery footage…

“Recently I was going through Marilyn Monroe’s IMDB page under the ‘Archive Footage’ tab. I was surprised to see her listed under a 1995 documentary, narrated by William Shatner, called Trinity and Beyond – The Atomic Bomb Movie. In it, a short 1953 PSA [Public Service Announcement], that was only shown to members of the United States Air Force, called Security is Common Sense is shown at the 47:35 mark. The PSA talks about using common sense measures when dealing with government secrets such as ‘avoiding loose talk, safeguarding top secret information, reporting security violations at once, and avoiding writing about top secret information when writing home.’ At 48:39 who pops up but Marilyn herself to end the PSA!” 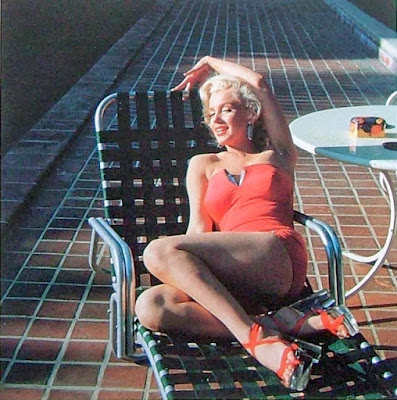 I am actually not a big Marilyn fan, but I need to keep feeding my Harold Lloyd Facebook page (for some reason - it has not resulted in a single book sale), so I decided to explore the Marilyn photo shoot a little further. What's surprising about these poses is the modesty of her strapless coral bathing suit, which she fills out with juicy peach-flesh sexiness - just Harold's kind of woman, busty and generous of thigh. But the really spectacular thing is - the shoes. The SHOES! I'm not even a shoe maven, but those towering Lucite platforms are enough to convert me. Tied on with Grecian crossed ribbons, they are truly the footwear of a goddess. I am sure in the above pose Harold was instructing her, "Now hold that foot out so they can see the shoe!" Whether Harold slept with her is a matter for conjecture, but apparently he "did" a lot of his models - or they did him, in some fashion, of which I have some idea. To be honest, Marilyn gave the best blow jobs in Hollywood, was not at all shy about performing them, and it took her very far. 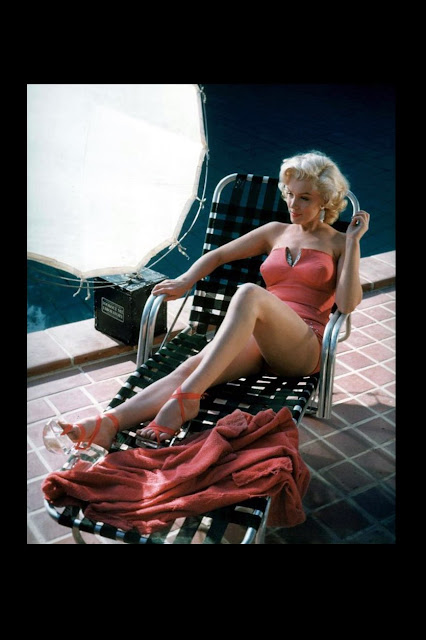 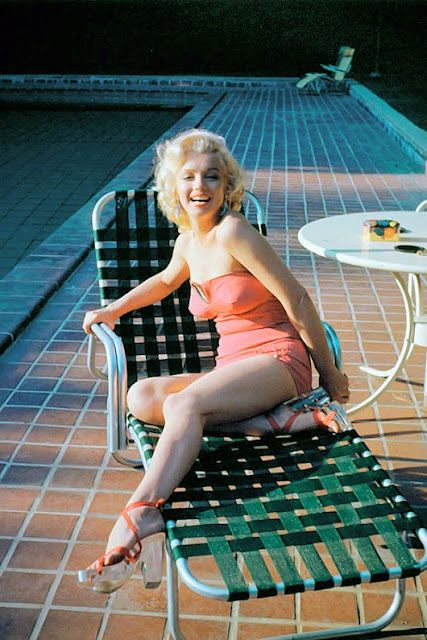 Posted by Margaret Gunning at 9:33 PM No comments:

The Way to Eden is one of the more memorable episodes of the original Star Trek series. Basically, it's about a bunch of space hippies searching for an idyllic planet called Eden, led by a sinister cult leader with stranger ears than Spock. Since this is a series of 15-second gifs strung together (one of my long-gif experiments), there's no sound, but you can hum along. Meanwhile, some memorable quotes:


"Many myths are based on truth, captain." - Spock, on the existence of Eden


"There are many who are uncomfortable with what we have created. It is almost a biological rebellion – a profound revulsion against the planned communities, the programming, the sterilized, artfully balanced atmospheres. They hunger for an Eden – where spring comes."
"All do. The cave is deep in our memory." - Spock and Kirk, on why Sevrin's followers embrace the primitive lifestyle

"They regard themselves as aliens in their own worlds – a condition with which I am somewhat familiar." - Spock, to Kirk


"Herbert was a minor official, notorious for his rigid and limited patterns of thought."
"Well, I shall try to be less rigid in my thinking." - Spock and Kirk, after Kirk was called Herbert


"Gonna crack my knuckles and jump for joy! I got a clean bill of health from Doctor McCoy!" - Adam, in sickbay


"I thought all the animals were kept in cages." - Chapel, when Sevrin's followers angrily try to enter sickbay "I am proud of what I am, I believe in what I do. Can you say that?" - Chekov, to Irina, in hallway after leaving sickbay with her.


"Because you disapproved of me, just as you do now. Oh Pavel, you have always been like this, so correct. And inside, the struggle not to be. Give in to yourself, you will happier, you'll see." - Irina, in response to Chekov ("Why did you stay away?")


"You don't belong with them! You know what we want--you want it too! Come! Join us!"
"How do you know what I want?"
"You're young. Think young, brother!"
"You make it tempting." - female space hippie, to Sulu

"Captain, I just had to give one of those barefooted what do you call 'ems the boot out of here. She came in bold as brass, tried to incite my crew to disaffect." - Scotty, to Captain Kirk, about one of Sevrin's young followers 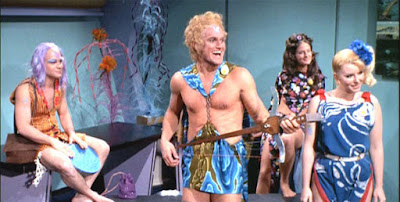 "I could never obey a computer."
"You could never listen to anyone. You always had to be different."
"Not different, what I wanted to be. There is nothing wrong in doing what you want." - Irina, before kissing Chekov


"I don't understand why a young mind has to be an undisciplined one."
"I used to get into some trouble when I was that age, Scotty, didn't you?" - Scott and Kirk, on Severin's young followers


"We cannot allow them to come after us. It will not reach us in here; I can control it all. I have adjusted it so that it will suspend its effects after a few moments and allow us time to escape. Then, after we've gone, it will automatically reactivate. Rejoice, brethren! Soon we shall step together into Eden." - Doctor Severin 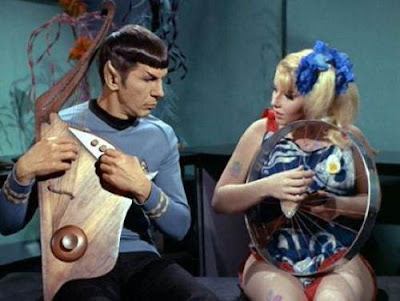 "His name was Adam." - Spock, seeing Adam's corpse next to the half-eaten fruit


"Be incorrect, occasionally."
"And you be correct."
"Occasionally." - Irina and Chekov, after their last kiss


"It is my sincere wish that you do not give up your search for Eden. I have no doubt but that you will find it, or make it yourselves."

- Spock to Irina, just before she leaves the ship

This one is an extra:

But I can't post this without a sample of the music. Here's the main jam: