Posted by Margaret Gunning at 4:47 PM No comments:

"I could feel his eyes accusing me!" 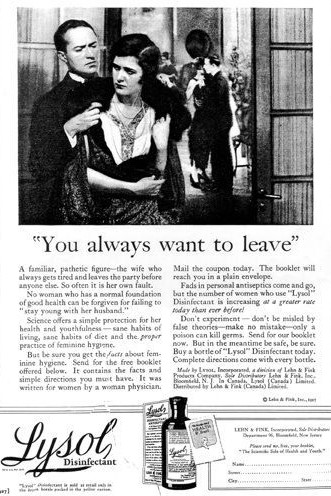 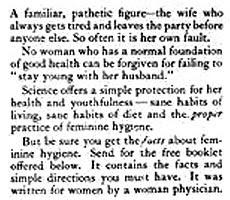 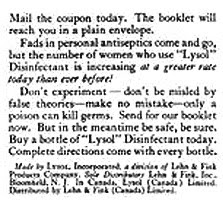 Ladies! Would you like a permanent solution to the inexplicable fatigue which makes you want to leave social events before anyone else? COULD IT BE that your fatigue is due to. . . vaginal odor?

According to "science", Lysol provides a "simple protection" for health and youthfulness (for nothing is more of a drag than an old, worn-out vagina). "Sane habits of living, sane habits of diet and the proper practice of feminine hygiene" will undoubtedly turn you into a cartwheeling party girl who doesn't want to go home until at least 5:00 a.m.

Remember! "Only a poison can kill germs". Stop using Lysol to disinfect toilets and get rid of cockroaches in the cellar! Send for our plain brown envelope TODAY.

BLOGGER'S P. S. I picked this ad out of the bundle I posted last time, because it seemed unusually cryptic. Of course it's a well-known fact by now that Lysol wasn't used as a feminine hygiene product at all, but as a form of birth control. You have to read very carefully between the lines of text to see how the pharmaceutical companies tiptoed around illegality, for advertising birth control was almost as illegal as using it.

This one may be one of the more bizarre entries, though many of these ads claim that marriages often end simply because the wife's genitals stink. No kidding, that's what they actually say. So she's supposed to use this carbolic substance (known to cause a number of deaths by ulcerating the inside of the uterus) to get rid of the horrendous stink and replace it with - you all know what Lysol smells like, right? And back then, it was 100 times more powerful and used a different active ingredient, because there were no regulations. 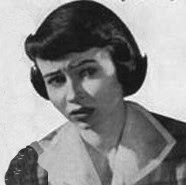 So this one. . . it's strange, but I can only figure out that the wife is exhausted and can't enjoy the evening because she's pregnant. Well, she's done it again! Now she can't "stay young with her husband", which I assume means keeping up with his sexual demands. The reference to staying young hints at midlife pregnancy, which was dreaded more than anything due to the possibility of Down syndrome and other late-birth calamities. Not to mention the heavy stigma that attended those births. It just wasn't seemly that people that old were still having sex.

These ads almost always talked about "germs" and "mucus matter" and other things that come perilously close to describing semen. The word "protection" always appeared somewhere. The sad thing is, though many women very likely fell for this and depended on Lysol, it just didn't work. Douches are likely to propel those little swimmers right up into the promised land. Better stick with Coca-Cola, which at least would be more pleasant a taste for hubby than a mouthful of chemicals.

(I just had an awful thought about the Pepsi Challenge, but I will keep it to myself.)

Posted by Margaret Gunning at 12:34 PM No comments: 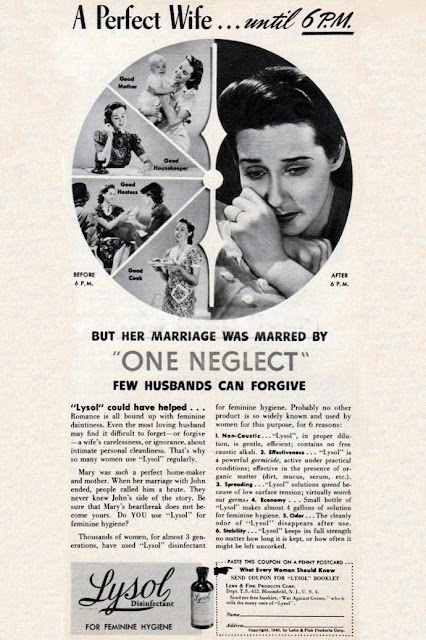 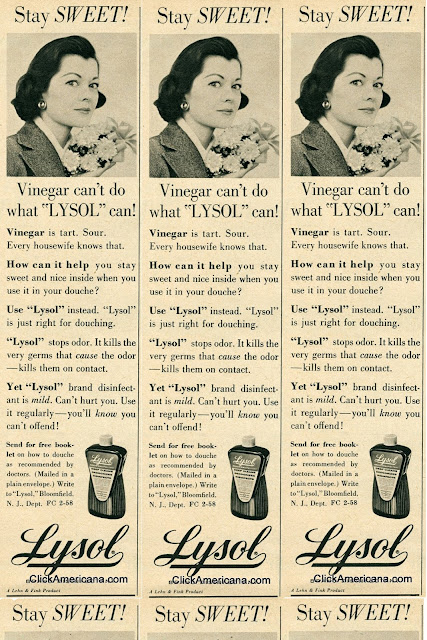 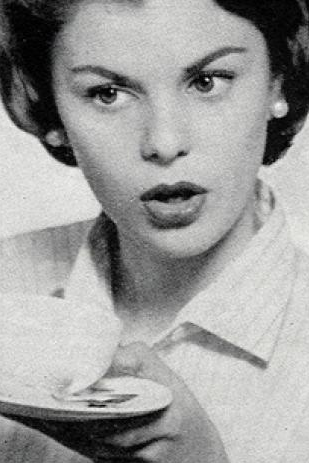 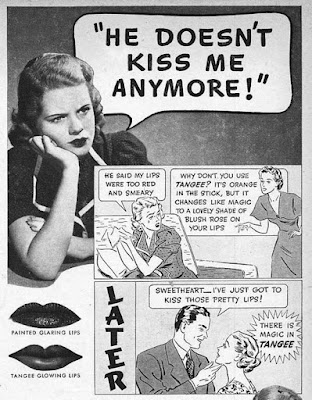 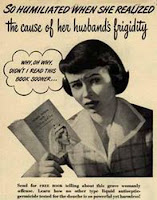 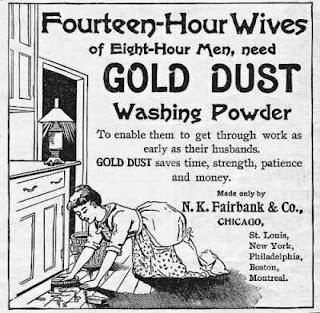 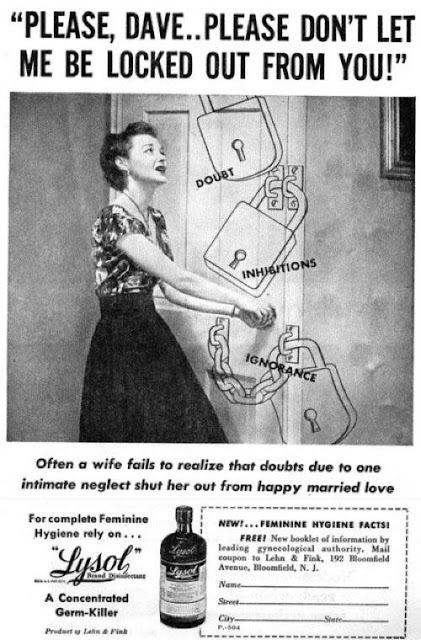 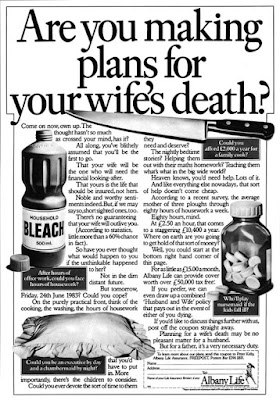 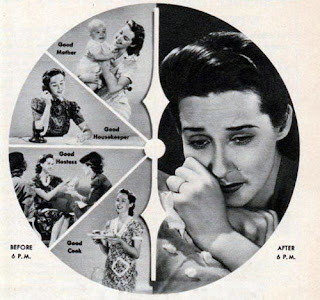 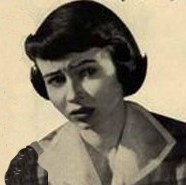 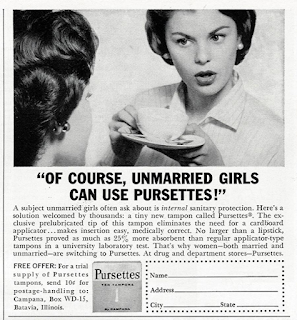 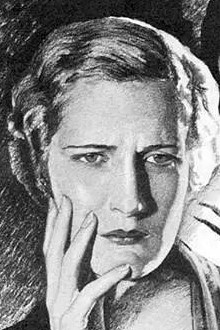 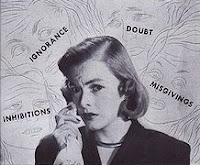 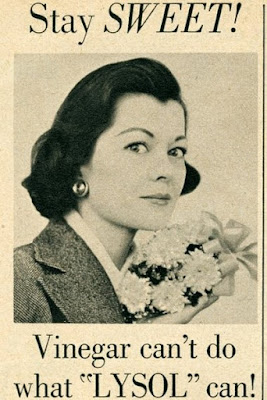 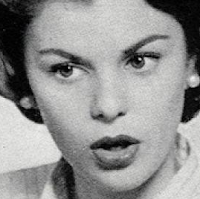 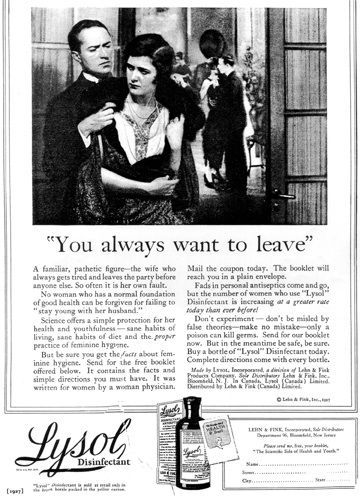 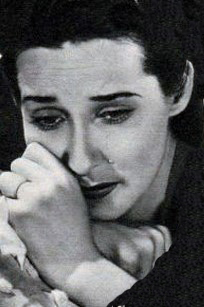 Posted by Margaret Gunning at 12:31 PM No comments: