You can never go home any more

My kind of town
my hometown was

My kind of town

a church made of bricks and boards
bannister slivers and varnish
old hallway, stained glass
school from the 1800s
squeaky floors
a purple runner on a communion table
horse pulling wagon with milk bottles rattling
a house made of glass and cedar
and the paste-white face of Milky the Clown

we sang the Elmer the Elephant anthem
here's what Elmer has to say
on the street you never play
pilgrims of safety
and obedience
an ivy-smothered brick partition
standing around the convent
old school        an old school
TV on all the time always the TV
Captain Jolly and Poopdeck Paul
showing up late for choir the gown that got dirty
oh come and join the happy fair
if wonders you would see
all down the front I shouldn't be eating in it
"my teacher's name is Mr. Service"
riding on my brother's back
a cat named Timothy
who crawled behind the stove

we sat in rows, I couldn't see anything
the seats folded up on our desks the sides wrought iron
you had to have a milk ticket don't forget your milk ticket
I sang in rows it was junior choir
a song came on the radio
Maple City Maple City
"it's the store with the heart in the heart of town"
and then we went to the Spudnut Shop

Posted by Margaret Gunning at 10:37 PM No comments:

Monty Python it ain't, but these crude animations of mine, my very first attempt, are perhaps inspired by the Edwardian cutouts of Terry Gilliam. A dear friend of mine gave me a book called A Catland Companion, years and years ago, and it sat on the shelf for ages. THEN came the power blackout on New Years Day that killed our internet connection for over a week (which, by the way, is the sole reason I haven't been posting).

I started looking for something to do, and rediscovered Catland. Hmmmm.

Could I - maybe - make something out of this?

I've been using a gif program to make little slide shows to post here (maybe you've noticed) - and I noticed they kept using the word "animated". Animated!  Animation is what I've wanted to do all my life! But having absolutely no talent in visual art - drawing or painting or anything else - I was sort of stuck.

But not TOO stuck, because I rediscovered Catland and its oddball denizens. I discovered they could be moved around and photoshopped in all sorts of interesting ways. I could not put them through the gif program, of course, so I was going on faith that they would look like anything. But these cats just jump off the page, don't they? And I hardly had to do anything with this little row of dancers, just bounce them up and down and reverse the image. In fact, it's the best one I did, and I did practically nothing.

Is it the Gilliam effect, I wonder, that caused me to make these cats do such violence to each other? Cartoon violence, of course, with no bloodshed, just a few mashed heads. These guys kind of jump around a lot. I was experimenting here, and ended up with considerable jerkiness. Gilliam's stuff doesn't move smoothly at all (does it?), yet he makes it work. Damn.

These two adorable kittens started out so promising, but ended up looking so strange, as if they're weightless or something. To compensate for the floatiness, I made the animation go a bit too fast, so they jump around each other. I wanted a hopping effect - almost a leapfrogging, and got two highly caffeinated kittens. I think this was the first serious one I did. I learned from this that I cannot do the required 24 frames per second that Disney required when animating Snow White. The main technical problem with these is that when I was making the frames, I had no way at all of knowing whether the animation was working or would look right or convey motion without jarring jerkiness.

This is a Louis Wain cat, and it shows. I suppose he'd turn over in his grave if he knew about this, but if people can animate Hieronymus Bosch, then I can make a Wain cat leer like a fiend from hell. It's a short step. Actually, this is one of my favorites, along with the kick-line of kittens. I may play with this one some more and make more expressions, repetitions or whatever. It seems too short.

I held out the most hope for this one, and was partially successful. It took me the longest. The original drawing looked like this, and it was all I had to work with: 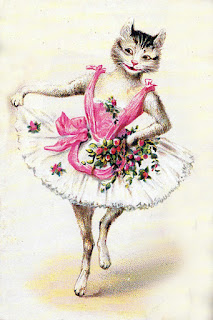 This is a nice example of anthro - anthropo - whatever, making the cat look human, but not TOO human. Those ain't ballerina legs and feet, folks - they're animal, but in a weirdly human position. So what can I do here? I had to detach arms and legs and twist them around and try to get them back on again. It was hard. It was also necessary to remove the shadows on the floor so I wouldn't have to keep reproducing them consistently. I just don't have the equipment to do that. But it sort of came out all right. I kept tweaking the frames, and I guess I could tweak them some more.

But I'm waiting for the next blackout.

Posted by Margaret Gunning at 5:52 PM No comments: