It's a wonderful life? If you say so

This thing comes on every year and I get caught up in it, even worse than Taxi Driver.  And I forget every year that it's the longest, most suffocating piece of melodrama ever created. A festive favorite about a man who wants to commit suicide because his life has been an exercise in futility and failed dreams, capped off by a totally unfair charge of bank fraud.

This guy George, see, he's kind of, waal, waal, disillusioned. His Uncle Billy, who's half nuts but was the father in Gone with the Wind so sort-of famous, has lost the eight thousand dollars that the Bailey Savings and Loan has earned in the past fifty years or so. He sort of dropped it somewhere and the Big Fat Man, the Bad Man, Lionel Barrymore in his most Grinchimous role, went and spent it on a hooker or something. 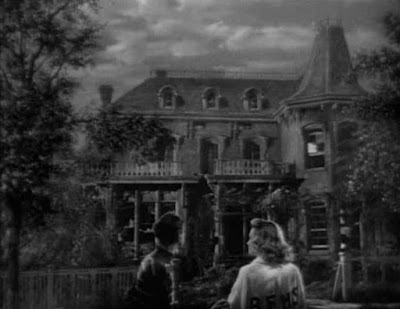 So this George, he, waal, decides he's worth more dead than alive (do I hear silver bells?), and stands there not jumping off a bridge. Then this old guy in a nightgown jumps off the bridge, and. . . the rest is history.

Oh, I shouldn't be so cynical, but this thing - this long thing, this three-hour marathon of hopelessness and small-town suffocation - it's about the farthest thing from festive you could imagine. Even Scrooge has glimmers of hope in it, but this - . George acts like some sortofa downtrodden saint for two hours and forty-nine minutes, then he kind of explodes and screams at his wife and family and tells them he basically hates them for holding him back and completely destroying his life. 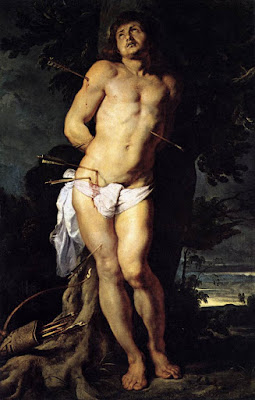 OK, I have a few problems with the logistics of this thing. When they get married and have to give all their money away to save the bank, Donna Reed gets chickens going on a spit in this old ruin of a house, the one they used to throw stones at for luck. And they move in to it? make it habitable? On his salary of $2.70 a week or whatever-the-frick-it-is? Raise a family? George wears the same suit for 17 years, for God's sake.

Jimmy Stewart overacts. I'm sorry, but he does, he overshoots. He smears his facial features around with his hand, his hair is wild, he looks like a candidate for the psych ward, and finally he mumbles to his hokey old guardian angel (the guy in the funny shirt that ties up in front because buttons hadn't been invented in the year 1300) that he wishes he'd never been born at all. 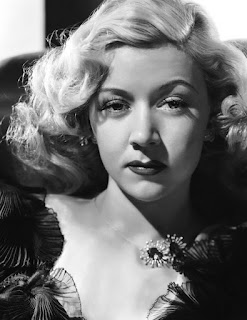 Kind of the ultimate in nihilism, wouldn't you say? Jimmy Stewart, the guy with the 6-foot imaginary pet rabbit, the guy in whatever-else-he-was-in, all those Westerns and Mr. Smiths and whatever, attempting to annihilate all traces of his existence on earth. A holiday special? OK, another big problem. He has this obnoxious friend named Sam Wainwright who keeps saying, inexplicably, "hee-haw". A dumb-ass par excellence, he lucks into a strange new business just before the war breaks out:  plastics. This assures he'll be obscenely wealthy doing no work at all.

He's George's best friend, for blippin' sake, and George is all stressed out and wanting to kill himself over 8 thousand dollars when 8 thousand dollars isn't even POCKET CHANGE for Sam Wainwright. In the dramatic ending when everyone turns their linty little pockets inside-out for George, he gets some kind-of-a cable from Wainwright saying, in so many words, "your measly little problem that you were willing to die over is peanuts to me. I'll give you three times that amount and change. There, feel better now?" 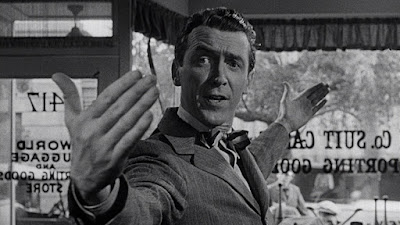 I doubt if he would. But think about it. Would Wainwright ever let George be dragged off to jail for such a shabby little amount? Money is power, right? Wainwright could make Old Man Potter dance like a jerky little marionette on a cold winter's night, and George is all stressed out about jail? (I liked his idea that Uncle Billy should go, instead. Made sense to me.)

But hey. He might get conjugal visits from that, who's that little floozie anyway? Jeez, what's she doing in this thing which is supposed to be a family show?

Oh, oh, and I just thought of this: it gets me every year. Why is it that after George yells at Uncle Billy that he's a mental defective, a moron and a lunatic, a squirrel jumps up on his arm? What the - ?? a squirrel? Up to now we've only seen ravens, tortoises, cows, etc. Could this be a foreshadowing of the squirrel from hell in National Lampoon's Christmas Vacation? (Actually, it screams of "cut the animal scenes, this thing is running too long." But for some reason they left in the squirrel.) 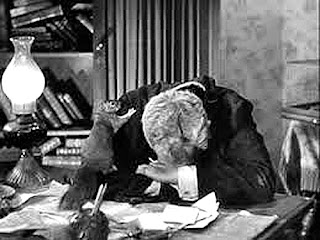 Not only do the writers of this thing obviously not know who the President was then, but Mother must be able to teleport herself from Washington to Bedford Falls in a matter of seconds! Hey, lady, tell me how you can be in two places at the same time and I'll buy the patent.

Another thing, and I noticed it again when I watched it tonight. This is the place where I'm tempted to think they're kidding us, just seeing how far they can go with George's personal hell, to the point of near-satire. It's the scene where George asks Clarence where Mary is, and he can't even tell him because it is just too horrible. Finally he pries it out of him. She's . . . she's. . . a librarian! Might as well say she's Bathsheba or something, or her body is hermetically sealed because she "never got married".  So out comes Mary from the library like some shaggy-eyebrowed vision of frumpster hell. It is the ultimate macabre detail in a movie which is somehow or other very dark indeed.

But I gots-ta confess to one thing. No matter how I prepare myself for it, no matter how cynical I try to feel, no matter how cornball I know it will be (and it is), that final scene has me bawling every time. Just bawling. I don't know what it is. The generosity of the people. The look of astonishment on George's face. Zoo-zoo's petals. Beulah Bondi, beamed down from the planet Zargon. 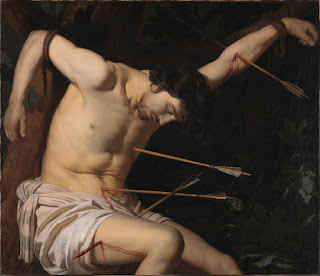 I remember a superb SCTV satire of this scene, in which a succession of ever-more-notable people kept sweeping through the door, from George's brother to the President of the United States to, finally, His Holiness the Pope. It's a potent fantasy, all right - one we wish would come true for ourselves. That one day, in spite of futile sacrifice and grinding toil and zero recognition, something wonderful will happen to make us see that it has all been worthwhile.

This has something to do with the American work ethic, always handing the glory to someone else like that ratfink brother-who-got-the-Congressional-Medal-of-Honor-while-we-got-stuck-with-goddamn-rubber-drives-during-the-freaking-war. Let's face it, there are more Georges than Harries in the world. We all have our lunatic uncles, our goddamn rubber drives. Our eight thousand dollars.

And if George hadn't-a saved Harry when he slid down on that slippery old thingammy on the ice, waal then -

Please note. This is a repeat. It's something I've run a couple of times now, but I just watched the movie again - or the last 45 minutes of it - by accident - and decided this piece is still relevant. Sort of.

Posted by Margaret Gunning at 1:06 AM No comments: