"What could possibly go wrong?": Inventions from the nasty past 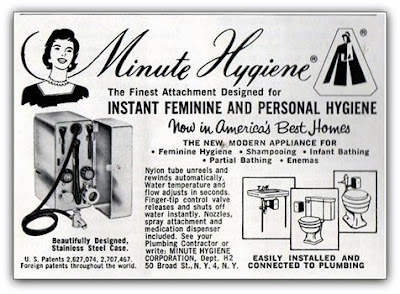 Call these "un-ventions". Things the inventor should have thought twice about. Things that might even be hazardous to your health and wellness (and wellbeing and stuff).

How many of these all-purpose-douche-and-enema machines did they sell, anyway? And you could wash the dog with it, too. Come to think of it, that's not such a bad deal. But boy would you ever need to clean the contraption between uses. 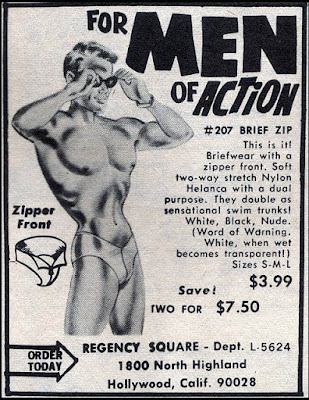 Hmmmmmm. That "word of warning" tells the whole story here, as does the "dual purpose" bit. I think these things are designed for ease of access, and I don't mean for taking a tinkle. And do you know what, I would NOT want to get caught in my zipper while wearing one of these. 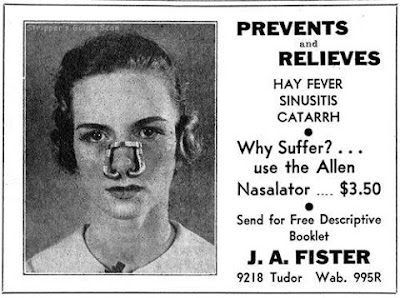 This thing, this evil metal nose clamp, is supposed to prevent pain from hay fever, "catarrh", etc.? What the fuck IS catarrh? Is this something the human race used to get, but just doesn't get any more, or does it just no longer exist? Perhaps, like quinsy, lumbago and grippe, it simply went out of style. But hey. . . maybe that means that this contraption actually worked!

I'll try not to comment on the name of the inventor. 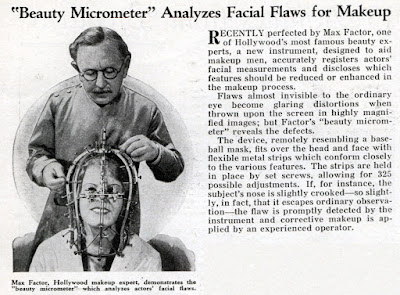 This is another evil thing you stuck on your face. I don't think this cured catarrh, or cat-gut-guitar or whatever, just "analyzed facial flaws" - and if the contraption is any indication, this poor woman is ALL flaws. The guy is obviously a sadist: this thing has 325 screws in it that can be tightened any way he wants. 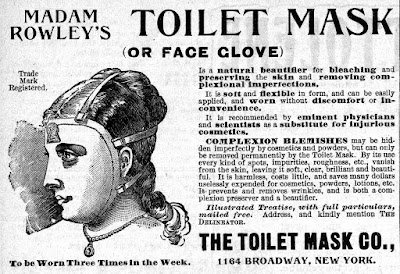 A related issue is the Toilet Mask or (even more sinister-sounding) "face glove". I can't help but be reminded of This Is Spinal Tap's album, Smell the Glove. They still sell things that look sort of like this, things that strap on to a woman's face and make her look like Hannibal Lecter. 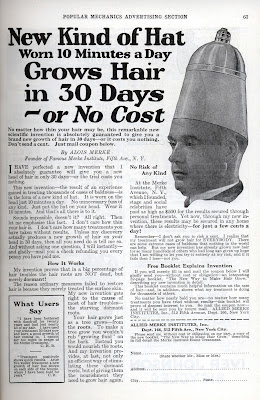 Hey, it's a new kind of hat, all right. A fake hat. A charlatan hat. A faux hat. A phony hat. A hat-that-doesn't-really-grow-hair. But if it didn't work, you could get a job as a chef in a robot factory. 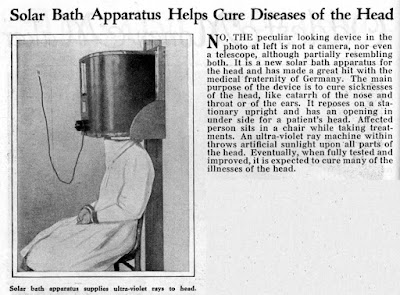 I looked at this ad with great puzzlement, trying to figure out just what they meant by diseases of the head: mental illness, perhaps? Or was the inventor of the device perhaps thus afflicted? Then I read the description, and there it is. . . CATARRH! So catarrh, we've finally deduced, is a disease of the head. But you've got to get one of these to cure it, and unfortunately they stopped making them in 1932. 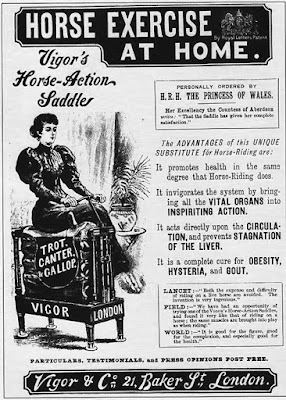 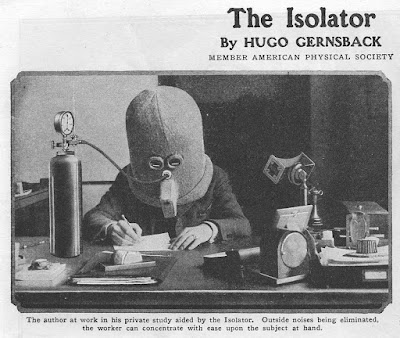 I don't understand this thing - looks like he has some sort of beehive on his head, or an underwater device, except that it's made out of felt. I've seen fabric cocoons that you can wrap around yourself, but this - is that a fire extinguisher or an oxygen tank sitting beside him? What are all those gizmos and egg-slicer thingies on his desk? I don't know if I want to get too deeply involved. 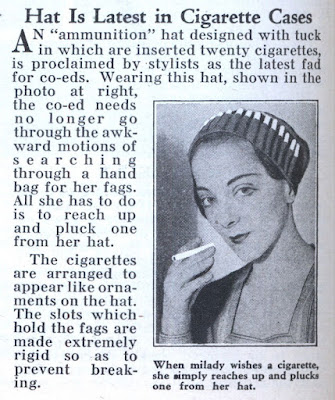 And your hair would smell just great!

This has the largest cringe-factor - no, wait. That one is coming next. But when you see the little naked baby under a sun lamp, you just die a little bit inside. If you want your kid to Stay Brown Th' Year Round, this is the way to go - until Child Protection finds out about it. 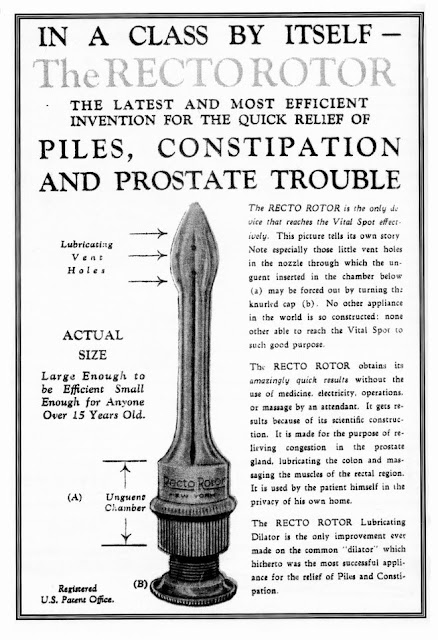 And I am truly sorry for this one, but I had to include it for the sake of historical accuracy. A long, long time ago I posted instructions for prostate massage, not because I was interested but because it read like a translation of a translation of some indecipherable foreign language (I won't say "tongue"), and thus was rendered virtually incomprehensible. This thing gives a whole new meaning to one of my favorite expressions, "Sit on this and rotate". It is obviously a dildo, one which needs to be well-lubricated for use: "Note especially those little vent holes in the nozzle through which the unguent inserted in the chamber below may be forced out by turning the knurled cap."

I cannot say another word about this. 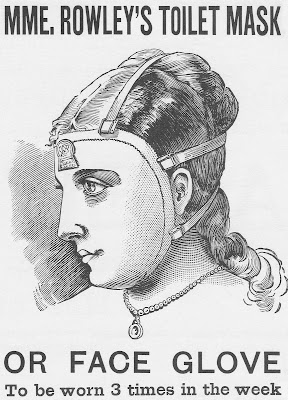 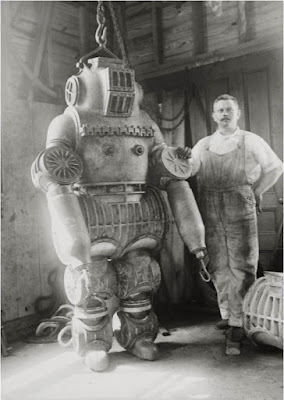