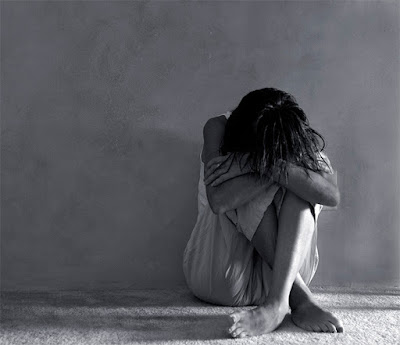 After great pain, a formal feeling comes –
The Nerves sit ceremonious, like Tombs –
The stiff Heart questions ‘was it He, that bore,’
And ‘Yesterday, or Centuries before’?

The Feet, mechanical, go round –
A Wooden way
Of Ground, or Air, or Ought –
Regardless grown,
A Quartz contentment, like a stone –

This is the Hour of Lead –
Remembered, if outlived,
As Freezing persons, recollect the Snow –
First – Chill – then Stupor – then the letting go –

Posted by Margaret Gunning at 10:16 PM No comments:

Email ThisBlogThis!Share to TwitterShare to FacebookShare to Pinterest
Labels: 2016, November 8

Do tomatoes scream when sliced? 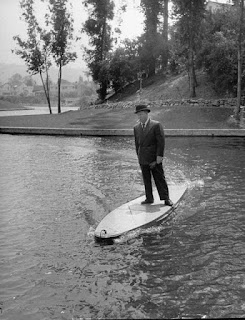 Back in 1948, there was apparently nothing weird about riding across a lake on a motorized surfboard while wearing a nice suit and bowler hat and smoking a cigarette. Forget his lack of safety gear – inventor Joe Gilpin looks cool gliding along on the water. 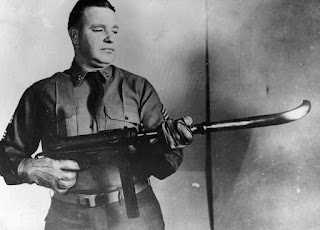 The 20th century saw many astounding technological innovations. The automobile revolutionized the way people live and work, the internet changed the way people think about information, and the U.S. of A put a man on the moon. But some technological advances that came in the earlier part of the 20th century weren't exactly meant for the history books. Because they were stupid. Take, for example, this M3 sub-machine gun with a curved barrel for shooting around corners. It's the perfect gun for the "shoot first, look where you're shooting later" kind of guy. 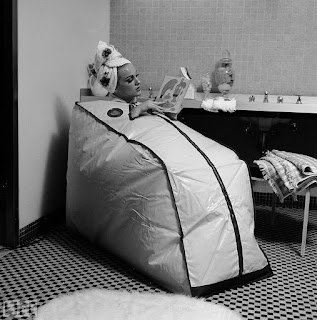 You can carry it anywhere and everywhere. Like, office, public washrooms, even in public transport. 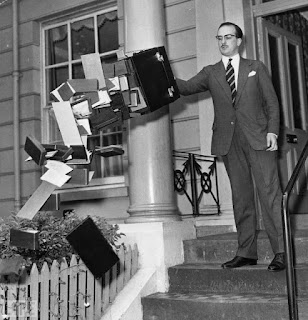 Inventor John H T Rinfret demonstrates his anti-bandit bag. To foil thieves the chain is pulled and the bottom of the case falls out so the contents are scattered over the floor. That'll stop those thieves from getting at the contents of your bag! No, wait. It won't. 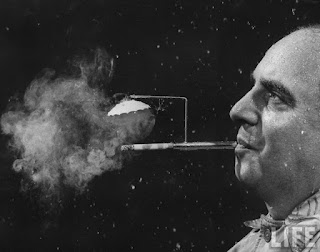 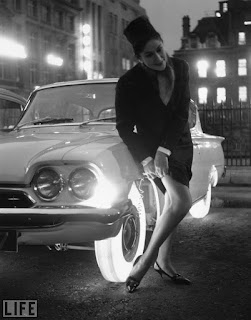 A woman adjusts her stocking by the light of the Goodyear's illuminated tires. The tire is made from a single piece of synthetic rubber and is brightly lit by bulbs mounted inside the wheel rim. 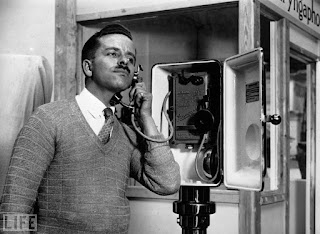 A man at a shipping exhibition in Olympia, London, demonstrating the ''Laryngaphone, '' a noise-excluding telephone which only transmits vibrations from the vocal chords when the microphone is placed against the throat or cheek. For the man who wants to annoy both his wife and his mistress.
(Blogger's note: not to be confused with Sonovox). http://margaretgunnng.blogspot.ca/2016/11/incredible-sonovox-do-not-listen.html 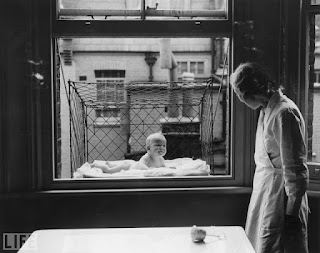 A nanny supervising a baby suspended in a wire cage attached to the outside of a high tenement block window. The cages were distributed to members of the Chelsea Baby Club in London who have no gardens, or qualms about putting a child in a box dangling over a busy street. 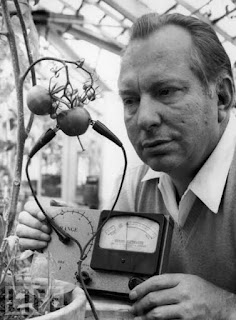 American science fiction writer and founder of the Church of Scientology L. Ron Hubbard uses his Hubbard Electrometer to determine whether tomatoes experience pain, 1968. His work led him to the conclusion that tomatoes "scream when sliced."