This is my Bentley!

My lovely Bentley. Sweetest cat EVER.


Posted by Margaret Gunning at 9:57 PM No comments:

Grab yourself a pussy: NOT!

If the Windsor/Essex County Humane Society wanted to court Donald Trump levels of controversy with its latest cat adoption ad, they surely got it on Wednesday morning.

The organization received multiple complaints — and hundreds of social media shares — because of an advertisement that made explicit reference to Trump’s infamous “grab ’em by the pussy” comment.

“You don’t have to be a star to grab a pussy… cat,” the ad joked, informing the public that all shelter cats over six months old can be adopted for $50 from Oct. 19 to 23.

Reaction was swift. “Tasteless” and “vulgar” were common responses. Some members of the public decried the ad as perpetuating “rape culture.” Others found it humorous — no different than a joke one would hear from a late night talk show host.

Blogger's Blather. This steaming nugget from the National Post (a. k. a.  "Postmedia", which to me sounds like an obituary for the death of rational journalism) talks about an uh-oh committed by the Windsor Humane Society. Myself, I think it was stupid of them to use Trump's pussy-grabbing remarks as a cheap way to get attention for their cause. It's still too sickening to be funny, as far as I am concerned, and probably always will be.

Besides which: it's damn disrespectful to the cats!

But I was interested to find that prior to this campaign, which has been much reviled and Tweeted to death on social media, PETA did something very similar in its ad campaign for adopting cats. 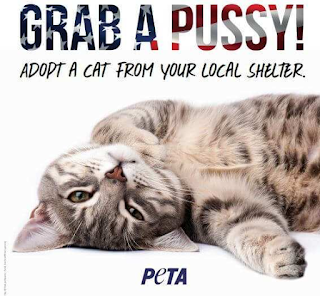 So what's the difference? some people are saying. Well. . . PETA blows things up, and the Humane Society doesn't. So people are more afraid of PETA. They set up hidden cameras in hog farms and stuff, then get the footage shown on W5. I know they probably do some good, but fanatics of any stripe (even a striped cat like this one) frighten me because they have lost their perspective. Without perspective, the human race is pretty much doomed.

I prefer the PETA ad because it's simple, clean-looking, and has one graphic only, of an adorable kitty. The Humane Society threw everything into the cement mixer, including an obnoxious picture of Trump inside a star (one of those American flag thingies - in fact, the American flag is all over this ugly, garish thing). The cats in it don't look like any cats I would want to adopt, or be in the same room with. They're anxious and paranoid and even angry.

This points up how the same idea can be handled in radically different ways. I don't particularly like what PETA did, but it's OK, I guess, and the other one just isn't. It's loud and jangly and anxiety-provoking - just plug-ugly, is what it is! It gave me a migraine, whereas the other one is just

What's that - image - behind the lettering on GRAB A PUSSY?

Hard to see at first, isn't it? - but it's the American flag! So this thing is hardly neutral. It's almost subliminal in its effects. Sneaky. Is there a microscopic image hidden somewhere of Trump doing that tunnel-mouth thing, or perhaps grabbing someone's . . . cat?

This wasn't the direction this blog post was going to take. At all. Originally, I made the usual mistake of looking at the comments section. The National Post readership sound so right-wing they'd be right at home in the Trump cult. Most of them were delighted with all this pussy-stuff. They thought it was "a scream". Like most National Post fans, they're dull and stupid and don't have the wits to know it.

All I really care about is the cats. I showed this to Bentley, and he turned ass immediately and walked towards the litter box. 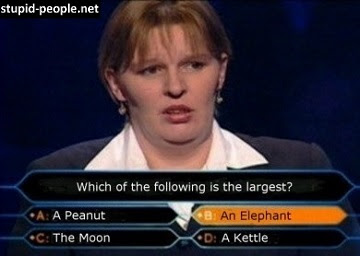 Sample Comments (with responses by a friend of mine named Ed):

Windsor West MPP Lisa Gretzky was not amused, stating she was “profoundly, deeply disappointed and disturbed” by the ad. What a bunch of snowflakes! The ad is funny, but to these idiots that feel unsafe and offended, go to your room. PC morons!

The world is a wonderful place too bad its just overflowing with people looking for something to be offended by. (Ed.: And with people who can't write.)

Farewell humour. It was nice having you around until the brigades of the "progressive" SJW's came streaming forth from their safe spaces in their quest to see who could become more enraged and offended.

Wikileaks, Guccifer, even the FBI has put out a tonne of information this week showing the deep level of corruption surrounding Clinton. This is what rises to the top of NP stories. (Ed.: Bravo! . . . What the hell did it mean?)

What moron would complain about this brilliant, humorous and socially relevant ad campaign? (Ed.: I would.)

If this means a few more homeless cats get a home, I'm for it.

Shows how far the Lefties are out of touch with normal people! (Ed.: this raises the horrifying spectre that "Righties", i.e. Trump enthusiasts, are 'normal people'). 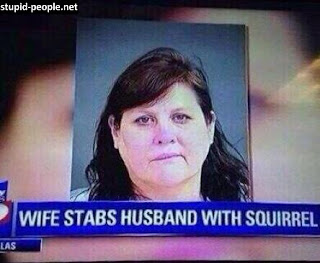 I agree. Delicate flowers for sure if this campaign bothers you. Canadians are smart enough to know that the ad is totally tongue in cheek, tough enough to handle it and intelligent enough to separate out cat adoption from sexual assault. I guess if you are offended by the ad then you should go out and adopt a cat or two so that no advertising is needed to help out homeless cats...

Great! What a scream!

They have a bunch of Pussy's in Washington now! (Ed.: Pussy's WHAT? What belongs to Pussy? Explain it to me!)

Even I would have double checked that thought......

The end of humor brought to you by 'progressives'

Posted by Margaret Gunning at 9:40 PM No comments:

Posted by Margaret Gunning at 3:37 PM No comments: