FOUND: unseen footage of the Challenger disaster (for real!)


Posted by Margaret Gunning at 10:05 PM No comments:

Email ThisBlogThis!Share to TwitterShare to FacebookShare to Pinterest
Labels: unseen amateur footage of the challenger disaster 1986

Creepy clowns? Give me a break! 
ORIGIN:On 3 October 2016 the Global Sun web site published an article reporting that weapons-wielding clowns from the U.S. had invaded Canada and murdered 23 victims there:

As it’s getting closer to Halloween, what seemed to be a harmless joke at first, suddenly turned into a serious matter with the police. What started off as reports of creepy clowns luring around neighbourhoods in the US, has suddenly escalated to another level. It is believed that the surge of clowns spotted wielding weapons originated from some states in America, but has made it’s way up north.

There was no truth to this story. The Global Sun is a fake news web site that does not publish factual stories, as noted in their disclaimer:

The Global Sun is a satire website, articles/post on the website are all made-up stories and should not be taken seriously. 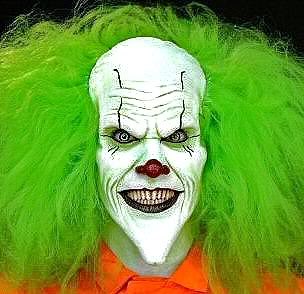 This fabricated killer clown story was published in amidst numerous reports of clown sightings in the United States. In August 2016, residents of Greenville, South Carolina reported that clowns were attempting to lure children into the woods. A few weeks later, the clowns had migrated to North Carolina, and since then scary clowns have been reported in various locations across the United States — although actual evidence of their existence is lacking:

But amid all of these reports, no clowns have been photographed. Police investigators have found no traces of clown activity. Not even a stray red nose or a strand of blue hair.

So what are these insidious creatures? According to one clown expert, they’re probably “phantom clowns.”

Fake news web sites have taken advantage of the recent uptick in coulrophobia to publish bogus reports about clown-related deaths. However, clowns did not kill 23 people in Canada, nor was a clown shot in Fort Wayne, Indiana.

BLOGGER's COMMENTS. OK then. . . From the very beginning, the "creepy clown sightings" reports made me groan. There was more than a faint smell of bullshit about them, but everybody seemed to be getting on the bandwagon and reporting it as straight news - including CTV, the Vancouver television station my daughter Shannon works for as a reporter.

The other day, a school in Vancouver had to be put on lockdown due to high school kids in creepy clown costumes chasing after kids. So is this a copycat crime of a NON-crime?

What probably disturbs me the most is how quickly pure fabricated bullshit becomes actual news. If it's on the internet, no matter how hokey the site, it MUST have happened, and it is replicated and replicated without ANYONE checking to find out if it's factual or not. So much for getting it from three sources. That just takes too long for today's lightning-paced media demands, so you just grab whatever pops up, anywhere.

I see this in coffee rooms and bus stops and everywhere people casually talk (not that they do any more: too busy looking down and wiggling their thumbs). "Did you see that story on the blah-blah?" "Yeaaaaah. . . it's really awful, isn't it. The world is getting so violent." Never mind if the item appeared in the Bogus Satirical Fake Parody News, or if other stories on the same site were along the lines of "man eats 5000 gallons of ice cream in 5 minutes and dies on the street".

So I'm not sure what is going on. I'm going to ask Shannon.

A letter was sent home to parents in Langley, B.C., after students reported being confronted by someone wearing a clown mask.

A U.S. trend is making its way into Canada. Creepy clown sightings are becoming frequent and freaky. CTV's Kevin Gallagher reports. Police forces and school districts across B.C. are urging caution as a bizarre trend dubbed the "clownpocalypse" on social media triggers arrests and school lockdowns.

It comes in the midst of a string of "creepy clown" sightings in Canadian cities including Toronto, Halifax and Edmonton, as well as many U.S. cities. The phenomenon has also involved threats made on social media, and usually involves vague warnings about violence at schools.

Why are we so afraid of clowns?

In this file photo from 2015, a man dressed as a horror clown is pictured when thousands of revellers dressed in carnival costumes celebrate the start of the street-carnival in Cologne, Germany, Thursday, Feb. 12, 2015. (AP Photo/Martin Meissner

That's prompted action by police forces in British Columbia. Surrey RCMP are asking the public to report any unusual clown sightings after a terrifying incident Wednesday night where a man wearing a clown mask jumped out of the bushes and chased four teenagers.

"He was carrying something in his hands that may have been a baseball bat. The male was laughing as he was chasing them," said Sgt. Alanna Dunlop. No one was injured but the force is taking the incident very seriously.

In nearby Langley, a stranger wearing a clown mask apparently approached middle school students on their way to class, which prompted a note sent home to parents. "On two recent mornings students have reported being confronted by a stranger in a clown mask on the way to school," the letter dated Thursday from HD Stafford Middle School reads. Principal Shawn Davids said the school administration and RCMP believe there is no immediate danger to students, but advises students to walk in pairs and avoid distractions like iPods and text messaging.

“Out of an abundance of caution, it is recommended that students walking to school be vigilant in the coming weeks as we approach Halloween and in light of the ‘creepy clown’ internet phenomenon being reported,” Davids wrote. Two teens in Prince George, B.C., were arrested after a posting a clown-related post on Instagram that read: "Every school in PG is about to get hit."

The post prompted a partial lockdown at a local high school. RCMP said at no time did its investigators believe the threat was credible, but officials asked all area schools to keep children inside and lock all external doors.

"Although we had no evidence that indicated violent action would take place, police were deeply concerned about the threats and acted with an abundance of caution," Cpl. Craig Douglass said.
The 17-year-old taken into custody was released without charges, but the 16-year-old was scheduled to make his first court appearance Friday and criminal charges are being considered.

More threats were reported to local schools on Friday, prompting six area high schools to be briefly locked down. RCMP investigators in the latest case determined that the threats were not credible and, in some cases, outdated.

With an increased police presence posted at schools in the Prince George area, Douglass said the investigation into the threats was tying up resources "that could be better used responding to where they are truly needed." 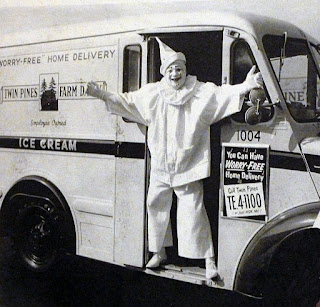 The clown pranks are drawing serious police resources to American schools, where every threat is taken seriously.

It's even drawn concern from the White House.

Social media users have been documenting the prank phenomenon under the hashtag #Clownsightings. 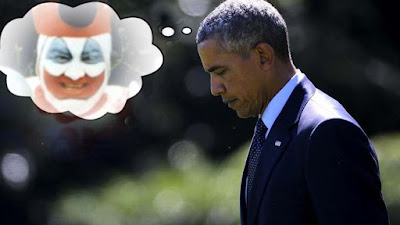 OK, the emphasis is mine, but doesn't this sound like Prank-o-Rama or a Prankfest to you? Who has actually gotten hurt in these things? Isn't this just a case of a high school kid in a dollar store mask running around in circles after a screaming little kid, her fear whipped up by her gullible, know-nothing parents?

The blue/italic portions indicate that the cops really think the whole thing is bullshit, but they dare not say so. Hey! It says there are creepy clowns ON THE INTERNET. So it must be true.

RELATED BLOG POST (one of my better ones, I think!):

Addenda. WHY we are afraid of clowns. The Experts Speak!

So-called “creepy clown” encounters are making people nervous across Canada and the U.S.

The sightings may be part of a viral trend that swept into several U.S. cities, where there have been reports of clowns terrorizing children and stalking people in the street. But why are we so scared of clowns to begin with?

Child and adolescent psychiatrist Steven Schlozman says it has something to do with how clowns are portrayed in popular culture.

“They are supposed to be fun, but they have been part of the horror canon now for awhile, at least 20 years and probably more,” Schlozman told CTV News Channel on Thursday. 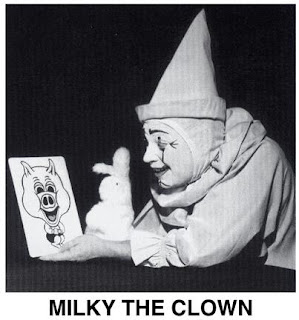 He points to films and television shows that have taken the idea of a fun-loving, happy clown and turned it on its head, introducing the maniacal killer character clowns into our thriller lexicon.

“We know what a person looks like -- they’ve got two eyes, a nose and a mouth, and so do clowns,” Schlozman said. But with clowns, their facial features are exaggerated and “grotesque.”

In addition, their features are frozen or “stuck,” says Schlozman.

Schlozman acknowledges some of the fear of clowns is circumstance.

“I think clowns at the circus or a birthday party are not that scary,” Schlozman said. “Clowns in your backyard – that’s a little creepy. I wouldn’t want to see it.”

Posted by Margaret Gunning at 3:17 PM No comments: