An obsession I return to over and over again is the creepiness of dolls, rivalled only by the creepiness of clowns. Both are meant to bring joy and pleasure to small children (or rather "children of all ages!", as they say at the circus). Come to that, circuses are pretty creepy too, or at least the circuses I saw as a kid:  tawdry is a better word, with sad elephants, bad smells and clowns who had probably seen better days and likely fuelled themselves from a flask.

This is the first video I've found with a complete set of Edison Talking Doll recordings. Or, at least, I fervently pray it is a complete set and I won't find any more. God only knows where they got them, as I would've thought the wax cylinders would have melted down by now. 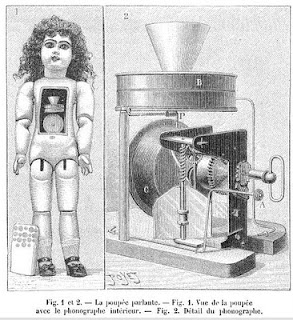 The dolls had a most un-cuddly steel  body with holes in it to concentrate the "audio". I think either the crank or the cylinder broke down almost immediately. Did this freak out kids? It might have filled them with wonder. Even some of the stranger dolls from the 1960s were seen as completely charming, like the one who had different facial expressions when you wrenched her arm around (and what was her name, anyway?), or the one who said creepy things like, "I can see in the dark" and "I wish we were twins". 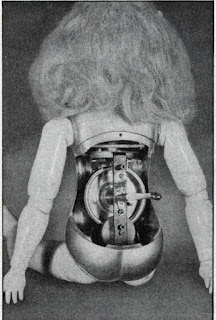 "Doll" has taken on a whole new meaning. When I first heard about "reborns", they were dolls with realistic-looking arms and legs and head, and a cloth body like a conventional vinyl doll. And they were vinyl. Originally, you just took a vinyl doll and mucked around with it until it looked more-or-less real.

Soon the dollmakers upped the ante, placing beating hearts in these things, heaters, voice recordings so they'd cry and coo, and even the capacity to wet and (I think) poop. Jesus, you might as well just have yourself a real kid!

But soon that wasn't enough, either. I began to see dolls molded out of silicone, one-piecers I mean, their limbs jiggling like a rubber frog's. These were so "lifelike" they scared the hell out of me. One of these might run as high as $10,000.00, though I just found this one on eBay:


Though it's described here as "full silicone", I have a feeling it's the kind of doll you might find at a dollar store: "Mo-o-o-o-o-m, can I have that doll?" "Oh, okay. It's only worth a couple of bucks."

I have weird feelings about these dolls. I honestly do. After watching a number of "Kaylee's Morning Routine" videos, which made me gasp, I began to wonder what it would be like to own a doll so real-looking that cops broke the glass in hot car windows to rescue them. (Doll owners are not above such pranks and love freaking people out while shopping at Walmart, sometimes casually abandoning them in the ladies' room.) I even. . . no, I didn't, but yes, I DID look at some of them, decided they weren't worth my while and that you needed to pay five grand to get a really good one.

Now I wonder what I was thinking of. Getting a cat seemed to rescue me from such thoughts.  I didn't realize I was at such a low point. At least the cat is real.

If you watch their YouTube videos, the collectors cannot understand why anyone would find their obsession creepy. "Full-body silicone" seems to be the Cadillac of these never-born, never-dead things, quickly replacing those clunky old cloth-bodies that can't even be bathed. This rarefied cult strikes me as stereotyped and largely misunderstood. Wikipedia says reborns are owned almost exclusively by elderly women who at some point suffered the loss of a child, but that's simply not true. Nearly all the videos I've seen are of women in their 20s and 30s, and quite a few of them are teenagers.

I can only assume that they just like having them around to feed, dress, bathe and take on "outings", and collect them obsessively. Elaborate, thrill-packed box-opening ceremonies abound on YouTube, each one packed with as much fun and excitement as a baby shower. These are actually entertaining to watch: though the disaster openings ("ohhhhh noooooo, his head is warped. . .") are even more fun.

I keep thinking of a chant we had in school: "Rubber baby-buggy bumpers". You had to say it ten times fast, or something, though I am not sure why.

POSTSCRIPT (there's always one of those!): I found this weird little entry in Wikipedia, which gets just about everything wrong about reborn dolls:


I've scoured the internet and found NO reference to "Bodo dolls", though I did find "Bobo dolls". These are the roly-poly clown things that bounce back up when you push them over. For some reason, all sorts of scientific experiments have been done on these that don't interest me at all. "Unliving" isn't easy to find either, except on really creepy sites that have nothing to do with these dolls.

And then there's this:

The overwhelming majority of reborn customers are older women. Many women collect reborns as they would a non-reborn doll, whilst others purchase them to fill a void of a lost child and may treat reborns as living babies. Media features and public receptions have used such adjectives as "creepy" to describe the reborns. This can be explained by the uncanny valley hypothesis. This states that as objects become more lifelike they gain an increasing empathetic response, until a certain point at which the response changes to repulsion. Department stores have refused to stock the dolls because of this reaction, claiming they are too lifelike.

I don't know if I have seen any "older women" on the YouTube videos, if older means 60s or 70s. Many of them are less than half my age. Wikipedia makes no reference at all to the "full-body silicone" doll which is all the rage now. This information is at least ten years out of date. Wiki is mostly put together by guys in their 20s, the ones that live in Mom's basement and really don't get out much, or do much of anything except steal each other's research.

As for department stores not selling them because they are "too lifelike", it's more likely they don't sell them because of the price factor. Really good ones cost hundreds or even many thousands of dollars. Unless they bolted them to the shelves (hmmmmm. . . ), they could stand to lose a lot through shoplifting. Picture it: reborn kidnappers wearing maternity coats sneaking into the toy department and smuggling the little blighters out past the store alarms.

BTW, I'd be interested to see if there is any feuding between "old-school" cloth-bodied reborners and the newer, full-body-silicone crowd. I have never seen a video of a conventional reborn which could be bent and twisted and slung around like this. Nor do they have realistic genitals, a detail which squicks out even some of the most die-hard collectors. That hunk of quivering pink silicone looks EXACTLY like a real baby, folks, and that is exactly what makes it so creepy. 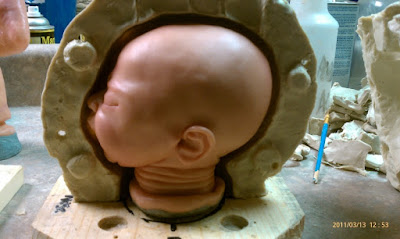 Damn, I thought I was finished! But I just had a horrible thought. These dolls are molded, right? HOW DO THEY MAKE THE MOLDS? The only method I can think of is to make a plaster cast of a baby. How else could they make it that realistic, down to those last minute bumps of scarlet prickly heat? 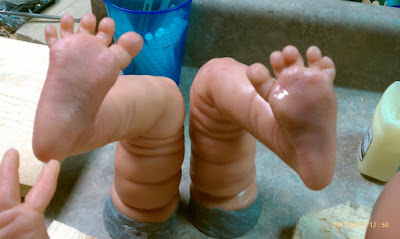 Dear God. This is worse than the squawky, distorted, Night of the Living Dead Edison doll recordings! I found some instructions for making a silicone, baby, but I find them kind of hard to believe. Nevertheless, in the interests of science, I will share them with you:

There is one way to do a full mold for a full silicone baby, and I have been researching this, but haven’t done it yet.

You start off by drawing a line through the center of the baby, around its head, fingers, toes.

Then you take some white clay and put it on the bottom of the mold, and pack it into the center lines all around the baby.

You take a flat brush and dampen it and go around the edges making sure the clay is sealed.

Cut off excess on sides to not be wasteful with product.

Take the end of a sharpie with the lid on it, and make holes around the baby, which will be the center holes that hold the mold together. You can even put the round nuts around it if you want to. 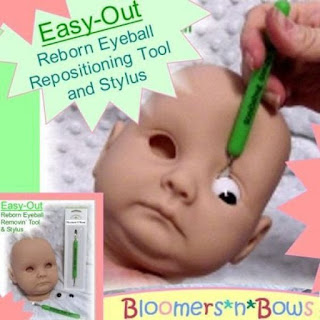 Pour the product into the mold covering the baby half that you can see.

Cut the mold open and remove the clay and any loose silicone that is dangling.

Clean all of the clay off.

Turn the baby over and roll up a clay hole maker to put into the center for the pour hole.

Cover the remainder of the baby.

Remove. It comes apart, but you can pour the baby into the pour hole.

Make sure to Tap tap tap to get all of the air bubbles out, because you don’t want those. It will waste your silicone product. Also turn to cover every nook and cranny.

Posted by Margaret Gunning at 1:26 PM No comments: