Ryan pitches for the first time: a historic gif!

Posted by Margaret Gunning at 9:44 PM No comments:

Things I forget to remember 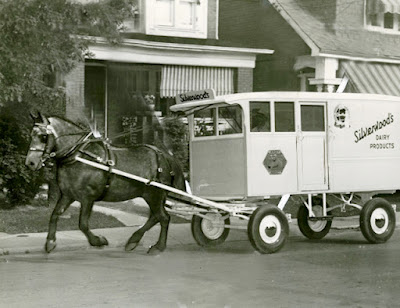 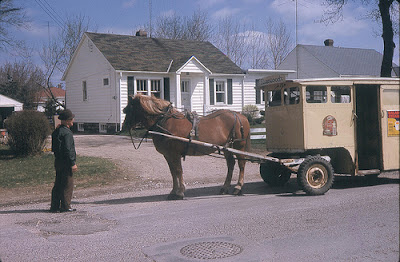 These aren't all from Chatham where I grew up, but these first two are. The point is, I am the last generation on earth to remember milk being delivered by horse and wagon. I loved this as a child. Anything to do with horses was magical. That cloppa-cloppa-cloppa sound is still intoxicating to me. 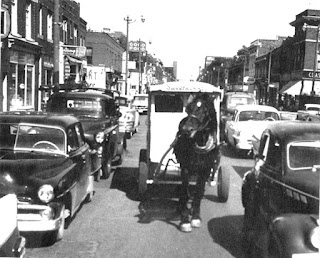 It's hard to find photos of the era - some of these no doubt go back before my time. It's even harder to find any information at all about the actual practice of delivering milk door-to-door. There's just nothing there, no one who remembers anything. All of them have died, I guess. 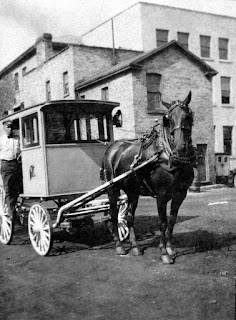 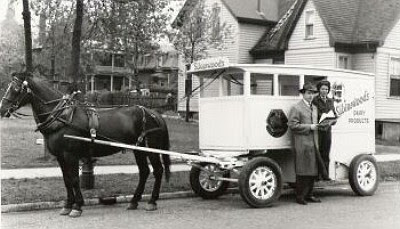 This was anti-technology, and Silverwood's Dairy (horse and cart pictured above) in Ontario kept it going until about 1962. I don't know why: did it keep costs down? Eventually it became impractical to keep all those horses, and I would imagine most of them went to the slaughterhouse: Darling's glue factory, where the stench from rendered hoofs and hides was simply sickening in those hot Chatham summers.

With the cicadas buzzing. 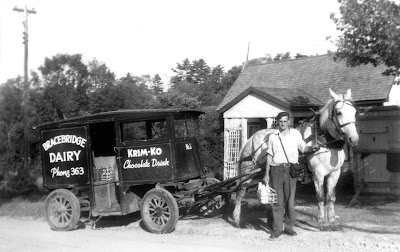 Every so often I go on Chatham historical sites - there are tons of them, Chatham people being preservation-minded and not inclined to rip down old buildings to slap up cardboard condos that go up instead of out. Last night I found a site listing old houses that looked very ordinary to me, but went back to 1850 or so. It honestly made me wonder, not for the first time, how old the house I grew up in was: some say 1920s, but it looked older to me than many of the 1850 ones. It had wrought-iron grates on the heat registers, a dumbwaiter, a weird closet-within-a-closet thing, a working fireplace with a terrazzo hearth (very rare then), a foyer, and ceramic fruit on the ceiling around the base of the old-fashioned glass chandelier. 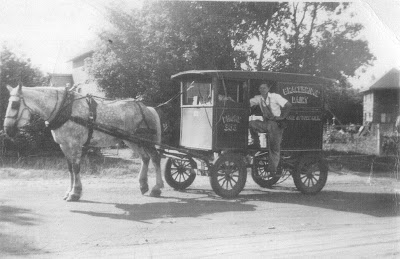 I know people are living there again, because I got an email from one of them, which is nice because for about forty years it was used as a commercial building, a doctor's office. Now it has been changed back to a house again. A home, with a young couple and children. It has been a long, long time since small children (such as me) ran around in that place. 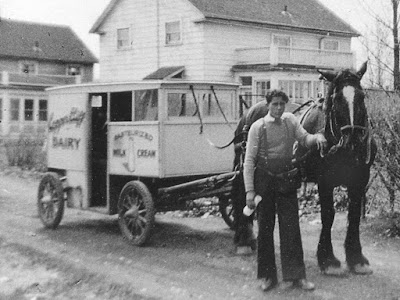 Anyway, in my late-night historical foraging, I found the house I used to play in with my friend Kim, whose father was a very distinguished, even world-renowned architect (which, by the way, Kim now is too). Who knew?  The houses he designed looked strange to us, with flat roofs and only one floor. Now they are known as "Storey houses" and much-prized.

I also found the little variety store where I bought penny candy, now up for sale. They even showed the inside of it. Once I played with a little girl who lived up there with her mother and went to (I remember) Pentecostal Holiness Church. She asked me if I'd like to go to her church, and when I told my mother she was shocked that she even asked. I think now that she was afraid my friend might be black.

What's the point of all this? Nothing, except that it's gone forever, those days of organic things like wood and horseflesh. Brick has lasted a little bit longer.

And memory lasts, too. That is, until you die.

Posted by Margaret Gunning at 12:47 PM No comments:

Before Kellogg's even thought about "plump and juicy" and frosting their unpalatable wrinkled black fruit with sugar, Post had this adorable couple, Maisie and Jake: literally, an animated raisin (presumably plump and juicy) and an animated bran flake. There was a series of ads in the Maisie and Jake mode, but we won't get into that now because these adventures (not featuring Maisie and Jake but bank robberies and such) took a minute and a half, an eternity for people used to seeing ten-second spots. I've extracted only the best parts in these gifs, in which M & J introduce the stories, then give a sort of threefold amen at the end.

The first two gifs look identical, but they're not. In this one, she shows a bit of leg that I couldn't capture with the first one. I like to see attractive, even seductive raisins, don't you? And Maisie rocks it, even with that frilly thing on her head.

I have limitations on my gifs now. Hell, I always have! When I finally find a site I can use and which turns out a good result, it disappears (Gifsforum) or just stops working (Makeagif, now making jerky, useless things). It took four or five years for me to figure out how to make them at all, and now my problem is, they won't RUN if I post too many of them. The most beautiful ones come from my own videos (see Sandhill Cranes at Piper Spit), but these are barely running at all now.  They're just frozen and sort of jerky. I don't know if this applies to everyone who looks at my posts, or just me. My blog is gif-heavy because I can extract a few seconds of arresting (I hope!)  visual imagery out of a long, dull-ish video.

I extracted these treasures from a YouTube series posted by MattThe Saiyan, whose vintage ad compilations I look forward to each day. Yes, he posts a new one EVERY DAY, which is very gratifying for me. I'm used to finding fantastic ad videos dated 2011 or 2012, and the person who made them has probably died by now. Matt hasn't.

I won't get into the absurdity of "plump, juicy" raisins when they are a wrinkled, dessicated, blackish remnant of a fruit. But Maisie comes pretty close. Her head looks more like a fat prune to me, but you'd have to ask Jake. He'd be the only one who knows.

Posted by Margaret Gunning at 12:14 PM No comments:

I miss you, George

I miss you so, George! And even though I know there is nothing I can do to bring you back, even though I know that lightning never strikes twice and I lost you before I even knew I had you, even though forces have conspired to keep us apart that I never could have dreamed of, even though you have been denied and I have been denied by a power of negativity that is now mysteriously obliterated - even in the midst of all this madness and confusion, I miss you, I will love you always, and look forward to that blessed day when you will cross barriers of time and space and walk through walls to be with me again.