Beautiful Railway Bridge of the Silv’ry Tay!
Alas! I am very sorry to say
That ninety lives have been taken away
On the last Sabbath day of 1879,
Which will be remember’d for a very long time. 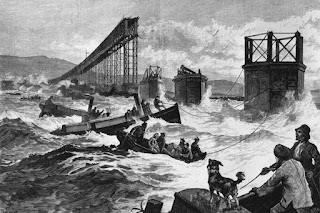 When the train left Edinburgh
The passengers’ hearts were light and felt no sorrow,
But Boreas blew a terrific gale,
Which made their hearts for to quail,
And many of the passengers with fear did say-
“I hope God will send us safe across the Bridge of Tay.”

But when the train came near to Wormit Bay,
Boreas he did loud and angry bray,
And shook the central girders of the Bridge of Tay
On the last Sabbath day of 1879,
Which will be remember’d for a very long time. 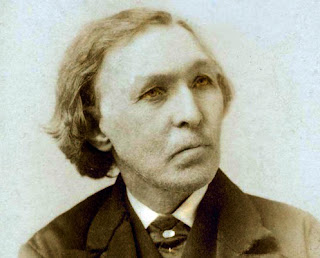 So the train sped on with all its might,
And Bonnie Dundee soon hove in sight,
And the passengers’ hearts felt light,
Thinking they would enjoy themselves on the New Year,
With their friends at home they lov’d most dear,
And wish them all a happy New Year.

So the train mov’d slowly along the Bridge of Tay,
Until it was about midway,
Then the central girders with a crash gave way,
And down went the train and passengers into the Tay!
The Storm Fiend did loudly bray,
Because ninety lives had been taken away,
On the last Sabbath day of 1879,
Which will be remember’d for a very long time. 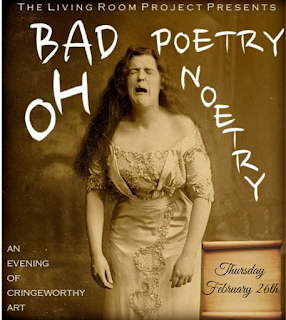 As soon as the catastrophe came to be known
The alarm from mouth to mouth was blown,
And the cry rang out all o’er the town,
Good Heavens! the Tay Bridge is blown down,
And a passenger train from Edinburgh,
Which fill’d all the peoples hearts with sorrow,
And made them for to turn pale,
Because none of the passengers were sav’d to tell the tale
How the disaster happen’d on the last Sabbath day of 1879,
Which will be remember’d for a very long time. 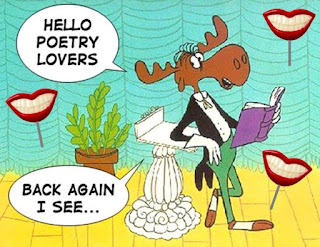 It must have been an awful sight,
To witness in the dusky moonlight,
While the Storm Fiend did laugh, and angry did bray,
Along the Railway Bridge of the Silv’ry Tay,
Oh! ill-fated Bridge of the Silv’ry Tay,
I must now conclude my lay
By telling the world fearlessly without the least dismay,
That your central girders would not have given way,
At least many sensible men do say,
Had they been supported on each side with buttresses,
At least many sensible men confesses,
For the stronger we our houses do build,
The less chance we have of being killed.

William Topaz McGonagall (March 1825 – 29 September 1902) was a Scottish weaver, doggerel poet and actor. He won notoriety as an extremely bad poet who exhibited no recognition of, or concern for, his peers' opinions of his work.

He wrote about 200 poems, including his notorious "The Tay Bridge Disaster" and "The Famous Tay Whale", which are widely regarded as some of the worst in English literature. Groups throughout Scotland engaged him to make recitations from his work and contemporary descriptions of these performances indicate that many listeners were appreciating McGonagall's skill as a comic music hall character. Collections of his verse remain popular, with several volumes available today.


McGonagall has been acclaimed as the worst poet in British history. The chief criticisms are that he is deaf to poetic metaphor and unable to scan correctly. McGonagall's fame stems from the humorous effects these shortcomings generate in his work. The inappropriate rhythms, weak vocabulary, and ill-advised imagery combine to make his work amongst the most unintentionally amusing dramatic poetry in the English language. His work is in a long tradition of narrative ballads and verse written and published about great events and tragedies, and widely circulated among the local population as handbills. In an age before radio and television, their voice was one way of communicating important news to an avid public. (Wikipedia)

Please note. I have absolutely nothing to say about this McGonagall. Like the excruciating soprano Florence Foster Jenkins, he was good at being bad, and people liked it. I love bad poetry, but I was unable to find anything at all that pleased me tonight. It was either gross and full of fucks and sucks, which I didn't want, or trying too hard to be either good or bad. The truly bad has that effortless quality which we associate with greatness.

I did a post ages ago, Valentine poems that were sublimely bad. But it's hard to find stuff on just that right frequency where you want to howl with bliss.

A lot of the stuff featured on bad poetry web sites is just too good. Bad poems by the great poets have to be just a LITTLE bit good, because these are, after all, real poets. An awful lot of it is just boring, and if bad poetry equals boring poetry, there is entirely too much of it around.

I remember the dialect poetry I got so stuck on a few years ago, but it too can wear out its welcome or even verge on the racist. The Sonnet on Stewed Prunes by William F. Kirk comes to mind:

These poems are meant not to be read, but performed, in the fine old tradition of poets getting up and giving long windbag recitals of their work. Being an elocutionist was actually a profession then, something you made money at. McGonagall got up and performed, and so did Kirk, and that other guy, what was his name -

You bad leetle boy, not moche you care
How busy you 're kipin' your poor gran'pere
Tryin' to stop you ev'ry day
Chasin' de hen aroun' de hay--
W'y don't you geev' dem a chance to lay?
Leetle Bateese!

Off on de fiel' you foller de plough
Den w'en you 're tire you scare the cow
Sickin' de dog till dey jomp the wall
So de milk ain't good for not'ing at all--
An' you 're only five an' a half dis fall,
Leetle Bateese!

Too sleepy for sayin' de prayer to-night?
Never min' I s'pose it 'll be all right
Say dem to-morrow--ah! dere he go!
Fas' asleep in a minute or so--
An' he 'll stay lak dat till de rooster crow,
Leetle Bateese!

William Henry Drummond, whom we "took" in school ad nauseam, the teacher actually reading these poems aloud to us in "French" dialect. 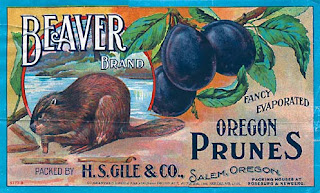 There's always a postscript, isn't there? A couple of years ago when I wanted to find something on Drummond, there was barely anything. I couldn't even scrape together a list of his works.  Now there are entire sites of nothing but his poetry - his awful poetry - all that wretched stuff we choked down in school about "de stove-pipe hole" and all that appalling shit. Not only that - there are now dozens of YouTube videos of people reciting Drummond's awful awful poetry! I won't blight this already-too-long post with any of THAT. But it makes me realize the internet just keeps growing like a malignant fungus. And there must be an awful lot of older people like me interested in setting up poetry web sites, because surely no one under the age of 60 would be able to gag down a monstrosity  like "Leetle Bateese".

Posted by Margaret Gunning at 10:44 PM No comments:

One dead possum: will trade for chocolate

Dead opossums, and other strange things you could be swapping on Bunz Trading Zone

Bunz Trading Zone, an unlisted Facebook group where users can barter their stuff for anything except money, has become Toronto’s worst-kept secret. With over 30,000 users on Facebook and a claimed 12,000 on the new Bunz iOS app, the group generates dozens of new postings every day, most of which are attempts to swap mundane items like kitchen appliances and used clothing. Still, more eccentric trades are commonplace, with people exchanging opened packages of birth control pills, half-eaten foodstuffs and even dead animal carcasses. It’s currently impossible to join the group without administrator approval, so here, for those on the outside, are some highlights from the past few weeks, some of them potentially NSFW:

The ask: “Naturally deceased small mammals for taxidermy.”
The trade: This post didn’t lead directly to a trade. But later that same day…

The offer: One opossum, dead of presumably natural causes.
The trade: The yoga instructor and amateur taxidermist who made the post seeking dead mammals snapped up this unlucky critter in exchange for a chocolate bar. 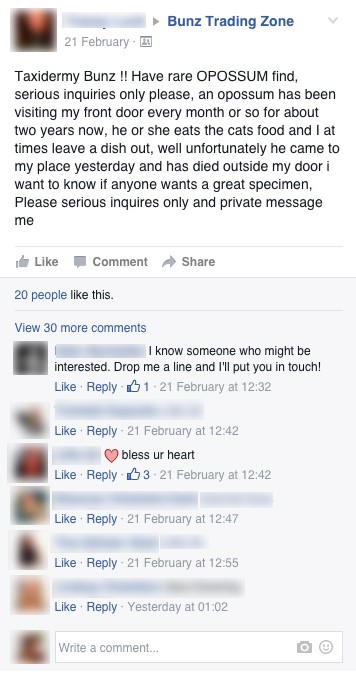 The ask: A popular handheld video game system, which retails for around $200.
The trade: In exchange for the 3DS, this Bunz user agreed to deliver coffee to someone at their office for a month. 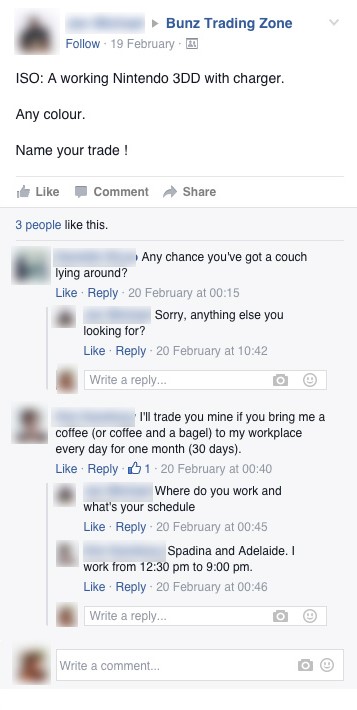 The offer: An opened package of prescription contraceptives.
The trade: The user accepted three subway tokens. 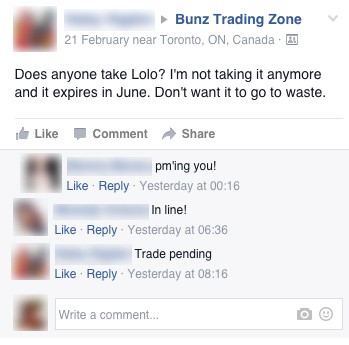 The offer: A complete stranger’s leftover pizza.
The trade: Someone exchanged a tall can of beer for this.

The offer: An actual, 30-foot sailboat. The owner says he lived on it for two summers.
The trade: None yet, but there have been a number of offers, including a Jeep Grand Cherokee, a trip to Australia, and free movie-production services.

The offer: Five disembodied mannequin heads.
The trade: The user couldn’t find anyone willing to take all of the heads, but someone gave her four tall cans of beer for one of them. 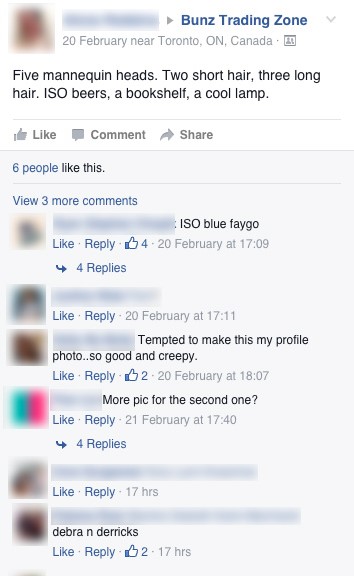 The ask: When a Montreal-based designer forgot to give keys to her catsitter before she took off for Toronto, she decided to canvass Bunz for a lead on someone travelling in the opposite direction.
The trade: Bunz itself didn’t lead to a solution, in this case, but the user was able to find someone through another online group, who delivered the key in exchange for a used Montreal monthly transit pass.

The offer: More than 60 cassettes, each crammed with hours of low-def smut.
The trade: None yet, but the user is in negotiations for a Bluetooth speaker. 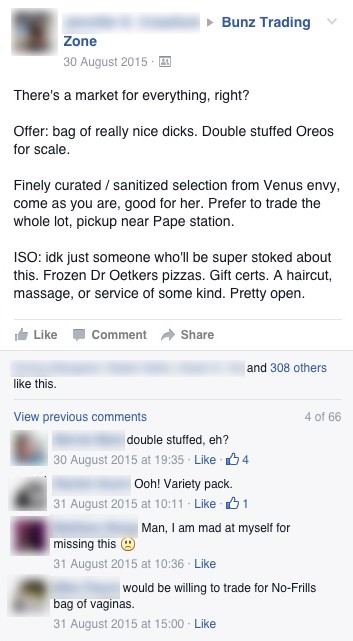