From a REAL dating site: me n' George, together at last?


Posted by Margaret Gunning at 1:59 PM No comments:

This is one of those nice GG videos that features photos and even snippets of film from his life. Rare enough, but what happened last night? What happened when I was so unprepared for the second song (Love Walked In) on this video?

What happened is, I felt astonishment, and I cried. Cried because, stripped of all the schmaltz, we have a version so close to what George would play that it's almost scary. He was not a sentimental pianist and played with tremendous energy and verve. The love songs shone and gleamed, shot through with sunlight. He was solar rather than lunar, though that sunnyness  was sometimes sadly, darkly eclipsed.

I heard Debussy in those newly-revealed, stripped-down chords, but I heard something absolutely original too. I don't know of any other composer who can knock me back with a single chord. It's remarkable.

So we have the two sides of George here, almost aggressive honky-tonk (and believe me, in the few recordings we have of him, he played fast and he played hard) and sheer, naked poetry. Jack Gibbons has tried to peel back all the layers of sentimentality and get back to essential Gershwin, and it's like restoring a gorgeous Renaissance painting that has been dulled by a thousand layers of varnish and time. What is revealed is startling, so fresh the paint is still wet.

The song begins at 3:01. It's one of those songs that is so simple, it's hardly there. As Salieri says in Amadeus, remove even one element, one note and the whole structure would fall down. And yet it is something that will last forever. 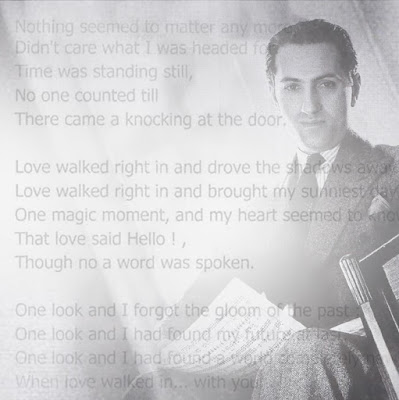 Nothing seemed to matter any more,
Didn't care what I was headed for
Time was standing still,
No one counted till
There came a knocking at the door.


And here is the best vocal version I've heard, sung sweetly and sincerely with a simple, clean, unsentimental orchestration and a fantastic segue into "swing" near the end (the last dreamy note reminding me of an Astaire and Rogers film). I DON'T KNOW WHO THIS IS! But I think that Gershwin, who always referred to himself as a Russian, would have appreciated this.

Posted by Margaret Gunning at 10:55 AM No comments:

Posted by Margaret Gunning at 10:04 AM No comments: 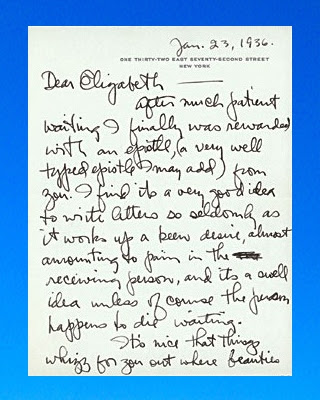 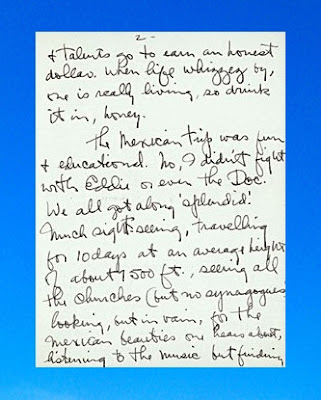 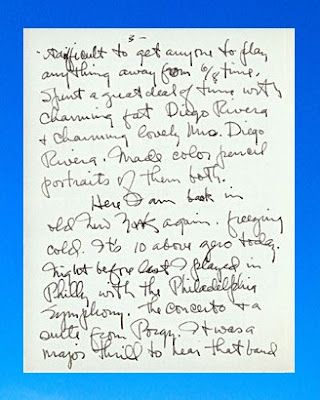 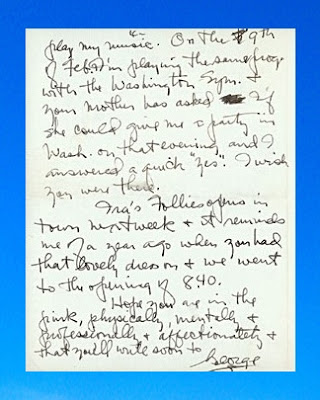 Can I say something about George's hand? How can you stop me? It's my blog, and I'll go on about it if I want to. I have no special skills in analyzing handwriting, but I do pick up vibes from it, some of them distressingly negative. But I love this guy's handwriting, it's the writing of someone I'd like to meet. There is an optimism and freshness and energy about it, but at the same time, a diligence, even a neatness and precision interspersed with a few artistic flourishes in the capitols. It seems to surge forward bravely and even eagerly, and chimes in a way that's quite palpable even after all these years. It's friendly stuff. Does it reflect any of his complicated, paradoxical nature? No. It doesn't. Maybe biographers have pushed that pedal a little too hard over the years. A genius doesn't have to strain and labour to be a genius. In my long and tumultuous exploration of Gershwiniana (too many syllables, there), I've compared him again and again to Mozart, so lavishly, naturally gifted that it seemed almost supernatural. GG did not come from a music family - at all. They were tradesmen and furriers and even bookies and borderline crooks. He was, as they used to say, "a hop out of kin". But his hand is refreshingly normal, eager, with a kind of upward sweep and a let's-get-going that does seem to be reflective of his biographical self. Which makes his death that much more horrible. Come right in, George, I want to talk to you.