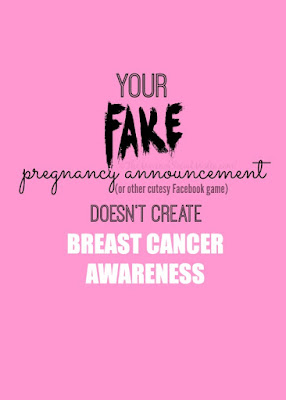 I recently saw, from someone who has been a Facebook/actual friend for a very long time, a sudden, dramatic announcement on her status update: WE'RE MOVING TO VERMONT AT THE END OF THE YEAR! This was followed by a ton of comments from her friends: "Oh no!" "Why didn't you tell me?" "I thought you said you'd never leave (your hometown)!", etc. etc.

Then I got a message from her that made no sense at all:


1. Just found a squirrel in my car!
2. Just used my kids to get out of a speeding ticket.
3. How do you get rid of foot fungus?
4. All of my bras are missing!
5. I think I just accepted a marriage proposal online?!
6. I've decided to stop wearing underwear.
7. It's confirmed I'm going to be a mommy/daddy.
8. Just won a chance audition on America's got talent!
9. I've been accepted on master chef.
10. I'm getting a pet monkey!
11. I just peed myself!
12. Really thinking about getting butt implants!
13. Just won 700 on a scratcher!
14. We're moving to Vermont at the end of the year!
15. Mayonnaise on Reese's peanut butter cups is sooo good!

Post with no explanations. Sorry, I fell for it too.

Looking forward to your post. Ahhh don't ruin it. (Don't let the secret out). And remember it's all for the 2016 Breast Cancer Awareness." Go Pink!! 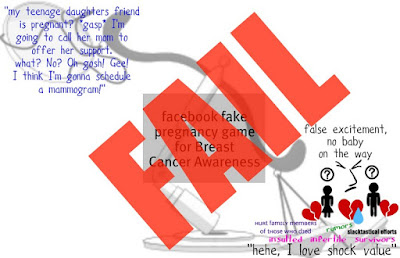 This was an invitation to play a kind of Facebook tag, the kind I never participate in anyway. I'm offended by all these kinds of things, but this one. . . The fact that it was somehow (?) connected to breast cancer awareness particularly offended me. It felt as if something incredibly serious was being trivialized. I was given no choice but to be a good sport and go along with it, when it wasn't funny or constructive at all. When I checked this on Snopes, it turned out this sort of thing has been going on for years and years, with variations in the nature of the status posts. The worst of them involved women claiming to be pregnant ("Surprise!"). Not surprisingly, none of this has anything whatsoever to do with breast cancer funding or research, or even (as far as I am concerned) "awareness". 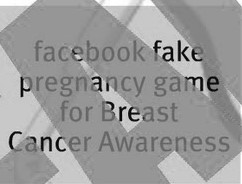 There is a sense that if people are aware of something, it's always a good thing that can only lead to MORE good things. Oh yes? The Kardashians? Donald Trump? Awareness on its own means nothing, and can lead to the kind of endless, pointless blather that is currently choking the internet.

I messaged my friend back and pointed out that this was a hoax, which she denied: she said she had researched it (in other words, she was right about it and I was wrong). Furthermore, she had a friend with breast cancer who loved it, supposedly making it not only OK but (?) desirable and effective, though no donation button existed anywhere. Then she prescribed (presumably, for my bitterness and anger in NOT playing the game)  a favorite self-help book of hers called Loving What Is.  Self-help/acceptance for someone who obviously needed it. The message seemed to be: if I didn't go along with her cancer boondoggle, I must have something wrong with my emotional health. 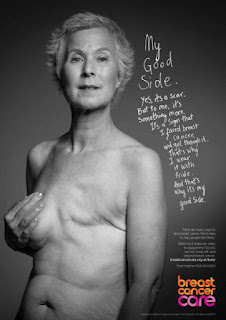 I cannot really describe the welter of feelings I have right now. I feel condescended to, and jerked around. It just isn't funny, but if I don't play along with it I am a "spoilsport" and don't care about all those suffering women. I wonder if any of her other (baffled?) Facebook friends are having the same reaction, but it may well be the usual Greek chorus thing: "ohhhhh, you fooled me there!" "Oh, I'm so glad you're not moving to Vermont."

The following is an excerpt from a powerful 2013 blog post by cancer warrior Lisa Bonchek Adams.
http://lisabadams.com/2013/10/04/breast-cancer-still-facebook-game/

I will not say she "lost her battle" in 2015, as everyone seems to phrase it. Rather, she lived with her disease as fully and openly as is humanly possible, and wrote magnificently while doing so. I quote her here because nobody has ever said it with more eloquence:

"Once again Facebook games about breast cancer are making the rounds now that it is October. I posted this last year and got some flack from people who thought anything that 'raised awareness' about breast cancer was good and couldn’t understand why I am critical of these messages. 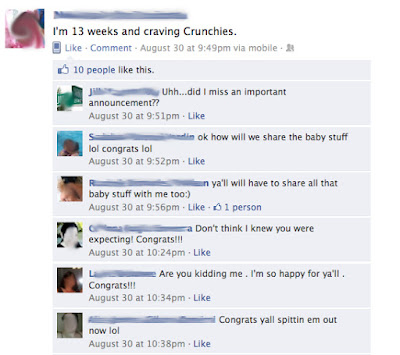 My point is that this isn’t awareness.

There probably isn’t anyone on Facebook who doesn’t know that breast cancer exists. But there certainly is a lot of myth-busting to be done. This is not how to do it. . . There’s a lot of work to be done educating. Education is awareness, these Facebook posts are not.

(There follows a version of the above list of options)

The above instructions are not awareness. This is offensive. Breast cancer is not a joke, awareness does not come from sharing the color of your underwear or your marital status (the whole “tee-hee, wink-wink” attitude adds to my disgust). Even if it ended up on TV, that still would not be educating people about breast cancer they didn’t know before. All it does is show the world that lots of people are willing to post silly things as their status updates. 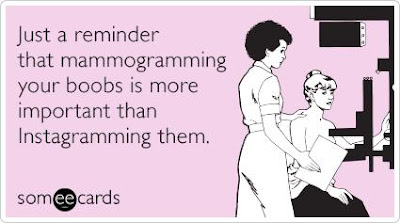 Just because it says it’s about breast cancer awareness doesn’t mean you have to agree. Go ahead. Ignore it. Or write back and tell them why you don’t want to be included in these things anymore. Another blogger, Susan Niebur, wrote about her take here. She was an astrophysicist, by the way. She died of metastatic breast cancer.

Anyone who has breast cancer and uses your FB status update as an indicator of whether you support their cause is not very enlightened. When I rank 'how to help those of us with cancer,' sharing one of these paragraphs as a status update is the lowest possible method of showing support. There are endless ways to do that. I think it actually is the opposite; sharing these status updates makes people feel they are doing something real for breast cancer causes when they aren’t. (emphasis mine)

I say: count me out of these Facebook games.

I have stage 4 breast cancer and it is no game to me."

LOL, YOU SHOULD NOT HAVE LIKED OR COMMENTED!!!! NOW YOU HAVE TO PICK ONE FROM THESE BELOW AND POST IT TO YOUR STATUS. THIS IS THE 2014 BREAST CANCER AWARENESS GAME. DON’T BE A SPOILSPORT, PICK YOUR POISON FROM ONE OF THESE AND CHANGE YOUR STATUS, 1) DAMN DIARRHOEA 2) JUST USED MY BOOBS TO GET OUT OF A SPEEDING TICKET 3) ANYONE HAVE A TAMPON, I’M OUT 4) HOW DO YOU GET RID OF FOOT FUNGUS? 5) WHY IS NOBODY AROUND WHEN I’M HORNY? 6) NO TOILET PAPER, GOODBYE SOCKS. 7) SOMEONE HAS OFFERED ME A JOB AS A PROSTITUTE BUT I’M HESITANT. 8) I THINK I’M IN LOVE WITH SOMEONE, WHAT SHOULD I DO? 9) I’VE DECIDED TO STOP WEARING UNDERWEAR. 10) IT’S CONFIRMED, I’M GOING TO BE A MUMMY/DADDY! 11) JUST WON £900 ON A SCRATCH CARD 12) I’VE JUST FOUND OUT I’VE BEEN CHEATED ON FOR THE LAST 5 MONTHS. POST WITH NO EXPLANATIONS. SO SORRY I FELL FOR IT TOO!!!!! LOOKING FORWARD TO YOUR POST HA HA. 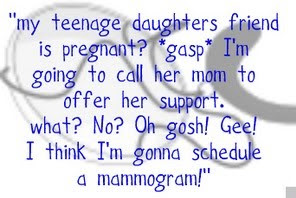 I realize I take the risk of my friend seeing this and being offended. But if we are real friends, there will be a conversation about it, not just "here, read this self-help book, you obviously need it". I have no idea if she will get anything but positive feedback from her other friends on her baffling, confusing post, and I suppose it's none of my business.

People have pointed out that the "ice-bucket challenge" of a few years ago was gimmicky, too - but I seem to remember it was tied to actual donations of money. I am not "against" all awareness projects, nor am I "against" cancer research. I am not grim and humourless, nor do I believe that breast cancer can never be approached in a light-hearted way.

But there is a difference between light-hearted and goddamn stupid.

Social media, so promising at the beginning, has become a cheap and silly game, and I often wonder why I stay with it. I only opened a Facebook account because I had a book coming out and my publisher required me to do so. Especially during the American election, I've seen comments that made my hair stand on end from people I thought I knew. 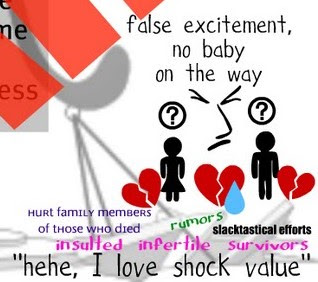 It saddens me to say I had to unfollow my friend, and I may have to do more than that because my insides feel like a milkshake. Social media would say, "Don't feel that way" or "ignore it", the good old turn-off-your-feelings advice that has the world on the brink of total meltdown. Or, I guess, embrace acceptance as a way of life and never be angry again.

It's hard to unfriend someone I've known for 30 years. But I don't want to feel this way because of something she sent me. It's my life, and I can feel what I want to - and I will.

Posted by Margaret Gunning at 4:49 PM