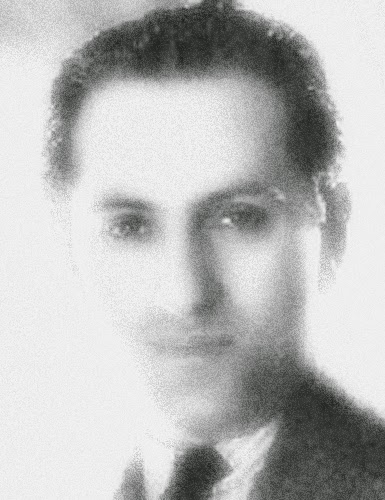 Gershwin is a time traveller - you can see him out of the corner of your eye. He did not die in the normal sense of the word, because he did not know where he was. He was in a very high fever and dying all alone in a hospital room after failed brain surgery. When he left his body, he experienced extreme disorientation and for quite a while did not realize he was dead. This meant that a light, loose Gershwin-shaped energy field still moved about the world, and lit up whenever his music was played (which was almost all the time). After a very long time, though it was a mere moment in eternity, he began to realize who and how he actually was, that he was no longer in a body and would have to exist in a very different form. Being a soul sojourner from the beginning, this was not a threat but an adventure to him. But even in spite of this necessary metamorphosis, to a remarkable degree, he retained a George Gershwin shape. No matter what sort of problems he was having in his life, and he had many that we don't know anything about, there was a ferocious static-charged supernatural pumped boost of energy that somehow kept on connecting people with each other when he was around. But ironically, in spite of his sacred mission to join people joyously,in his life he had many struggles with intimacy, which led to a loneliness even as he was the most popular man in the room. During this strange leaving-his-body-and-not-being-sure-where-he-was period, he began to have extraordinary insight into not just his own condition, but the human condition. 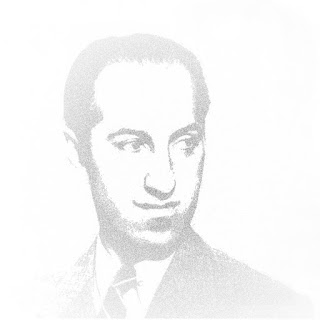 GG's emotional affect and his emotions seemed curiously light, but there was a galaxy of melancholy within that he did not show to too many people. The stars in that galaxy exploded out of his fingers and his brain and were made manifest as notes of music on the page. Though he lived at a hurtling pace few people could equal, little did he know that he was absorbing all of humanity's travails, gaining an understanding of suffering that would not be fully realized until he found himself in a different form outside his body. It would have been unbearably painful, had his life (as he knew it) not been over, a blessed cessation of all earthly pain. When a soul or entity gains this sort of awareness, mysterious alchemy takes place because the need here on earth for that level of understanding is so dire. Those pained and anguished places in that broken thing we call the human condition began to draw and attract this generous, gentle, deeply broken spirit. There was Gershwin dust in the room sifting down like stardust, particularly when there was music playing. And there was music playing a lot.

Someone, not keeping up their guard, felt something strange or warm and not quite familiar in the room, yet also hauntingly familiar. Someone else thought they saw him for a second, or someone that looked like him. There was in some subconscious way a powerful sense that a healing was beginning to happen. As the entity begins to heal, so it heals itself. George's brain gave way, the most disturbing way to die, so that he was basically humbled by losing the genius brain he was celebrated for. Stripped of that, even of that, all that was left was his essence. How can I say how this happens? How can I be sure that George Gershwin is a time traveller and an entity who is basically free to move about within time and space wherever and whenever he wishes?


BLOGGER'S NOTE. Since writing this, one of the first passages I ever wrote about Gershwin and my sense of close contact with him, I found a number of other writings that made my scalp prickle. It does make me wonder: does he have the capacity to move back and forth between worlds, or has he decided to stay in this one, wandering around as curiously and restlessly as he did in life?

My wonderful George experience was completely derailed when everything I wrote was shot down by a so-called friend, a spiritualist medium who has decided to set up his own little fiefdom and call himself God. To be honest, it came out he never actually read any of the things I sent him, but was still certain that it was all bogus. This was also true when he dismissed my first complete novel as "a zany soap opera" (having never read THAT either). Later, when he half-assedly apologized, he said I had "triggered his issues", meaning "you made me do it."

To my chagrin, the entire thing dropped out from under me and disappeared, and I felt considerable grief. I had to keep moving forward and practically stopped thinking about it. He had triggered embarrassment in me, which I guess was what he wanted. But I had trusted him, and now I didn't know why I took that risk.

Then the other day, someone or something entered my office - just came in, I mean. Didn't so much waft or float or materialize like the ghost of Jacob Marley. He just walked in, like Love in that song. He walked in on my left side and came around so I was facing him and I saw that sweet, familiar look and that indescribable vibe.

Below are a couple of quotes from the many (many, many) books on George. It seems he does appear to people, including his own sad, bereaved brother/writing partner, Ira. It's too bad he could not have enjoyed the visit more, sad that he was so terrified at George's friendly, unspectral return.  I feel George as the most gorgeous, the most glorious presence, but at the same time soft, tender - really, quite indescribable, the most beautiful of vibes stealing into the room. 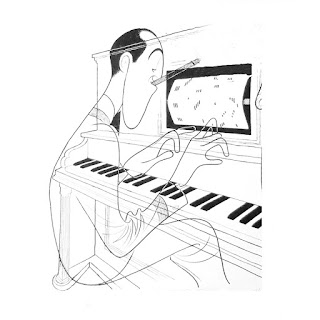 "As Ira grew older, he became not less but more obsessed with George. When he was in his eighties, Michael Feinstein, who had become something of a surrogate son to him, heard him talking to George in his sleep. These were, according to Feinstein, 'lengthy conversations' that were 'often filled with anger, centering around Ira's desire not to stay here on earth and George's insistence that he stay.' Just before Ira's death in 1983, he revealed to Feinstein in a hushed voice something he had never told anyone else. Shortly after George's passing, he had looked into his brother's workroom upstairs at 1019 North Roxbury and seen him 'sitting on the sofa, smiling and nodding to me. It terrified me. I wasn't drinking. I wasn't drunk. But I saw him.'"

Posted by Margaret Gunning at 3:58 PM No comments: