The best thing I have ever seen about gun violence 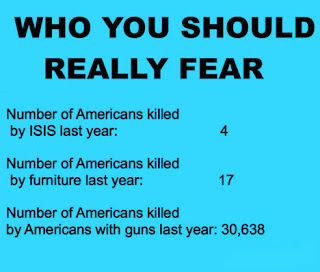 Zonk Deck:  Might have to change this meme, eh?

Matt Bille:  I agree with tighter nationwide regulations, but so many guns are in circulation that I don't know about the impact. I don't fear the guns so much as the people who use them.

Dawn Kresan: Cars are needed, guns are not.

Thomas Behnke: That's why you have to pass two tests to get a license to drive one, you have to register the vehicle, and have liability insurance, you can only drive a certain speed in certain places, and car manufacturers are REQUIRED to include features that are designed to ensure public safety, like seat belts, and mirrors, and there are certain features that are not legal on public roads, unlike guns that have none of these restrictions, even though a car is a tool whose primary purpose is to transport people and things faster and more efficiently than horses, where a gun is a tool whose primary purpose is to kill things faster and more efficiently than a cross bow. Because America and logic have never been the best of friends. 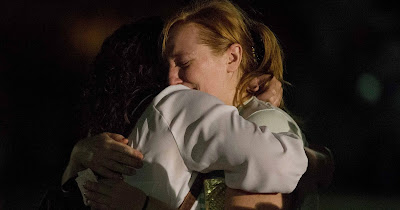 Blogger's Response. This, whether it's strictly allowed or not, is a transcript of a bit of dialogue on my Facebook page about gun violence. While I have a very hard time believing that Isis killed only four Americans in a year, and while I assume the rest of the statistics are pulled out of someone's ass for sake of a dramatic internet meme, it's nevertheless making a good point. But that last comment is something we need to think about. The flip remark "Actually fear cars, cars killed more Americans than guns. Let's ban cars. . . " is dismissive and even mocking, and either supports gun culture or is downright contemptuous of any attempt to condemn it. The next couple of comments put it all into perspective.

Posted by Margaret Gunning at 11:54 AM No comments:

Strangest sex movie I ever saw

This has got to be the strangest erotic film I've ever seen. Mainly because the imagery in it is never quite explained. And yet, and yet. It's oddly compelling, in the way all of Muybridge's stuff is. When I did that experiment of physically cutting apart his multiple time-lapse images and giffing them so that they showed in rapid succession, I found I had made a little "movie". The disjointedness of this is both jarring and mysterious, like a peep show. We're only allowed a frame or two a second, and the rest has to be imagined. Because this brought it to mind, I was going to include the famous Monty Python sex montage with Richard Nixon, and I might yet do it IFFFF my Makeagif program decides to start working again. And oh, please, don't get me started on the demise of Gifsforum, which has not been explained anywhere on the internet: it just disappeared one day and can't be tracked down, not even a complaint on a message board or on Facebook or anywhere. The golden age of making gifs, the Age of Miracles written about in that song, has passed. No longer can I turn colour into black and white in a strange reversal of the Wizard of Oz; no longer can I make them go backwards or reverse halfway; no longer can I use multiple filters for artistic effects, three speeds, make them talk, whistle, dance. It is over. I am left only with a site that doesn't work very reliably. Gifs are considered trivial anyway, but to me they are bloody magic and I will never stop making them until my hands fall off.

Yes. This is what that Giphy system looks like. Not too impressive. but you get the idea.