George was one of the few who busted the code.

Who realized we shouldn't be limited by something as foolish as Time.

And thus, he became a Time Traveller.

Music is temporal, not spatial.

It takes up time, not space.

Though it never runs backwards, it runs in many directions

and has many dimensions

that we cannot hear.

Bust it through a prism

and you'll have overtones

that I guarantee will spook you out

as the tones from which they came.

even bending as time should never bend

and in its scary iridescence

we meet ourselves again and again

Posted by Margaret Gunning at 9:52 PM No comments:

It has been happening just around the edges of my mind. A snatch of tune here and there: ". . . a foggy day in London town," or just a bit of the Rhapsody.

I didn't want to say this until now, still quake a bit when I say it. Some months ago, I went on a Gershwin journey and went as deep into his life as I could.

It was fascinating, the things I found out. I even found recordings of his voice, the level, cultured/Brooklyn sonority of it, perhaps consciously cultivated, but now made his own. And I heard him rehearsing Porgy and Bess with a mixture of feverish excitement and anxiety.

George was/IS one whose ties to the earth haven't been broken. The veil between his reality and ours is an exceptionally thin one, more like a fog. He has slipped back and forth a lot. Not only did his brother Ira see him after his death, so did a lot of other people. I kept finding - eerily - stories of "sightings", even decades later, George walking down the street in that rapidly purposeful way, smiling and waving, even sitting at a player piano with eternally youthful playfulness.

I came to be close to George, or maybe WITH George, which is another thing entirely. The material I wrote down was so intriguing that I sent portions of it to a friend who calls himself a medium. I've known him for 25 years and have had my innings with him, such as when he dismissed my first novel as a "zany soap opera" without reading a word of it. When he abjectly apologized years later, saying I had triggered all his "issues", I forgave him, not realizing it was a clear case of "look what you made me do".

What happened was, oh my, Margaret. This is definitely an authentic connection. This is fascinating! And on and on and on. So I kept on sending it to him, but now I doubt if he even read it. (If he could ignore a whole novel and still dismiss it. . . ). Then at a certain point, and abruptly, "I don't know, I can't make any sense of this but it's definitely nothing to do with Gershwin. Either someone else is pretending here, or you are." 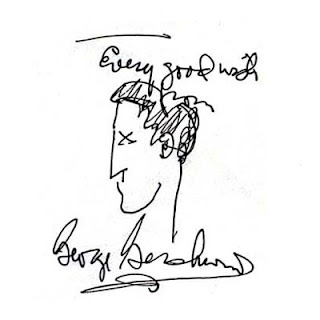 Then he wondered why I was angry.

This time I really let him have it. For the first time in my life I allowed myself to be totally honest with a bully. A "psychic" bully - the worst kind. He quickly emailed me a rejoinder (fortunately he doesn't live here, but hunkers down on the Island with the Satanists), which I deleted unread.

But it killed George.

It killed him for me, though he was already dead, but not dead, not really. Passing back and forth, but turned away now by someone else's cruelty. My interest in him didn't wane - it died, even though I never wanted it to.

Gershwin had women friends whom he respected immensely. He respected them intellectually, but there was very little romantic love. His sexuality has been much discussed, as if it's any of our business. I don't think he was happy, but he was joyful. Exuberant. By turns, when he didn't have very deep blues, indeed. Deeper than the deepest indigo.

I felt I was in touch with him. Suddenly - . I thought he was gone forever, and what happened? I don't know, exactly. The silly, playful gifs and Blingees and carefully collected photos now seem relevant again. I want him to stay, and I don't want any phony spiritualists wrecking this, wrecking my deep connection, my mysterious contact with him, out of jealousy or pettiness or even worse things.

Nothing will. Suddenly, something sweeps in: and I am reminded of that incredible Ira Gershwin line: "but the age of miracles/Hadn't passed." Simple as e=mc2, and as profound.

Posted by Margaret Gunning at 3:52 PM No comments: 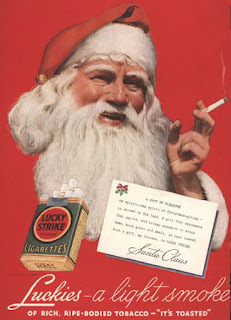 Here beginneth the minimizing of health dangers from cigarettes. Not sure when this started, but TV ads began to emphasize "light", "fresh", and other words which might lead the consumer to believe that smoking did no harm 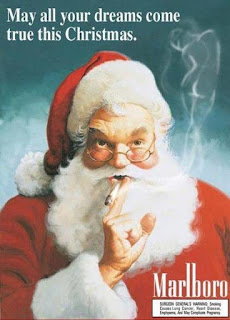 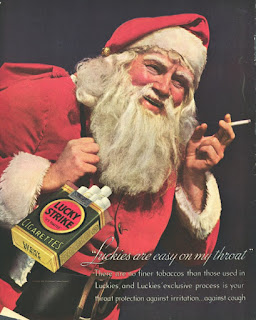 "Luckies are easy on my throat." I can't make out all the rest, except "throat protection against irritation, against cough". 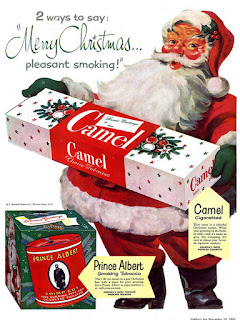 Give 'em a whole carton, why don't you? Indeed, I do remember when a carton of cigarettes made a nice Christmas gift, especially when beautifully wrapped. 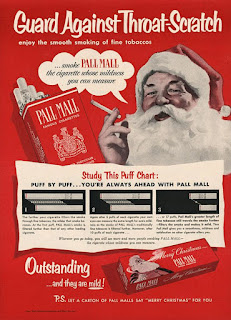 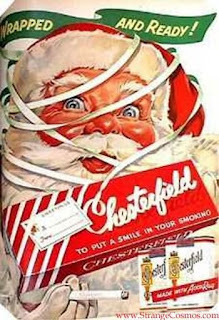 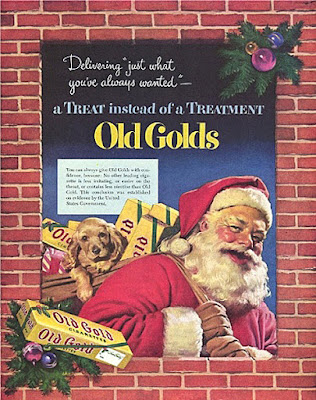 But here's my favorite.

Text: Delivering "just what you've always wanted" - A Treat instead of a Treatment

You can always give Old Golds with confidence, because no other leading cigarette is less irritating, or easier on the throat, or contains less nicotene than Old Golds. The conclusion was established on evidence by the United States Government.

Posted by Margaret Gunning at 11:27 AM No comments:

A gallery of creepy Santas 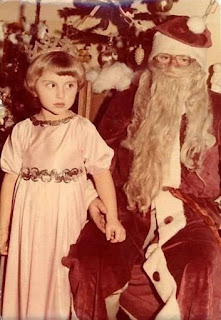 It wouldn't be Christmas without creepy Santas. These vintage photos explain once and for all why small children run screaming from Santa, even though their parents try to glue them to his fuzzy old cigarette-smelling lap for a photo op. 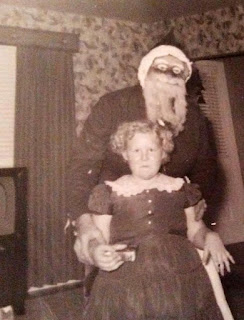 This is the Stephen King Santa, the little girl looking uneasy while waiting for her present. It had better be a good one. Modern-day Santas must keep their hands in sight at all times. This one doesn't. 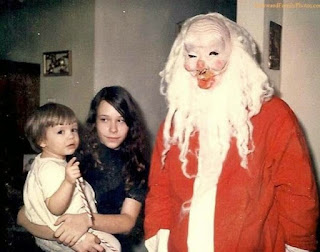 Santa and the Easter Bunny must shop at the same costume store, or buy them at Halloween. Here it's Mother who looks a trifle uneasy, though her daughter hasn't quite caught on to who or what this is supposed to be. 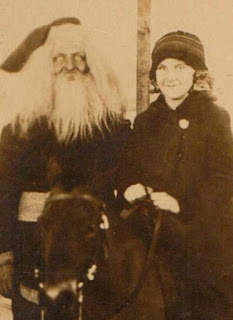 I tried very hard not to repeat Santas from last year. If I did, it means once was just not enough. Santa's electroshock stare is a classic. 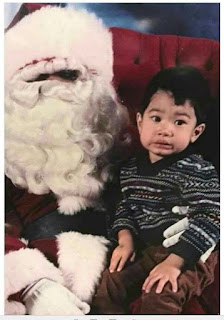 My favorites are the Santas who wear their beards funny. This is just wrong: the moustache sits atop the guy's nose, so that there is nothing but a black slit for his eyes. The little boy is just on the verge of screaming his head off. 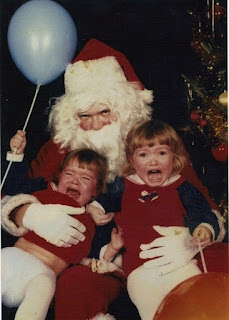 I always feel a little sorry for these kids. I wonder how their parents reacted to this photo. Did they have to pay for it? This goes back to the days when Santa was some guy the department store just grabbed off the street. For a few bucks, he sat there ho-ho-ho-ing for a couple of weeks. The store felt they were being benevolent, giving him some honest employment over the holidays. Who knows what he thought. 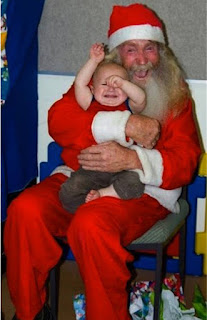 Another screaming shot, with Santa looking a little soused. 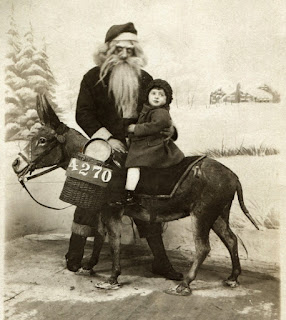 OK, this is a repeat, but do you see why? It's the bleakness of the thing. I suppose the donkey has some religious significance, but why is Santa part of a nativity scene? 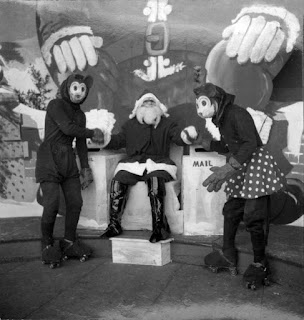 What are those things up there? Hands? Why?? Santa appears to have passed out, and those other two "things" are trying to revive him. What are they - cats, and why are they on roller skates? 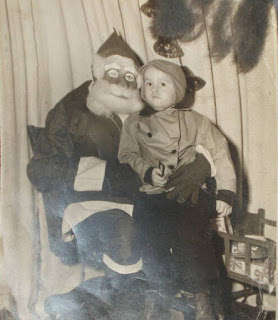 This is just - indescribable. 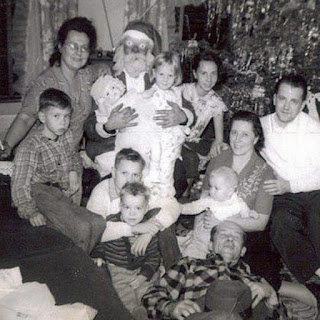 What is he holding? A doll? Why hold it like that? At least both hands are in plain sight. Most of the children look glum. 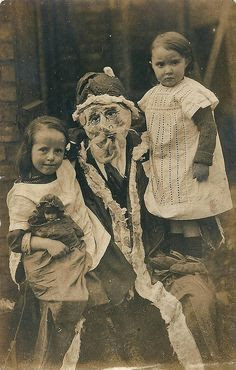 Worst Face Santa (or is it?). He looks as if his face has been run over by a Mack truck. Or perhaps it's melting, like the Nazis in Raiders of the Lost Ark. The kid on the right, while not crying, is not happy either. Small children have no idea what is going on, and nobody explains it to them. It's exploitation: sit up there and smile and look cute and have your photo taken, and shut up. 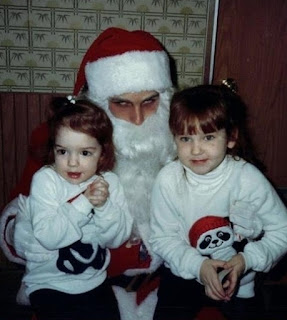 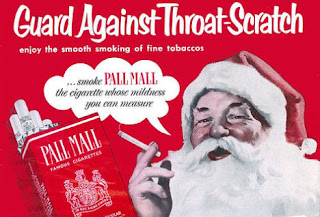 I thought all good Santas (like most doctors) smoked Camels. But I guess not. Nobody wants throat-scratch (an encoded term for throat cancer) in their ho-ho-ho. 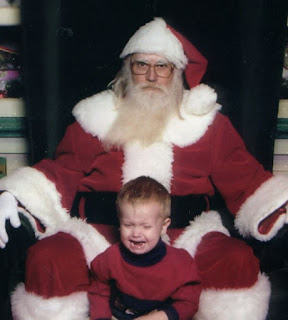 I don't think you'd see a Santa in this position any more. 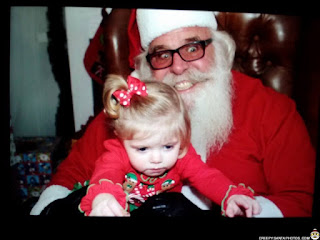 I think we have a winner here. From the demented expression, to the little girl trying desperately to get away, it all spells Christmas.


Posted by Margaret Gunning at 11:09 AM No comments: