And now, a word from our sponsor!

That face, that face, that wonderful face
It shines, it glows, all over the place
And how I love to watch it change expressions
Each look becomes the prize of my possessions. 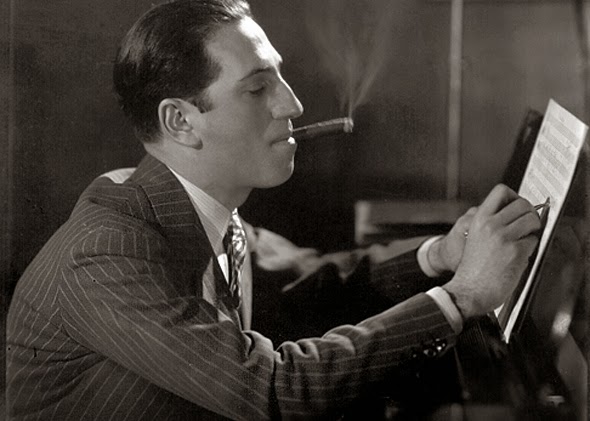 I see that face, that face, wherever I go
It's here, and it's there, bewitching me so
It's got my crazy heart in such a tangle
It drives me simply wild from any angle. 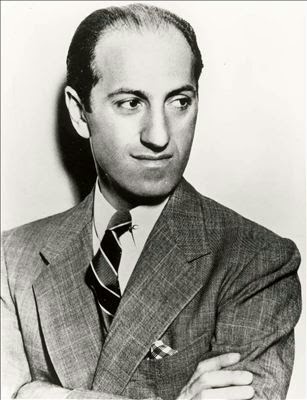 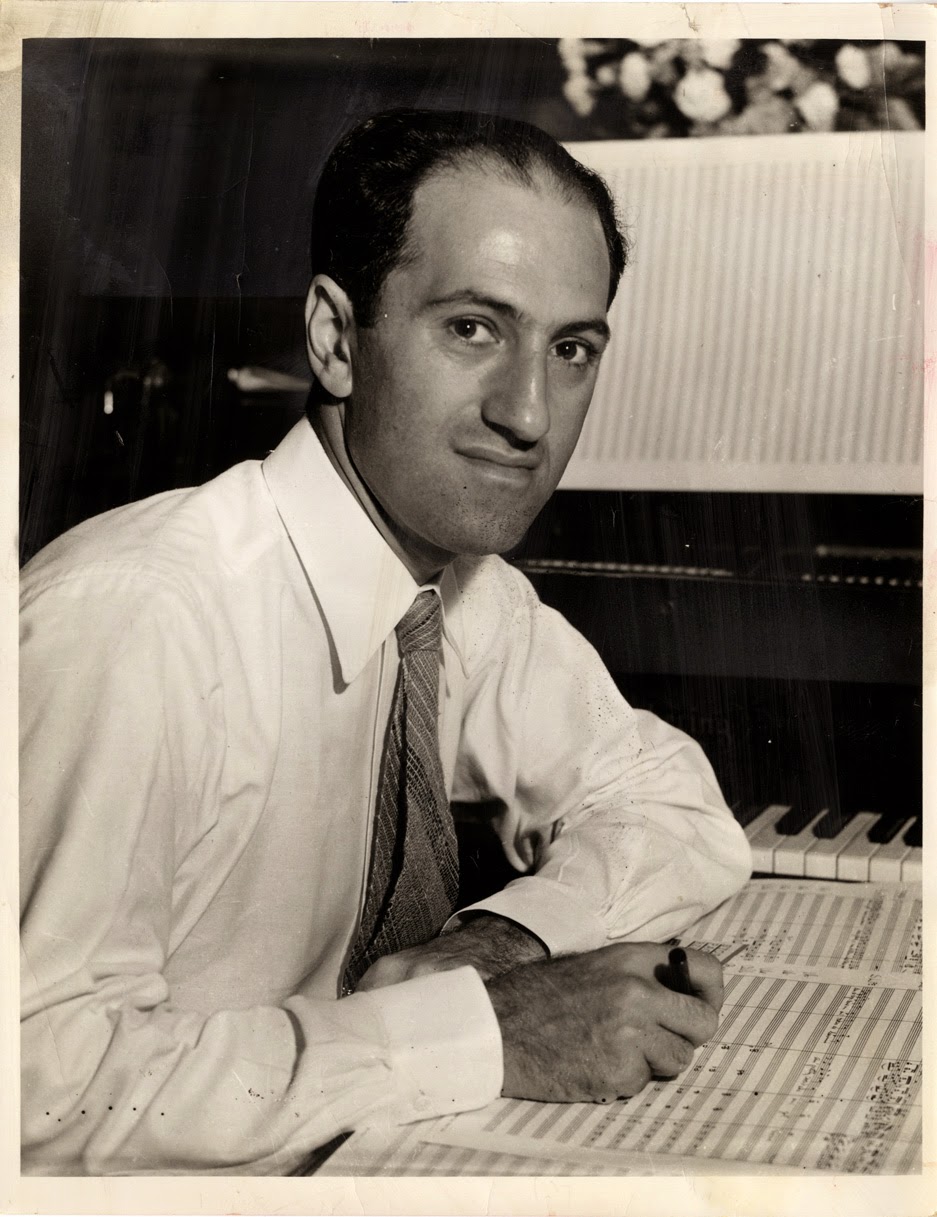 Oh, what a face, that face, it lights up a room
Intoxicates like heady perfume
No painter or photographer could catch it
No rainbow or no sunset ever match it. 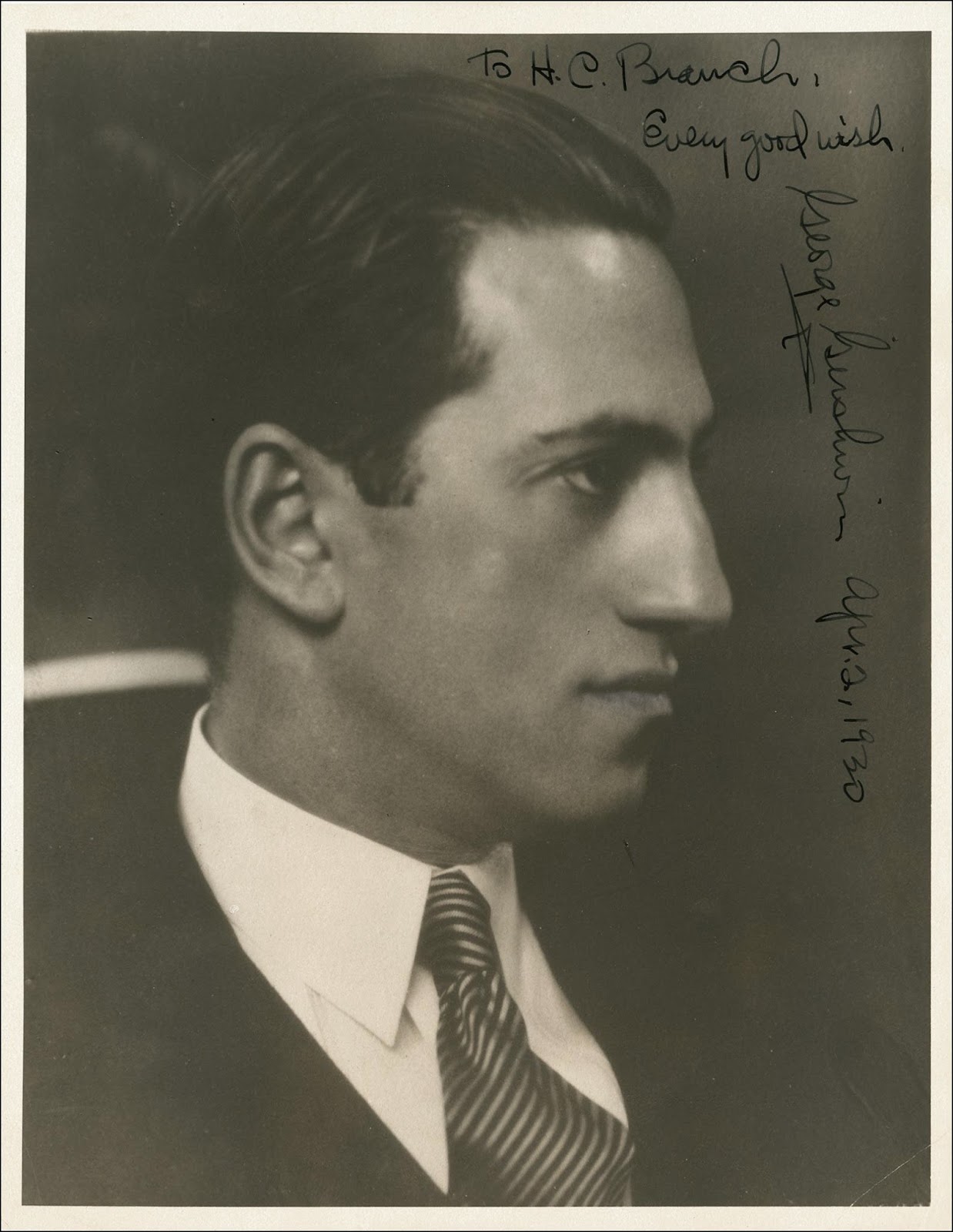 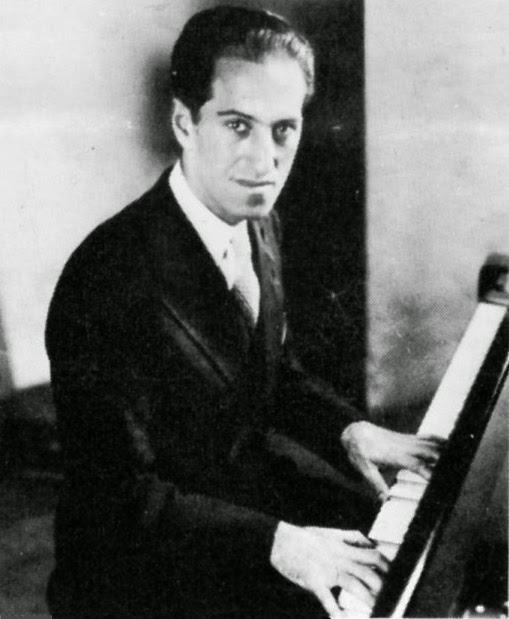 Posted by Margaret Gunning at 2:41 PM No comments:

Lost and found: the mystery of Alan Gershwin

This might be categorized as a Separated at Birth of a very different stripe.

I love a mystery, but this mystery has pushed me back time and time again, leading to more frustration than information.

I've been chopping my way through several of the multitude of George Gershwin biographies. Surely no American composer has ever been more sliced, diced, hashed and rehashed than GG. I finally found my way to the really smutty one (The Memory of All That, 1998) by Joan Peyser, the one that reviewers vilified for being inaccurate and making "outrageous claims", including the insistence that GG sired an illegitimate son with a chorus girl in 1926.

One indignant review of the Peyser book sniffily claims that "the family has never recognized Alan Gershwin's claim to their", etc., etc., blah blah blah, but why would they? The stigma of an illegitimate child could ruin a career back then. No doubt the woods were full of opportunists and pretenders, not to mention gold-diggers. After his death, GG's affairs (literally) were hermetically sealed by Ira and Lee Gershwin, his brother and sister-in-law, who lived a long time and were bound and determined to show only the more brilliant facets of this enigmatic jewel to the public.

That restriction remained in place long after both of them were dead. 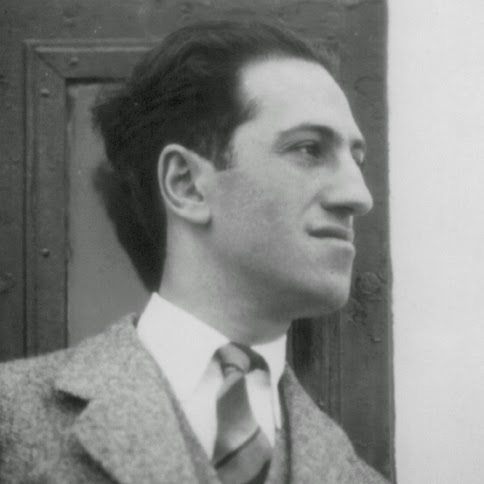 Strangely enough, in subsequent reviews and commentaries on Peyser's book, critics have become more forgiving.  Over time, her formerly sleazy tell-all has found its way into the Gershwin canon (not the boom-boom kind: I keep telling you!). A three-inch-thick Gershwin tome by Howard Pollack, the "definitive" bio until the next one comes along, admits Peyser's scholarship is a bit wonky, but nevertheless cites her work three or four times in a fairly straightforward manner. It's included, which in itself lends her work validity.  By some mysterious process that I don't understand, her controversial, vilified, preposterous and completely discounted biography now "counts".

Could it be that she got it right?

But here's the thing. When I try to dig up some hard, plausible evidence that Alan Gershwin exists, or ever did exist, I can't find anything. There is a glorious photo gallery of "someone" - the photographer claims it's AG - taken when he would have been 88 years old.  The fine facial bone structure that has kept him photogenic all these years is a trait he shares with George (who never had the misfortune of growing old). But I can't post these, they're protected by the web site, and there's no text with them that I can find. Nothing to explain the photos. Nothing at all. 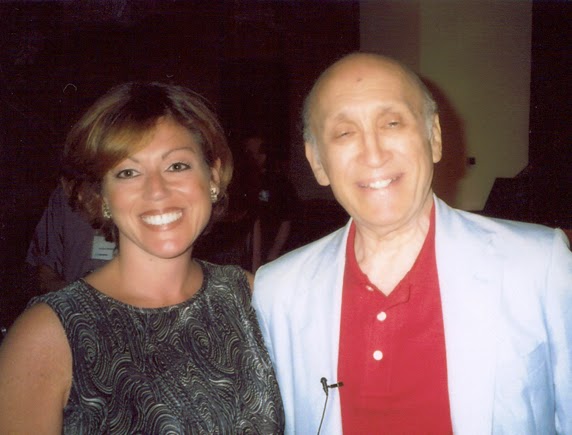 The few sites I found that even mention Alan Gershwin now identify him as "son of George", not "supposed" or "alleged" or any of that. No one seems to question it any more. But except for a claim to be a composer in his own right, this man of nearly 90 left very little trace. I found a YouTube video of just one piece he wrote called The Gettysburg Anthem, performed a few years ago at a small church for a commemorative Lincoln event. But the piece was composed FIFTY years ago - a bit longer than the time it took for GG to snatch his notation paper off the piano and perform it in public the same night. In his case, the smoke was still rising, the ink was still wet.

And that is all. No more videos. No more compositions. Nothing. I modestly have to tell you that there is a hell of a lot more of MY stuff on the internet, maybe because I don't know when to keep my mouth shut.


Tantalyzingly, there is a Facebook page that had me racing to find it, but in essence there's nothing on it except a link to a review from the late 1990s of the Peyser bio, one of the very few positive ones that thought her claims of an illegitimate son were valid.

There's also a cropped photo of AG's mouth, the feature that most resembles GG's. Hmmmmm. 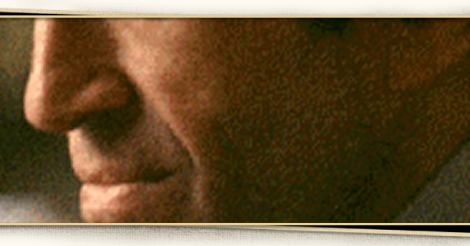 If you're to believe this strange and ultimately unproven story, people would see the young Alan Gershwin and nearly fall over backwards because they thought they were seeing a mini-George. Imagine what a shock it must have been after GG's untimely death in 1937. Alan Gershwin was a walking stigma, or else just an oddity with a chance resemblance. But it wasn't just the way he wore his hat, the way he sipped his tea. His gait, his way of inhabiting his lanky body, his nervous energy and the smile that made you hear bells and the intoxicating rattledy-bang of trains - they really did seem to match up.

AG has never submitted to a DNA test. And of course, there are lots of examples of the Separated at Birth phenomenon (many of which I've posted here) that are almost creepy in their similarity.

Might AG be one of these? Now that he has aged, the resemblance isn't quite so startling, except at certain angles. The photo most widely circulated plays that up.

And yet, and yet. One of the tidbits I found, deep in the archives of a website called The Blacklisted Journalist, was this piece of information, true or not:

Alan Gershwin was born in Brooklyn on May 18th, 1926, his birth certificate recorded in the name of Albert Schneider, with Mollie Schneider, Alan's mother's sister, listed as his mother.
In Alan's early years and during his occasional visits with his famous father, Gershwin could never find the courage to acknowledge Alan as his son and introduced Alan as a "son of a friend".
For what appears to be endless years, Alan waged a futile battle for full acknowledgement. And while the evidence is overwhelming, denials rage on.

After a sad childhood, lacking even a shred of his father's musical genius, Alan approaches the waning segment of his life still hoping the world will, at the very least, announce him as "the son of George Gershwin," not Gershwin's "son of a friend." 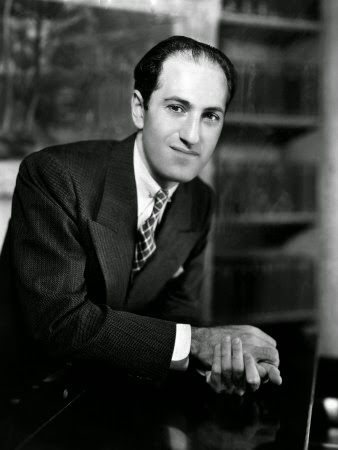 Now that the world is paying at least a scrap of attention, at least enough to take his picture and set up an empty Facebook page, perhaps Alan Gershwin (IF he's Alan Gershwin) feels vindicated. Believe me when I say that I am a bloodhound, and if there is any more information to be found, I will find it. But I haven't found it yet.

Some people coat-tail all their lives, and it's sad. Meanwhile, a weird thing has happened: Alan Gershwin has morphed into someone who looks sort of like George's grandfather, if grandsons bore that much resemblance (which they don't).

In fact, in a rare photo of George's father, we see no resemblance at all.

Just when I am ready to write this off as a strange posthumous form of stalking, I think of Charles Lindbergh. Lindbergh was a bona fide American hero, an aviator who flew solo from New York to Paris in 1927. Tickertape parade, picture on the cover of Time, the whole works. (Except Time probably didn't exist then.) Though he was supposedly happily married to the longsuffering Anne Morrow Lindbergh, rumors dogged him throughout his life that he in fact had several families scattered all over Europe, and that he had fathered, according to the garbled information I found, either four, five or nine illegitimate children (along with the six he had with Anne). These rumors seemed as preposterous as the murmurings that he was a Nazi sympathizer, until the surviving children took DNA tests in the mid-2000s and proved to the world that it was all true. 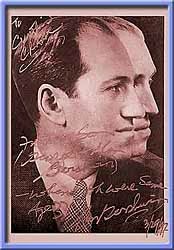 This one is truly bizarre, one of the strangest photographs I have ever seen. I have no idea where it came from, who took it, and why. Like all the other shreds I found, there's no explanation for it. It appears to be a shot of Alan Gershwin's face in profile, directly behind that of his father, perhaps made as a deliberate comparison. This would have been hard to accomplish, I mean technically, back in the day, so it may be a sophisticated form of photoshopping. The scribbles all over it are somewhat similar to the scrawling George liked to do when he gave someone a photo. He was even known to write little musical phrases, like-a so: 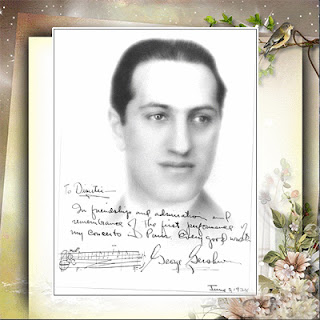 Or were the scribbles by George himself? Unlikely - they're big and sloppy and nothing like George's small, neat, upright hand. (Sidebar note: apparently George's original manuscripts were as immaculate as Mozart's, often without a single correction.) They also obscure the photo, which would have driven him crazy. In spite of the dash and verve of his music, his vibe suggests to me obsessive attention to detail and an insistence on order. On top of that, like most geniuses he was an inherently narcissistic personality who needed the world to see that incredibly beautiful face.

So we are left to compare basic features: the flattish face, the aristocratic high-bridged nose with its handsome Jewishness, the long clean jaw reminiscent of a movie star's. The sloping forehead with its receding hairline. The sweet, sad, expressive eyes that one jilted girl friend described as "heavenly". But most of all, and perhaps this is why it is on the FB banner, the "Hapsburg lip", pouty, sensual and a little sardonic. George had a killer mouth, with the kind of insolently brilliant smile that would light up a foggy day in London Town, or anywhere else.

What do you think? Are you with me here? Am *I* even with me here? Due to the frustrating lack of information, I don't think I will ever know for sure.


BONUS! Just found an incredible version of the "superimposed" GG with Alan Gershwin. It was for sale on Etsy, of all things, for five bucks, an "original", and that's all it said. The mystery deepens. . . 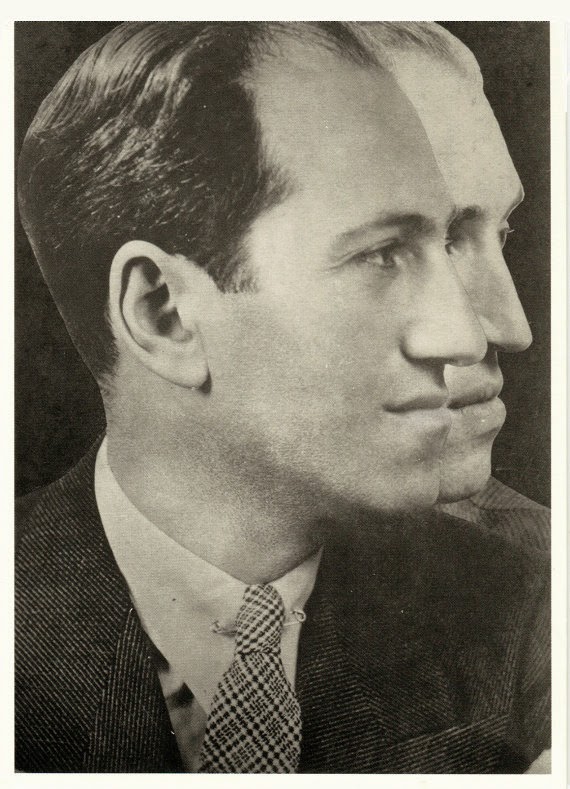 THIS IS HUGE! Recently I sadly learned of the passing of Alan Gershwin. But with his death, yet more mystery is emerging. Anyone who is interested in this strange case should read the article by David Margolick from the New York Times. The mystery may be solved - or is AA more enigmatic than ever?