This is the one that started it all. But when I saw it a couple of years ago, I had no idea what I was getting into.

YouTube is choked with DIY methods of playing records non-electrically. If you had an old Victrola, the problem would be solved for you. But people figure things out in the damnedest ways.

I have one of those impossibly vague, grainy memories of seeing something on TV - it had to be something like the Goon Show or Beyond the Fringe, surely one of those zany British things, but definitely not Monty Python. Something else. Anyway, the sketch depicted a huge record sitting on the ground, and a maniacal person with a big stylus running in circles all around it. Thus playing it.
But I digress.

I was all set to think this was the simplest and most innovative way to play a record manually, when I came across THIS:

For the love of lovely Christ - this is even simpler, if you're to believe it. I saw another video similar to this one which had an old stylus taped inside a cone of paper, but fuck that, this is so much easier! If it's a fake, well then it's at least an elegant one. And good night.

OK, it's the next day, and I'm not satisfied with those couple of videos. Here is something I have imagined only in my dreams - a record that you can actually eat. As with most impossible things, on YouTube it turns out to be possible, if highly improbable. And as usual, there are at least two people to have created the "first", but both look viable to me, unless the whole thing is faked. Send me a couple, and I'll do a taste test.

I can see Bentley doing this - but no. He'd take a flying four-footed leap straight up in the air and land on the record, this creating musical havoc. 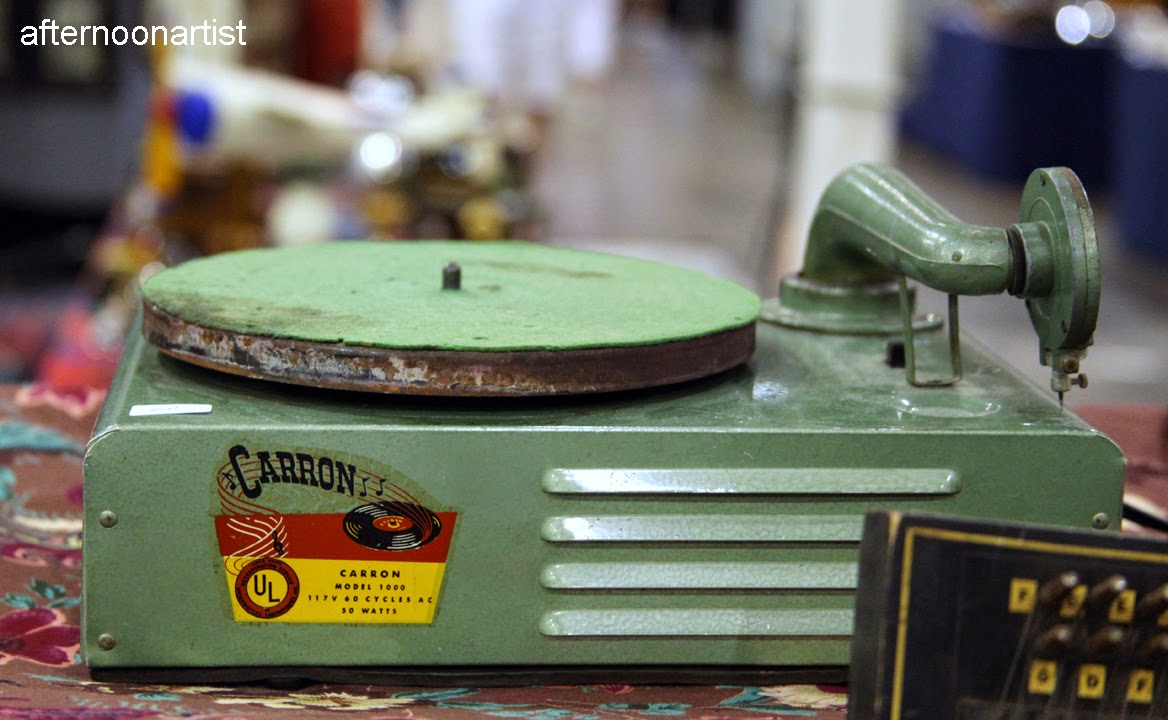 POST-BLOG GLOB. So this got me thinking about the old record players of my youth. For the most part we weren't allowed to use the deluxe model, the Seabreeze, which was a large wooden cabinet with a record player inside it. I kept using it well into the '70s. No, these were cheapie things that often incorporated a carry-case, so you could do up the fastenings and tote it around with you. These things had cords, as I remember, so toting might be a problem.

A lot of them were branded: Woody Woodpecker or Howdy Doody or Mickey Mouse or some-other-type. Things sounded best on Howdy Doody. 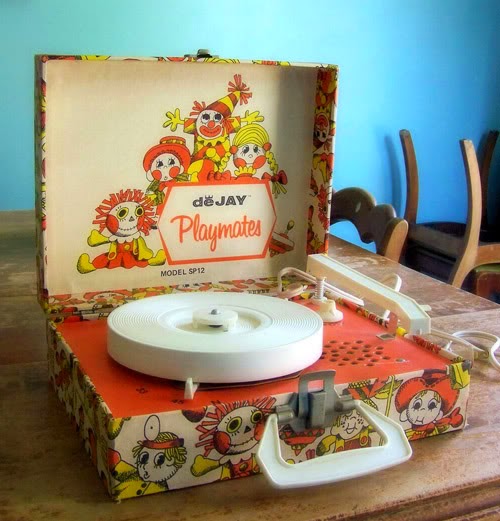 But there was a whole generation which must have been older than my late-'50s models. They're hideous enough to be completely fascinating to me. I just don't "get" the construction of these. They look like sewing machines, or else curling stones (coffee grinders? Primitive space crafts?). I don't see speakers anywhere. Tinnyness was a prerequisite of these things, and since they were made of tin, boy would they be tinny.

I tried to make a photoshop collage of these tiny little eBay-sourced pictures, but gave up because it hit new lows of ugliness. Many of these are in the same strange form. so there must have been a lot of them around. The tone arm would weigh approximately one thousand pounds, so a well-played record would be worn out in about a week. 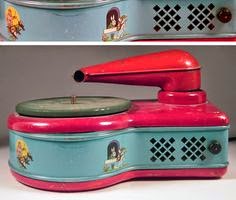 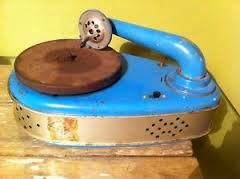 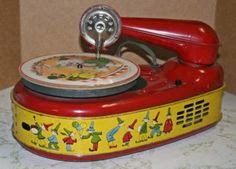 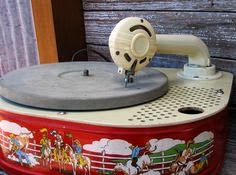 I don't see why it is that I imagine water dripping from these. They have a sort of pumplike quality - or no, is that a flatiron? You could iron your clothes with the top one. The second one down seems well ahead of its time, in that it looks to be playing a chocolate record. 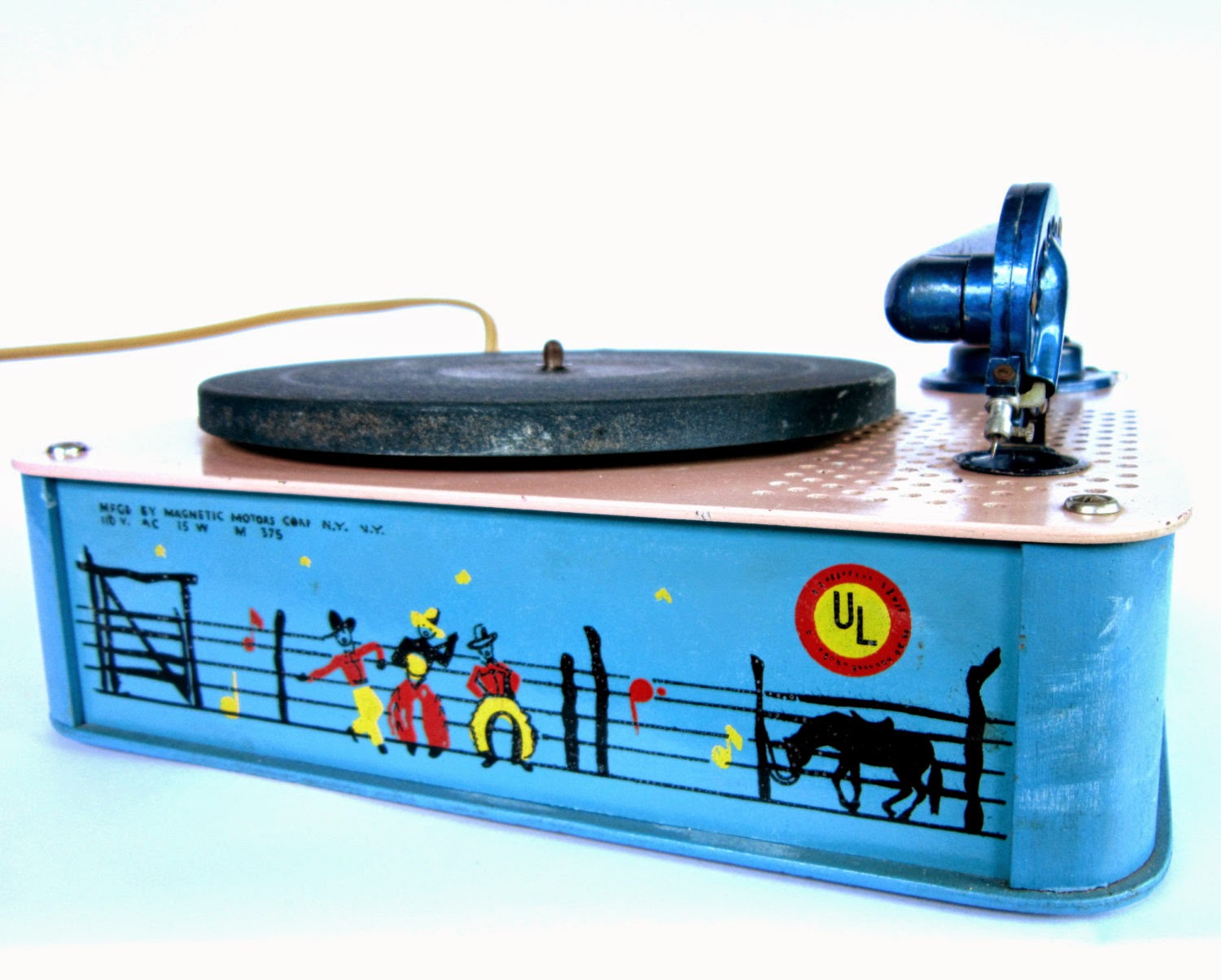 This is a tin model of the Titanic. The black pancake on top of it is a mystery. I wonder why turntables needed to be 1 1/2 inches thick.

Did it need to be so ugly? 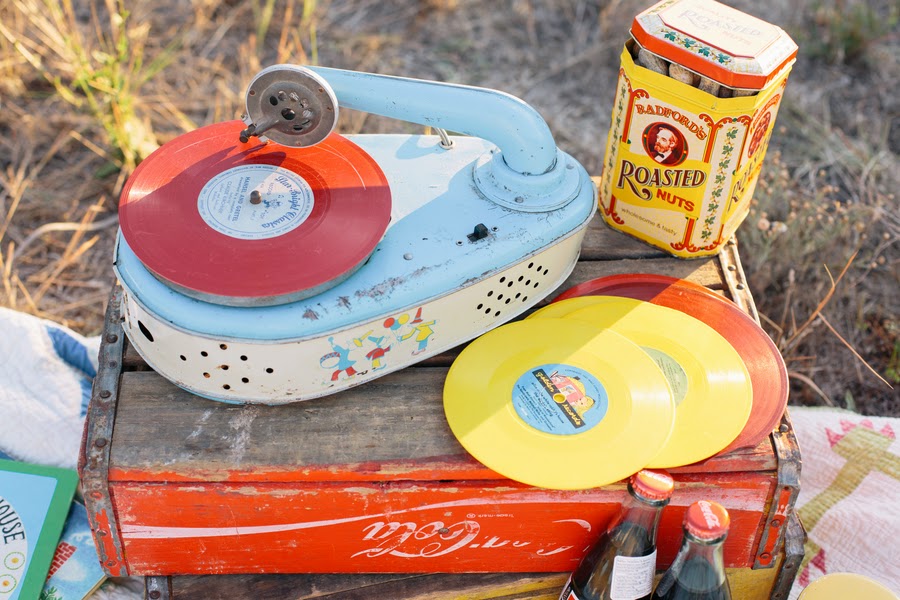 This is a carefully-arranged portrait from a vintage site. Pretty gorgeous, I'd say, but it still looks like some sort of drainage system. Or the Starship Enterprise. 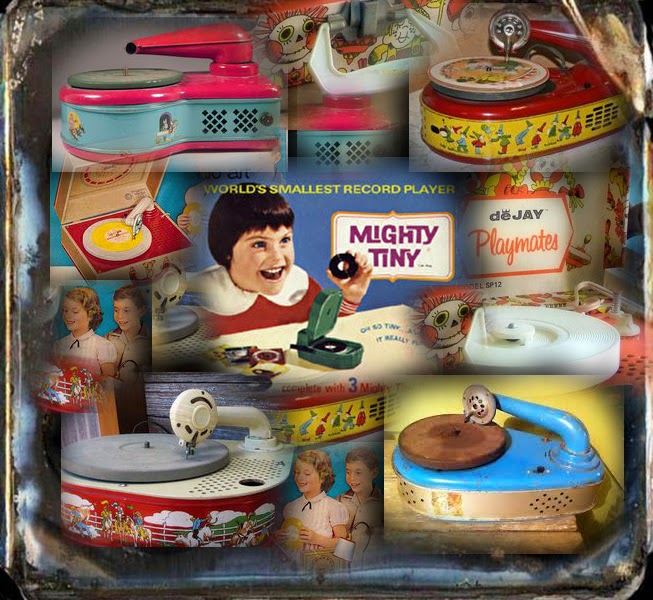 All right, here it is, my collage, and it's ugly - but the whole genre.is ugly to begin with. 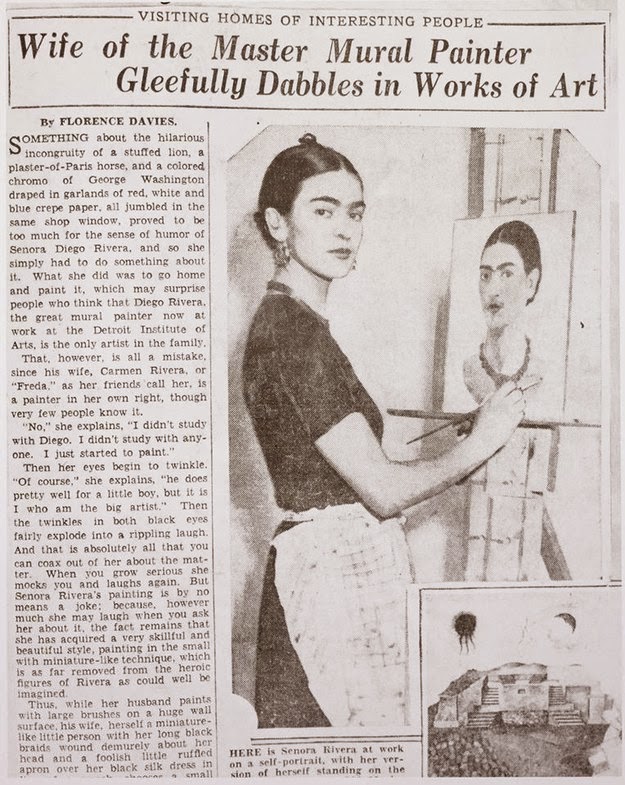 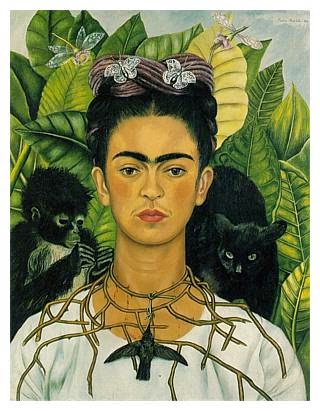 Posted by Margaret Gunning at 11:01 AM No comments:

Fakebook: when you can no longer fake it

Well this is just dandy! I went to sleep yesterday with 2,012 likes on my author page and now I wake up to find I only have 1,960, on the reason that the likes from inactive accounts have been deleted. This is so unfair! If someone liked my author page, that means they liked me and/or my writing. If they died, changed their names or have simply deleted their accounts, that doesn't mean they've stopped liking me or my books. I've contacted Facebook about it and am anxious for a reply. I don't know if any of you have had this unpleasant surprise, but I strongly encourage you to protest against this policy. It's rude and unfair for everyone.

Well. Let me tell you right now, I am so inundated with thousands of "likes" that I didn't even NOTICE a couple of them had been dropped from my author page for some crass reason that is beyond my control (such as dying: what a feeble excuse for no longer liking my work!). As a matter of fact, today's posts on Facebook all seem to be along these lines. They're either hot-air-style self-promotion or humble "admissions" of receiving a major literary award (which they don't deserve, of course, but here's the name of the book anyway). People told me FB would be a great way to promote my book, but so far it's pretty much of a bust.

I'm at the point of surrender. Not willingly, not gladly, though there is a certain amount of relief involved. Trying to make a go of being published, even trying to break even and not end up (humiliatingly) in the hole is, for reasons that forever elude me, beyond my grasp.

I got to the party late, you see. Everyone already knows each other, so when a blank space walks into the room, no one sees it. Or so it has always seemed.

I have no regret whatsoever about writing the novel. It was exhilarating, and proved I COULD write again, book-length, after what amounted to wholesale spiritual and physical collapse. Then there was the thrill of getting it published, which I honestly thought would never happen. But oh the frustrations. A new FB friend recently asked me if the Lloyd family liked my book. LIKED my book? I don't know how many copies I sent them, and the silence was deafening. Such people receive stacks of books from would-be would be's, and they never get to them. I'm not saying they're not busy. They are. But the total lack of acknowledgement, the sense that another $20 or $30 (depending on postage) has been thrown into the Grand Canyon is beyond disheartening. This is a published-copy form of the infamous slush pile, a phenomenon which never goes away and which makes writers want to open a vein.

There have been heartbreaking moments of hope, as when Rich Correll phoned me from Los Angeles out of the blue, to tell me he loved my samples and wanted to see more. But suddenly, for no reason I can fathom, he stopped answering my phone calls and emails, and would not even tell me if he received his copy. I was left hanging, which to me is far worse than being told to go take a flying leap at the moon.  The only answer I received from the 25 or 30 I sent out (some to absurd places I'm too embarrassed to mention) was from Stephen Fry - his assistant, who thanked me and assured me he'd never get around to reading it. But it was acknowledgement. I exist. Whoopee!

So if you can't stand this particular form of heat, just get out of the kitchen. But it does make me wonder what awful deficiency in me (for others DO succeed, like the Likes Lady above) leads to this sort of failure over and over and over again, when I am so often told by readers how much they enjoy my work.

But maybe it's because they're dead.

(p. s. This is a vastly rewritten version of a post that was so angry and bitter and devastated, I finally decided - even though nobody is going to read it anyway - that I just can't put out that kind of energy.)

Posted by Margaret Gunning at 10:25 AM No comments: