So this is what I've been working on, with Blingees. I was  getting a little tired of the sparkles and dancing hearts, and started experimenting with backgrounds on black-and-white photos (of Harold, naturally!). I'm finding out that less is more, and you should leave your foreground figures strictly alone. Thus they stand out rather alarmingly against the pulsating, flashing backgrounds. You could, if you wanted to, just use one type of background, maybe that swirling grey. I see now that it kind of dances up and down, when it's properly supposed to rise like smoke. The thing is, the more "bling" you add, the slower and jerkier the animation. Took me a while to find that out. I don't have Blingee 2, either, because you have to do something to your computer, and they want all sorts of personal info from you that I won't give. The top picture I'm not sure of - might be The Cat's Paw or Welcome Danger, because there's something Chinese about the whole thing, plus there's a dead body on the floor. The bottom one is, of course, my beloved Professor Beware, which I will probably never get to see because it is Lost. In all the stills, and there are hundreds of them, among the best of any of his movies, he looks adorable, with this stunned, panic-stricken look on his face that only Harold Lloyd can do.

The incredible genius of Yo Yo Ma

Every once in a while a piece of music pops into my head unbidden, from who knows where. We had a record of this piece played by Rostropovich, way back when, and listened the grooves off it. It's a gorgeous and amusing tone poem by Richard Strauss based on the adventures of Don Quixote, the Knight of the Woeful Countenance, and his sidekick Sancho Panza (I nearly said Pancho, but that's the Cisco Kid). This is YouTubed in six parts, but still worth hunting down and piecing together. This is my favorite of many favorite parts, the middle section, shimmering and shining with idealism like The Impossible Dream (and I must look up the best version of that one, sung by Richard Kiley). I always weep and bawl while listening to this, but then it seems I weep and bawl all the time now. Harold-itis. I just get the blues - I know I want this too badly. I can't see how anyone will get it, and I've put so many years in. The unreachable star?

Posted by Margaret Gunning at 9:55 PM No comments:

The bunny from hell: an Easter tradition 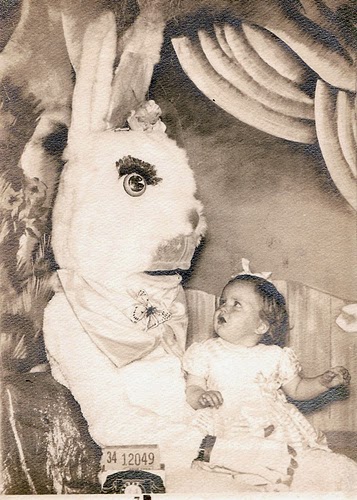 At this time of year, you start seeing pictures of Easter bunnies so horrific, they make tawdry and terrifying Santas look downright festive.

It's hard for me to believe that this bunny suit was ever designed to be anything but horrible and frightening. This little girl has unusual composure while being forced to sit on the creature's lap. Most of the kids pictured here are screaming for their lives. 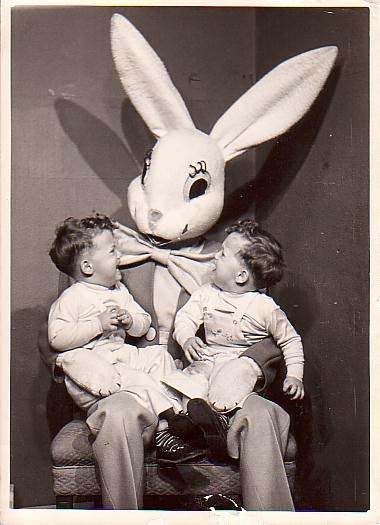 This is a good example of the time-honored custom of forcing small children to sit on the lap of, not just a total stranger (and haven't all kids been taught not to talk to strangers? How about sitting on their sweaty, motheaten knee?), but a hideous mythical creature they used to think was cute, fluffy and benevolent. Nothing  good could come from this pointy-eared bastard. 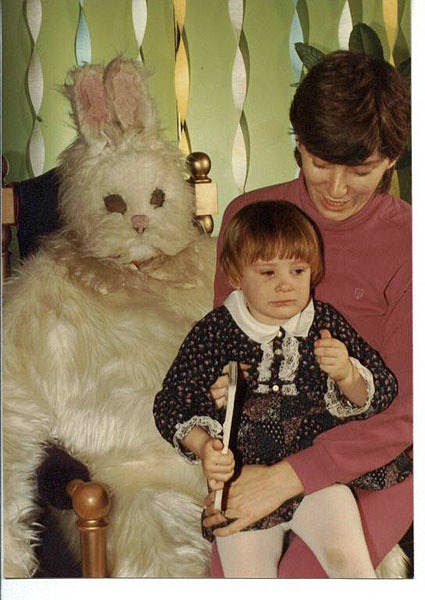 This is the Easter Cat. At least it looks like one. Whoever made the bunny suit kind of went wide of accuracy. The lifeless eyes and sagging body are already causing this little girl to whimper. She probably can't wait to get out of there. 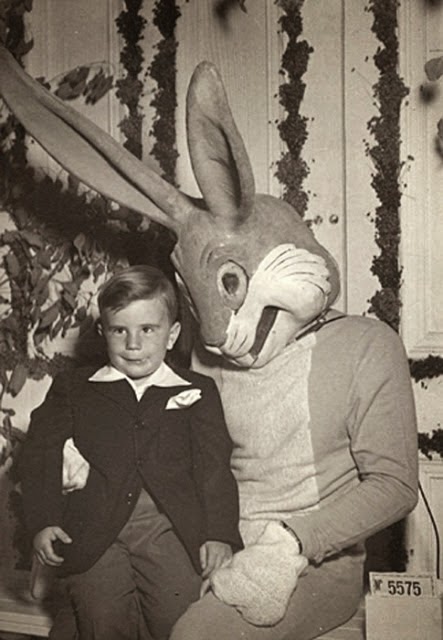 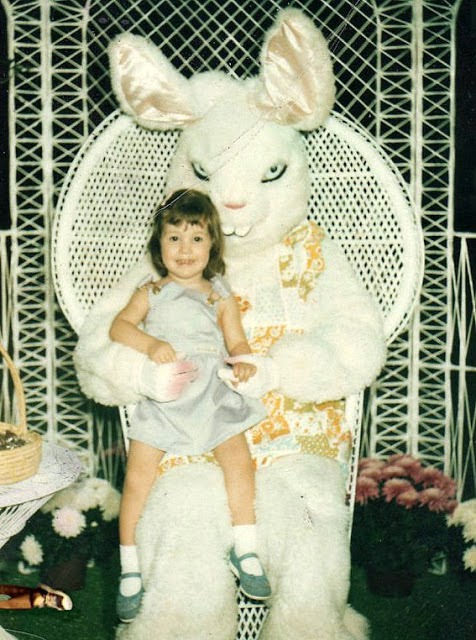 This is a bad bunny, just bad. The little girl has mustered a smile, but is waiting to flee as soon as he gets his wretched paws off her. Dye this costume red, and it would make a pretty good Satan. 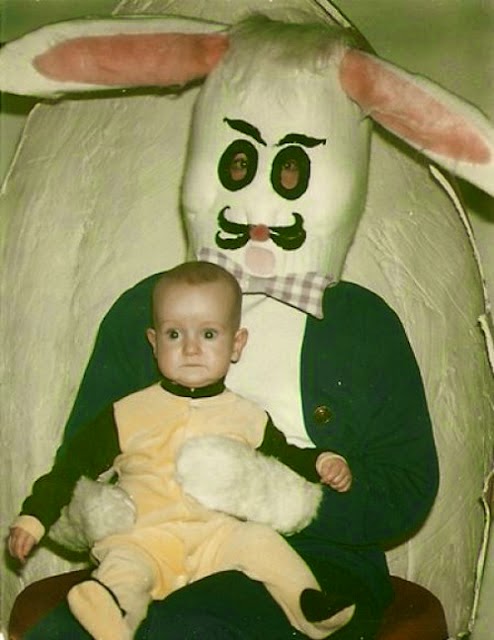 There's a web site called Cats that Look Like Hitler, but here I am proposing a web site called Easter Bunnies from the Third Reich. The large, black-rimmed holes with human eyes staring out of them are particularly menacing, and the moustache. . . that IS a moustache, isn't it? And why are the ears at right angles to the head? This isn't even a real costume, as the guy is slouching around in a cardigan and slacks, with only a hideous head and fur mitts to complete the ensemble. How Goebbels would have loved it. 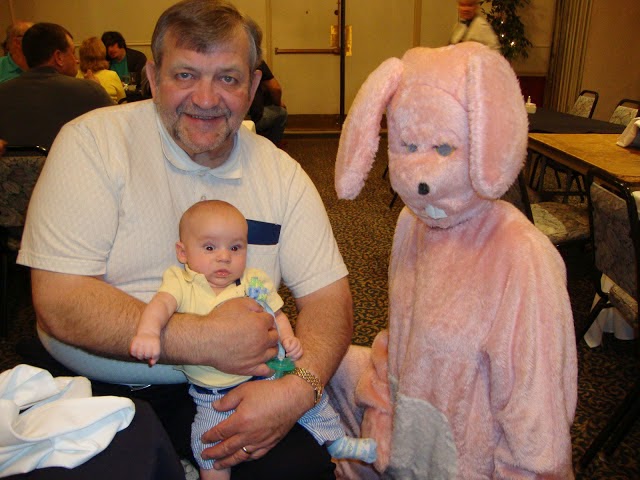 I call this one the Abilify Bunny. His antidepressant has stopped working and he doesn't have the energy to go to his doctor. One of those little clouds is following him around, like in those ads. 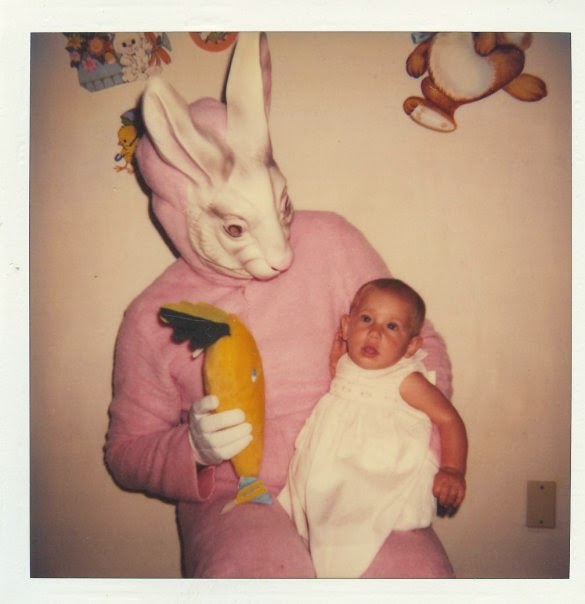 This one I call the WTF??? Bunny. What's the deal with the face? Why is it jutting out of the guy's head? What is that thing in his hand? Is it a carrot or a Subway sandwich? You have to wonder who designs and sews these things. It looks like they may have chopped the head off a big plastic display bunny and welded it on. 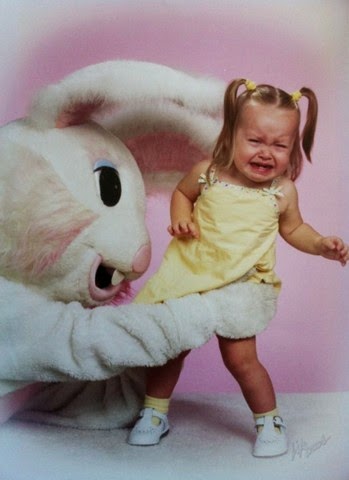 I call this the Action Shot. Did you think you were getting away from me, Little Girl? Think again! NO ONE escapes the Easter Bunny from Hell! You can run, but you can't hide! 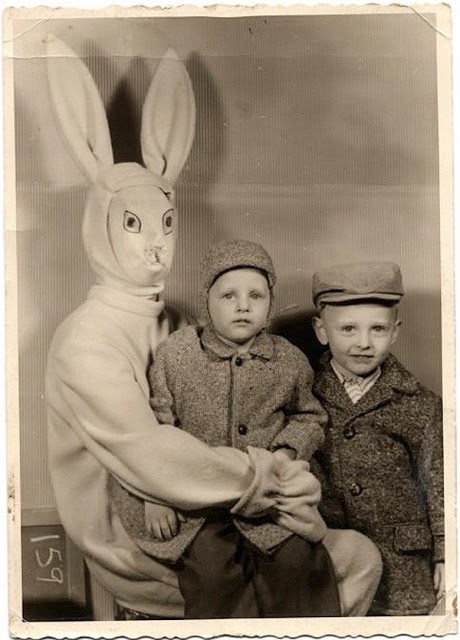 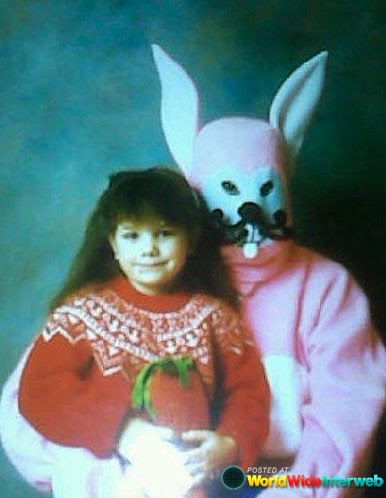 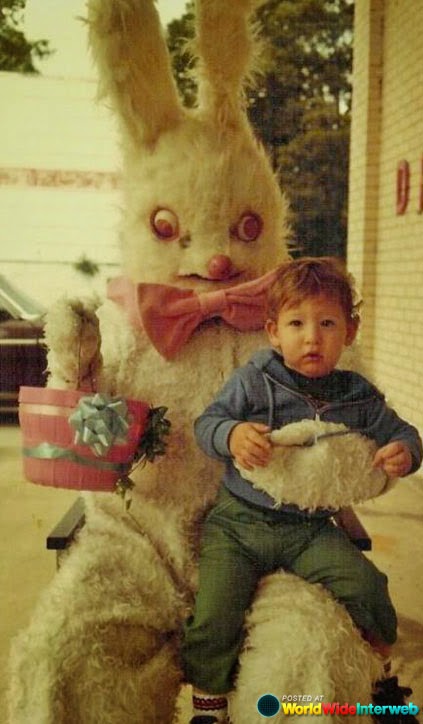 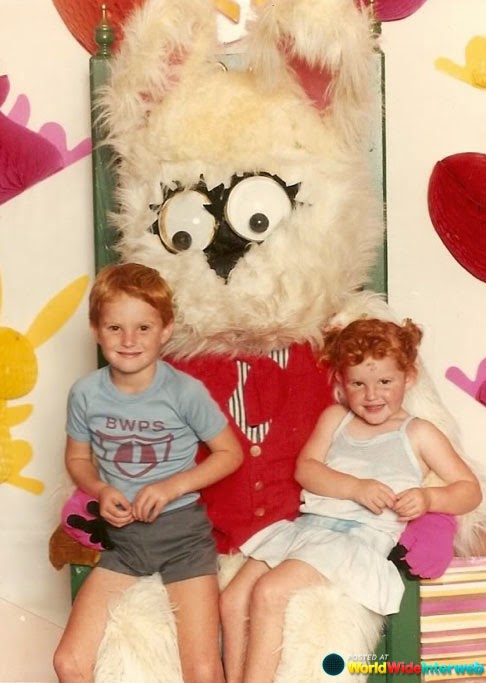 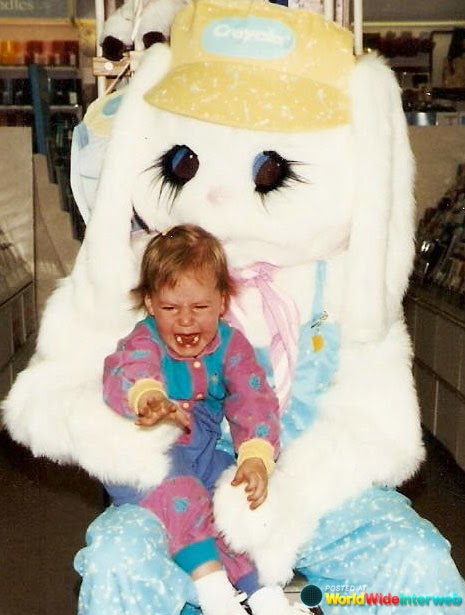 Who makes these costumes, and should it be legal? 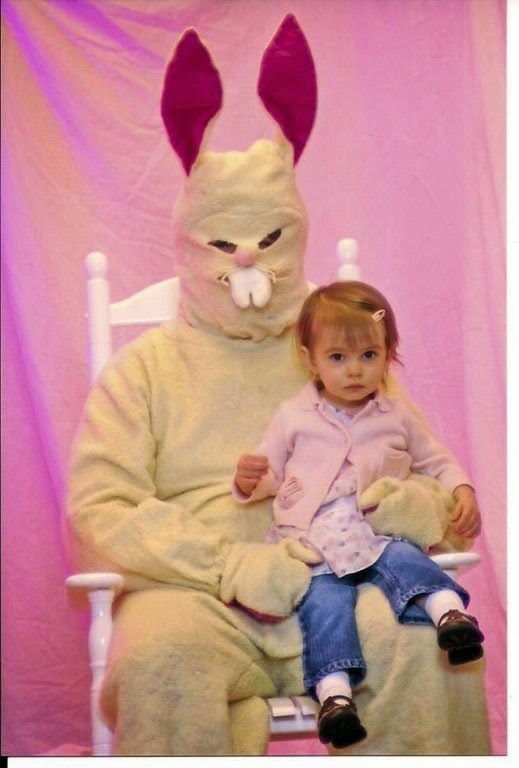 Wanted for holding up liquor stores. 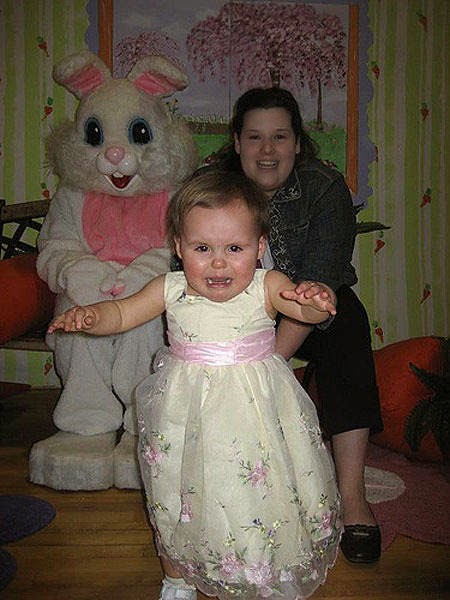 Ain’t here yet, but
S’gonna be Easter,
That season of vinegar,
Of Paas egg kits 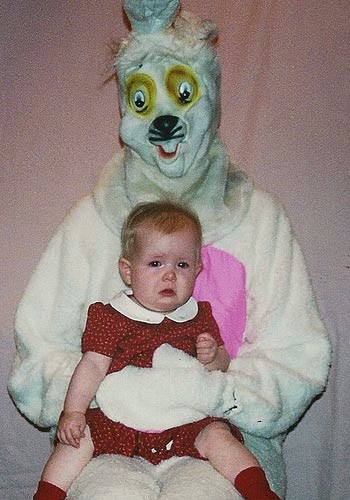 Now full of things like
Glitter glue and beads and
Twirly tops, whatever they are and
Foil things and
Punchout things

Ya dip the aig in, see, like
This sort of, and it comes out
All bright and sparkly and
Half this color and half that color and 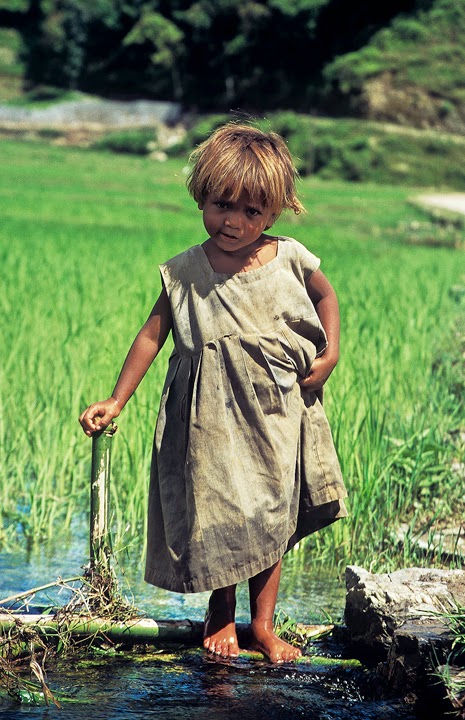 Vinegar water with color in goes all over the table.
The thing with the most dyee of all is
Your fingertips, which are kinda like rainbows
Some so dy-eed they’re black. 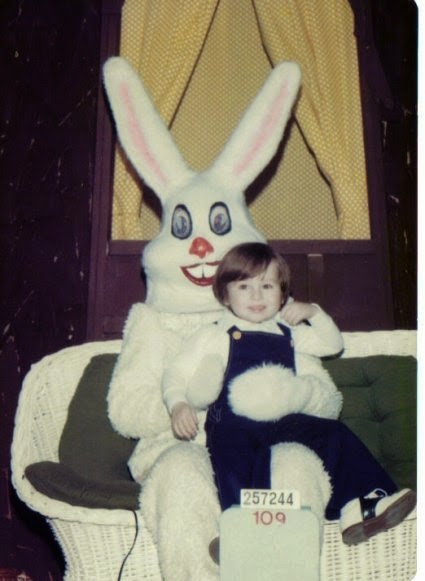 No one wants to eat these aiggs, so fiddled and dipped and dried
Except Grandpa, who has one for breakfast
But everyone cried because he had to break the shell
And the smell of sulphur was really something awful.

Posted by Margaret Gunning at 2:34 PM No comments: