Sums up my feelings about 2013. Keep watching it for five seconds and your eyeballs will fall out. 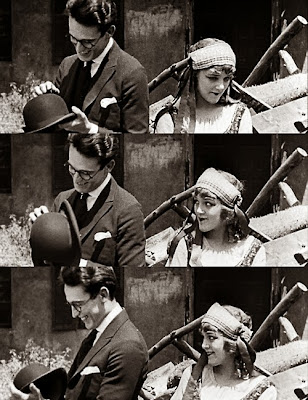 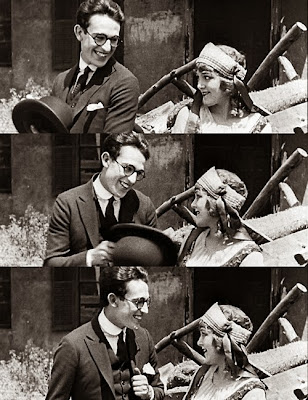 A Harold Lloyd whatever. Minifilm. 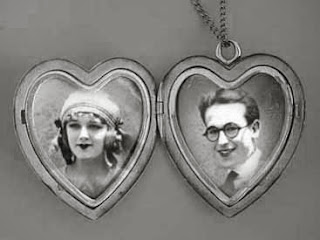 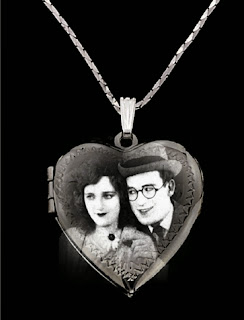 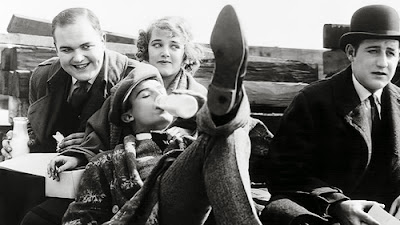 Today I found this, the last of a set of three (I think). What movie it is, I don't know, but Roy Brooks is in it, so it must be relatively early. Candid shots on Harold's movie sets are hard to find. Harold seems to be cutting up as usual, but probably for the cameras. Mildred looks like she'd just like to get back to business. Roy Brooks is a bit of a puzzle - I'd like to try to find out more about him, but I'm not sure it's there.

This reminds us once again that Harold Lloyd looked NOTHING like Harold Lloyd. How tiny Mildred looks between them! The men's protective attitude is obvious, but who wouldn't want to protect Mildred Davis? 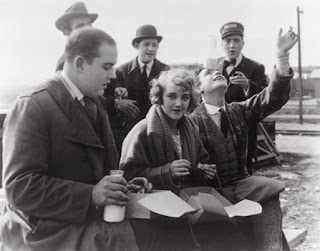 Roy Brooks appears to be holding a large bottle of milk. Presumably, the same one Harold was drinking out of in the first shot. No nipple in it, though. 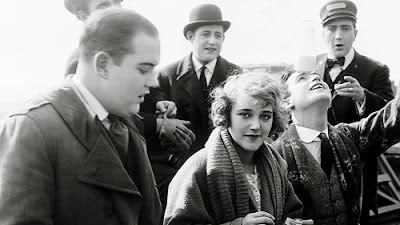 Closer shot. She looks cold. Not sure if Harold is watching an airplane ("Plane! Plane!"), or just throwing a peanut up in the air. 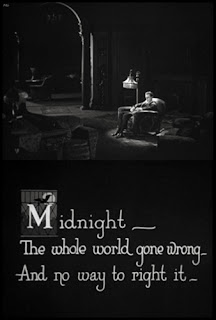 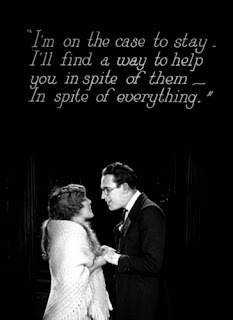 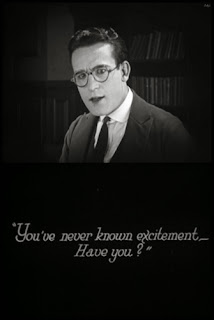 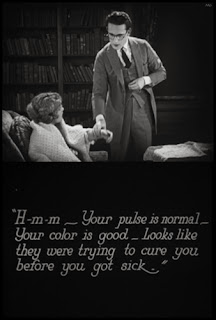 I love the titles - love them, love them! They seem to be made of black velvet and make great Facebook covers. These are all from Dr. Jack, never one of my favorites until I watched it again recently. He is sexier in that one than in any of the others - relaxed, confident, and looking closer to his "real self" because for once he doesn't play a goof. He's a country doctor, a respected member of his community, and looking after one hot dish who isn't really sick to begin with! Does it get any better than playing doctor with Harold?


Posted by Margaret Gunning at 3:19 PM No comments:

“We all carry within us our places of exile, our crimes, and our ravages. But our task is not to unleash them on the world; it is to transform them in ourselves and in others.” - Albert Camus


If anybody's following this blog, they'll be aware that I'm not a big fan of Crimbo Limbo, that dead and empty time between Christmas and New Years.

I mean, what are you supposed to DO during that time? Sit there eating dried-up turkey because somebody's gotta use it up? Take down Christmas ornaments (and what could be more depressing than un-trimming a tree and un-decorating a house?). Realize how fat you are?

It's a time when we're supposed to make "resolutions", which when I was a kid I called "New Years Revolutions", with images of fiery overthrow, exploding bombs, anarchy. But not much exploded, and not much changed.

That sense of a fresh virgin page, of a whole book of virgin pages upon which nothing is yet written, seems to snag a lot of people this time of year. It means we can start all over again. If our lives are lousy, if they're threadbare, if we're overweight or a smoker, if we haven't found "Mr. Right", if we hate our jobs, hate our friends, etc., THIS year it's going to be different. THIS year we'll change ourselves and the world around us, page by virgin page, for 365-1/4 days until the next chance swings around.

I have an old-fashioned desk calendar on my kitchen counter. I am surprised they still make them, in fact. The refills can only be found at Staples. On this calendar I scrawl everything. Doctor's appointments, phone numbers, recipes, complaints, etc. etc. One year I decided to do it differently. I would write everything in pencil, and if I had fulfilled a task at the end of the day, I would erase it.

At the end of a week or so - no, three or four days - no, TWO days or less - I realized I had erased my life. I immediately went back to the ugly, messy scrawl I had to scribble over and cross out again and again.

We DON'T start again - not really - although I am very big on personal transformation (though you'd never know it from the whinyness of some of my blog posts). But it's more of a process, and it happens on its own time, usually when we're not looking, a unicorn appearing in the corner of your eye.

I am a huge fan of Bob Dylan's philosophy-in-a-nutshell, a single song line that speaks volumes about the human struggle: "He not busy being born is busy dying." I wrote a much longer version of this post and decided to stow it (though not delete it) for the time being, as it could very well be misinterpreted. This was the year I had to leave a significant friendship behind, though I am sure I am perceived as the "heavy", the person who abandoned my friend for no reason at all except, perhaps, meanness. Since I know she won't read this, and I won't mention her name (and no one in her town knows me anyway), I feel I can proceed.

When we met, we had an equal commitment to the writing life. She had taken even more writing courses than I had, and was committed to writing a novel. But then the family moved away to a small town. I have every reason to believe she hated this, but would never admit it and said nothing.

After a few stabs at writing for the local paper, her passion dimmed. Her fantasies of escaping the whole thing (searching for apartments on-line by the hour) finally collided with a grim, joyless sense of duty, though she insisted she would never leave her community until her (disabled) husband was dead.

It all culminated in a long, sour, bilious rant that made my head spin. She was clutching hurt to herself, playing the martyr brilliantly. Somehow or other she had learned the subtle art of making everyone around her feel bad. There was also a sense that it was perfectly OK for her to unload all her frustrations on me, thus making herself feel a whole lot better, and me, a lot worse.

I don't know what happened to my friend except that she stuffed her passion into a closet and threw away the key. It's still there hiding under the bed, rotting. When I asked her about her writing recently, she said, "It went away" (an external agent which somehow stood up and left under its own steam).

Abandonment of the urgency of the creative need can turn a person permanently sour. In a way, it's the abandonment of self, and if we do that, there will be hell to pay. "But I don't have time to write." "But I'm afraid to send it out." "But I won't make any money." Yes but, yes but, yes but. (This is exactly the kind of attitude my friend disdains in others: "When are they going to stop making excuses?" But then, she disdains so many things in others.)

I remember staying up until 2:00 a.m. when my children were babies, writing plays and short stories that, of course, went nowhere. But when I moved to a small town in Alberta, I walked into the newspaper office and offered my services as a weekly columnist. They said yes, and I have been publishing my work ever since.

I'm not painting myself as superior. I'm saying that we MUST make our own needs, passions, talents, a priority, or we can end up puking bile on our best friend, who is finally forced to go away. If you take no risks, you take the biggest risk of all - that you will lose yourself, implode. It's a choice, unfortunately, choosing safety over fear. It's hard for me to forget my friend, and it shocks me to think that I just don't like her now, that I don't like what she has become. It isn't a fight - it's profound alienation, and an awful realization that I have been used.

This has become pretty long after all, but I guess I have to post it. My own life hasn't exactly been brave. I haven't been a Valkyrie charging through the heavens or a large-breasted Amazon (except that I order stuff from them a lot). But I am proud of the fact that through all the toils and snares of my life, which included grappling with addiction and dealing with a lot of illness of the type we don't like to talk about, I have kept the writing going. It has had an urgency which I felt I could not ignore or repress. And I TOOK the bloody risks: I have a third novel coming out this year, for God's sake, and can you imagine how - oh, never mind. You can guess.

I don't know what will happen, but I do know I have to stay clear of my former friend. I am not willing to receive the curdled, caustic sludge of abandoned dreams. It is simply wrong for both of us (for how can she ever face herself if I am busy supporting her dysfunction?). I have to move forward into another year - hey, it's nearly 2014, the Year of the Horse, and an "even" year (for I simply hate odd numbers, spiky and asymmetrical). Though if you add up the numerals, you get 7. Never mind, it's lucky for other people for some obscure numerological reason.

The Year of the Horse is my birth year, which makes me a Horse. I have had a mostly-unfulfilled passion for horses my whole life. I simply can't get near a horse now - it's impractical - though those couple of years when I owned a horse as a girl now seem like a slice of Paradise. Long, lazy days riding beside the railroad tracks. I might as well get behind Chinese astrology because it's about as accurate as anything else in predicting the future. And if I do get behind it, it means it's "my year" - finally, my turn - my turn for WHAT, we don't know yet. But I know I will not hide my light under a bushel, nor shove my dreams under the bed.

Posted by Margaret Gunning at 1:07 PM No comments: