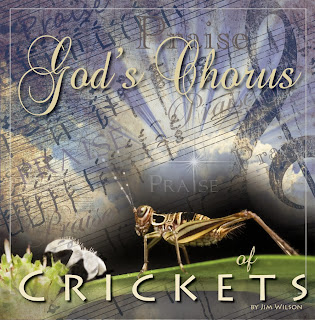 I had a Facebook page for almost a year before I did anything with it. For the most part, it struck me as idiotic. The posts had about as much content and meaning as texting (and what DO people text about anyway: "I'm going to the bathroom now. . . grunt. . . grunt. . ."). It was one big bulletin board of meaningless gossip, interspersed with sappy personal philosophy along the lines of  "Let a smile be your umbrella" and "Always be nice, and others will be nice to you."

But the links are the best, or the worst. 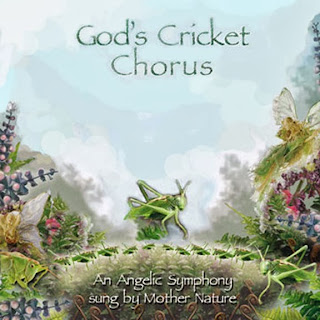 EVERYONE takes the links at face value. No one realizes that many of the pages are satirical, because they don't know what satire is. Or irony. Plus if it's on Facebook, it MUST be true, hey?

The crickets are a case in point. God's Cricket Chorus is a mysterious recording that everyone is raving about, playing it in the basement while stoned, sniffling over it while remembering Rover who died seven years ago, etc. It's transcendent. It's amazing. It's CRICKETS, by Jiminy, slowed way, way down, and it sounds just like a chorus of angels! Here's the ad:


"Want to hear something magical?
Experimental director and playwright, Robert Wilson, caught a hauntingly beautiful piece of music one night, a recording of crickets.
That part is common enough, but then he stretched out the sound as much as one would have to stretch the life of a cricket to equal that of a human, and the result is truly wonderful.”
Clicking that website’s link takes you to Acornavi – Robert-wilson-crickets-audio


No one stopped to ask why, when the cricket sounds were slowed down so much, the pitch was actually higher than the gritchy sound crickets actually make. These were high floating harmonics, likely made with a synthesized choir. BUT HEY. What's the matter with you, anyway, to piss on our party like this? What's the matter that you doubt such beauty, such magical spirituality (because we're spiritual, not religious)?

To put the cherry on the sundae, gravel-voiced blues singer Tom Waits (referred to below as "Tom Waite") endorsed the cricket oratorio as a "swaying choral panorama" that he shared with his dope buddy, Charlie Musselwhite. This was good enough for Baptist churches to begin to use it in their weekly prayer services.

When something is that wildly, stampedingly popular, it's a pretty safe bet that it's bogus. So somebody had to do it: test the method of recording and prove or disprove its authenticity. It wasn't that difficult: the technology is actually there. Just take a recording of crickets, then play it at slower and slower speeds, trying to reproduce the original, magical, spiritual-but-not-religious sounds that had everyone bawling into their cornflakes.

Want to hear it?

It turns out we don't really need that angel chorus to make our hair stand on end. The recording of real crickets is actually pretty freaky in itself, getting stranger and stranger as it is gradually elongated, almost disappearing as it drops below the threshhold of human hearing (though perhaps a whale could hear it).

Look, Mr. Wilson’s original is no doubt relaxing and sounds pretty and I used it to help me sleep once. But it is undoubtedly a human singing, or perhaps a manipulated choir loop. It’s not cool to spread around incorrect info and then call it some miraculous evidence of divine intervention in nature. To me, the sound of the crickets are wondrous enough! C’mon folks, let’s try and be less gullible!

But who wants to hear this? It's no fun. It doesn't emanate the secrets of the cosmos (and what a mystery, that a mere cricket could "know" like that? But aren't we all one, and aren't crickets just as enlightened as the typical stoner on a Saturday night?) People prefer the hoax to the real thing, and pledge themselves to it as solemnly as if they're joining eHarmony. In the face of scientific fact, how could anyone think - ? But they DON'T think, and that's the point. 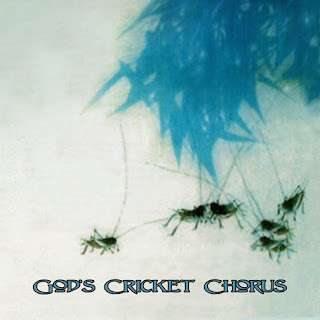 If something like God's Cricket Chorus gets around, if it goes viral or gets on YouTube or the "What's Trending" part of the news (which used to be called the Lighter Side), a zillion people not only watch it/listen to it, they accept it at face value and without question. If YOU don't believe it, you get that turned-off face, that "I smell garbage" or "I see a homeless person and want to get away" face.  You're refusing to join the Holy Church of Oh Wow!

I don't know if you've heard the original, but it's nothing like this. In fact, I think this is infinitely more mysteriously, and genuine into the bargain. You could still smoke up and cry over the dog here, it wouldn't make a big difference, but I guarantee you'll get a big kick out of the very last track. 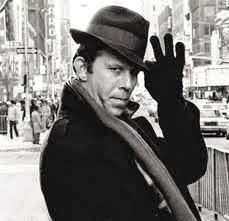 (P. S. As awareness of this "alternate" recording spreads, many have gone on record to say things like, "OK, so the God version isn't really crickets, but that doesn't take anything away from how beautiful and transcendent it is." Some doubt has also arisen as to whether Tom Waite (sic) was clean and sober when he made that claim about a pulling a leprechaun out of his pocket.  As P. T. Barnum liked to say, there's one born every minute.)

Posted by Margaret Gunning at 2:10 PM No comments: