Whatever became of the wildwood flower?


In one of his most compelling songs, Gates of Eden, Bob Dylan wrote: "At dawn my lover comes to me/and/tells me of her dreams/with no attempt to shovel the glimpse/into the ditch of what each one means."

Not at dawn, but when I first get up, I find my mate sitting in his Lazy Boy reading the paper, listening to the radio and drinking coffee. I add one more activity to his multiple roster: listening to my dreams.

Not every morning, but just when I have had an unusually vivid one, one that stays with me for a while. This one is already dissolving like frost into the winter air. 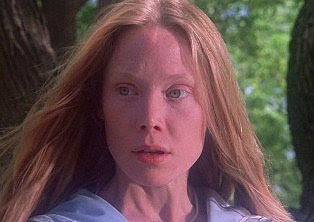 I was about 20 years old. I wasn't "I", but this slender, pale wildwood flower of a girl, as if I were barefoot except I couldn't tell if I was barefoot or not. I was wearing a dress like Pippa Middleton's at Kate and Wills's wedding, very close-fitting white satin. My hair was streaming down my back, long and brown and straight and completely unstyled. (I have never looked even remotely like that in my life.) Anyway, I was in a church and was about to be married. I didn't recognize the church at all, or any of the people, though my mother was supposed to be there and I even had dealings with her but didn't know it, didn't recognize her. I had the feeling she might have been one of the people who tried to fuss with my hair. 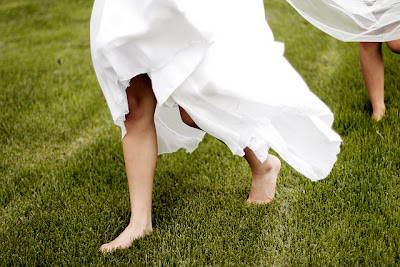 At one point I even asked someone if the sides shouldn't be pulled up at the back in a ribbon or a rose, and someone else said, "You mean up? Please don't put it up, it looks so pretty that way," but I worried it would look a little too informal or even make me look uneducated and "backwoods". I only recognized one guest, my former English professor from 1991 who kept bustling around very urgently in a suit and tie, as if he was supposed to be doing something. The minister (a youngish guy with a lot of tousled brown hair, whom I had never seen before) kept getting up and blabbing to the congregation about things that I don't remember now. 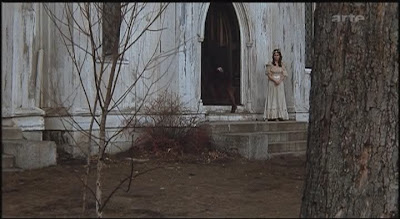 At one point a woman ripped open buttons on the neckline of my dress (which went all the way up to my chin), leaving the front sprung wide open, and I thought of the man's collar in that Bugs Bunny cartoon, the tenor, when he couldn't stop singing. Then she said, "Ahhh, that looks better," though I worried it didn't look good at all and would look unkempt and out of control, but I couldn't check it because there were no mirrors in the place at all. All the way through this dream I kept hearing the music on this video, which I recently heard on an old Star Trek, a favorite episode called Shore Leave in which the crew of the Enterprise was on a planet where all your thoughts immediately materialized and became real. 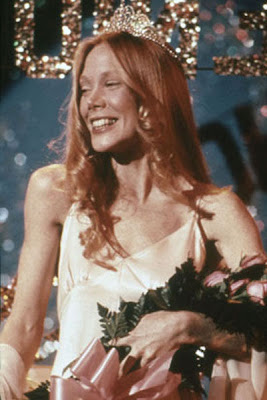 There were all sorts of things, a knight, Don Juan, a tiger, Finnegan (asshole from Kirk's Academy days), but suddenly there appears Kirk's old girlfriend Ruth, dressed like an Athenian goddess and so heavily made up (like all Star Trek babes, probably for the grainy b & w TVs of the time) she could barely keep her eyes open. She looked like his date for the Academy grad party or something. Yes, this music came on and from the beginning I loved it, not for its sweetness but for the almost agonizing dissonance in the strings that underlay the innocent flute melody. Anyway, as I was preparing to get married, three girls I vaguely remembered from high school (actually, I only remembered one of them, Janet, who always beat the hell out of me in grades and getting awards) pulled up chairs at the front of the congregation and sat in a sort of triangle (not facing everyone) and began to discuss contract work and contractual obligations and how it was important to know exactly what you were signing. 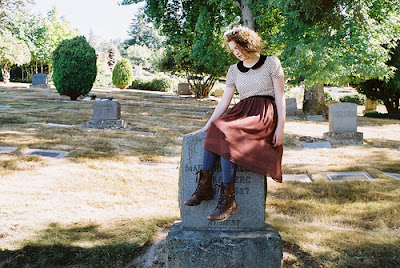 At this point I stretched out between two chairs in my Pippa Middleton white satin wedding gown and took a nap, thinking I would look more refreshed for the ceremony. The three girls (only about 15) were giving a sort of seminar and no one thought it was unusual. Then I began to worry about the vows, which I had had nothing to do with. I was afraid the minister, who seemed somewhat fundamentalist, would say "love, honor and obey", and I didn't want the "obey" in there, I wanted "love, honor and cherish", but didn't know how to change this because I seemed to have absolutely no control over anything that was happening that day. In fact I seemed to be the least important person in the place, almost as if I were invisible or a walking ghost. 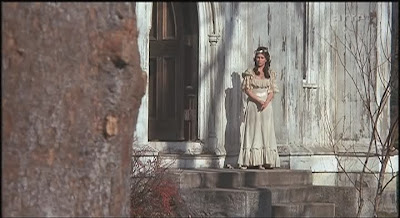 It was not until after I woke up and analyzed this dream that I realized the strangest detail of all: there was NO GROOM - no one, nothing! He was just a cipher, a non-entity. I did not even think about this, did not wonder about it, nor did anyone else. It did not matter at all who I married, in fact it was clear I was not marrying anyone. Hmmm, what else? In a side room, before the ceremony started, a few people I sort of knew from my old church were watching a video on a large flat-screen TV, a movie featuring dangerous mountain climbing. I watched it for a few minutes, then realized it was getting close to the time of the ceremony, so I said, "Will you pause it for me, please?", so I could watch the rest of the movie after I got married. 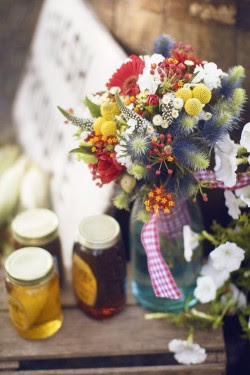 That flute music appears throughout the classic Trek series, whenever a particularly fetching young woman appears. It's almost a "fetching young woman" signal. The most poignant isn't the one about Ruth but the episode with Jill Ireland, long dead from breast cancer, who falls agonizingly in love with Spock on that planet with the spores that make you fatuously happy. At the end of it she doesn't just shed a tear, she really weeps, with red face and running nose, and Spock speaks to her as tenderly as a Vulcan can.


Watching these Treks again, they're better than the heartless parodies, though of course most of it is standard '60s action/adventure, and Sulu is particularly amusing in his ongoing romantic advances to Uhura (implying it's more acceptable for a gay Japanese man to romance a black woman). Kirk isn't as bad as you remember. Really, he's not. He only overemotes about 10% of the time. This is not the place for Shakespearean soliloquys (though one of these times I'm going to post his Hamlet from one of the daytime shows of the '60s), so he pretty much sticks to the action/adventure hero mode. But as the series wears on he gains levels of humanity, transcending such hokey lines as "No blah, blah, blah!" 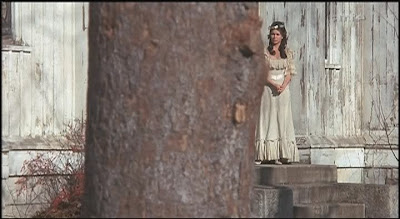 The dynamic between Bones and Spock is brilliant, unique to television. DeForest Kelley has some real moments, especially inThe City on the Edge of Forever, in which he runs around crazed but is still compelling and completely believable. I can see how and why this quirky little series somehow spawned a dynasty. But what does that haunting flute music have to do with getting married to an invisible groom? And if that pale wildwood flower really is me, whatever happened to her? 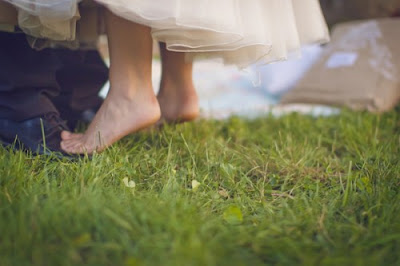 The Invention of the Saxophone: take two

Blogger's note. God knows how many years ago, I was standing around in a book store leafing through a book of poems by Billy Collins. I found this amazing poem about saxophones, almost forgot it, then tried years later to find it on the net. No sign of it. As so often happens, I had to go back years later to find it, and by then I had done the unthinkable: written my own poem, which likely has unconscious echoes of the Collins poem. Unconscious, not because I was unconscious when I wrote it, but because I only read the Collins poem once in haste before the store clerk glared me out of the place. Do I need to tell you that the Collins' poem makes me want to stop writing forever?

The Invention of the Saxophone by Billy Collins

It was Adolph Sax, remember,
not Saxo Grammaticus, who gets the ovation.
And by the time he had brought all the components
together-- the serpentine shape, the single reed,
the fit of the fingers,
the upward tilt of the golden bell--
it was already 1842, and one gets the feeling
it was also very late at night.

summoning the insomniacs (who were up
waiting for the invention of jazz) to their windows,
but leaving the sleepers undisturbed,
even deepening and warming the waters of their dreams.

For this is not the valved instrument of waking,
more the smoky voice of longing and loss,
the porpoise cry of the subconscious.
No one would ever think of blowing reveille
on a tenor without irony.
The men would only lie in their metal bunks,
fingers twined behind their heads,
afloat on pools of memory and desire.

And when the time has come to rouse the dead,
you will not see Gabriel clipping an alto
around his numinous neck.
An angel playing the world's last song
on a glistening saxophone might be enough
to lift them back into the light of earth,
but really no farther.

Once resurrected, they would only lie down
in the long cemetary grass
or lean alone against a lugubrious yew
and let the music do the ascending--
curling snakes charmed from their baskets--
while they wait for the shrill trumpet solo,
that will blow them all to kingdom come 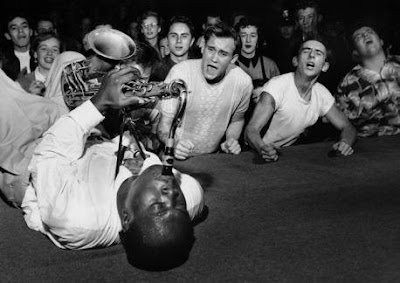 AFTER SEARCHING FRUITLESSLY FOR A POEM BY BILLY COLLINS CALLED THE INVENTION OF THE SAXOPHONE, THE AUTHOR TAKES IT UPON HERSELF TO WRITE ONE OF HER OWN

but i think it was a good thing

for it’s great to look at,
with fat keys like frog eyes
and a big bell like royal jelly
you could keep flowers in there if you wanted to,
extra socks
or even a clock 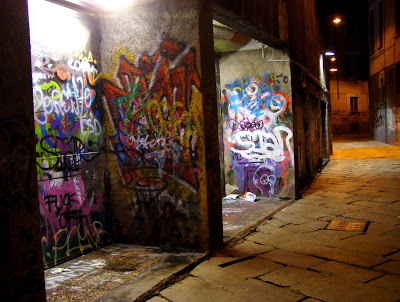 There is no
morning saxophone

this is a sound that
pulls the shades down

Bird flew into a pane
of glass and was
smashed

but how could you blow this thing
halfway

i never much cared for
saxophones myself
until i heard one blown correctly at last
jazz is a genre i will never understand
but perhaps that’s good
for like the priesthood, one must enter into it

Posted by Margaret Gunning at 11:22 AM No comments:

Coolest Telus ad EVER: and it makes great gifs!

http://members.shaw.ca/margaret_gunning/betterthanlife.htm
Posted by Margaret Gunning at 9:45 AM No comments: