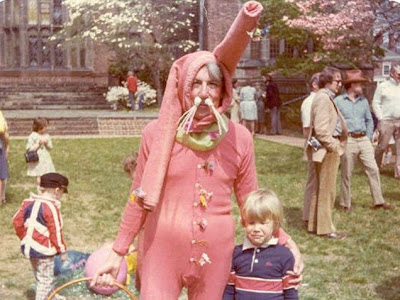 It wouldn't be Easter without a few of these. I've found some that look suspiciously doctored, so I won't use them. What stands out is the terror and dismay on the faces of the children. Why? Why would anyone be afraid of an old man in long pink underwear and erectile ears putting his arm around you, when you KNOW you're not supposed to talk to strangers? Why would you take candy from them, when Mom and Dad have jackhammered it into your little head that you are NOT supposed to do that, ever? I am sure this is why small children scream and cry at the Easter Bunny and Santa and all those other creepy characters, until custom and convention slowly wear down their natural instinct to survive. 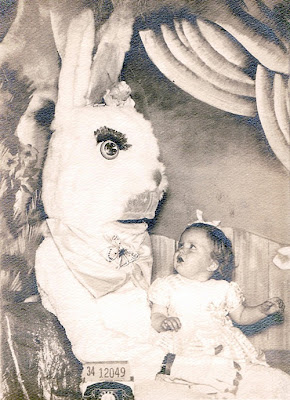 Why must Easter bunnies look like Fascist dictators? Why must their heads be larger than their bodies? Would this scare YOU? 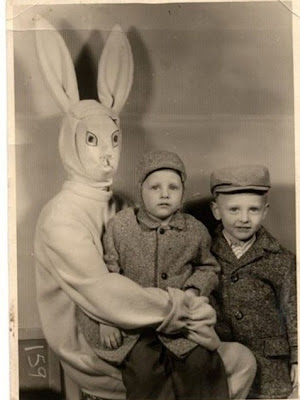 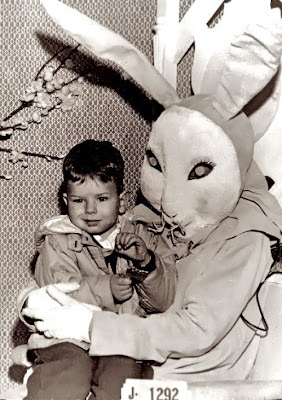 The Space Alien bunny is a genre unto itself. They're really here to harvest our children. 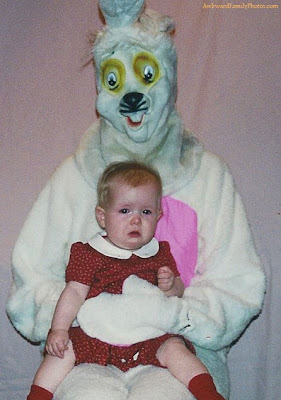 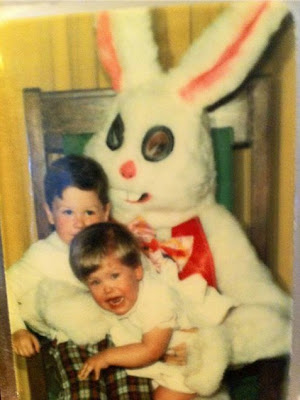 I'd like to know who would sit down and design a costume like this. There are apparently no holes for oxygen, so let's hope the guy suffocated. 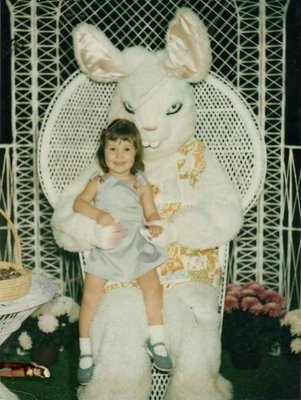 This is my personal favorite. Don't be fooled by the frightened smile on the little girl's face. She's just trying to get it over with as soon as possible. 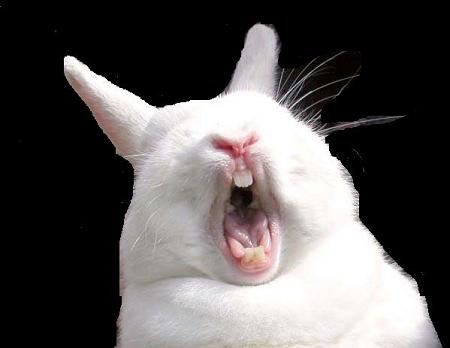 Posted by Margaret Gunning at 12:06 PM No comments:

Whatever happened to the Rich Egg? 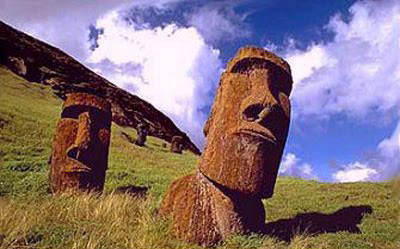 Easter morning, and I'm wondering whatever happened to the Magic Treat of my childhood.

We had the usual stuff in our messy Easter baskets, stuffed in with that shredded cellophane that gets into everything, and I seem to remember a lot of jellybeans and a large, waxen egg with a white centre. Nobody liked these, but who were we to argue with the Easter bunny?

I would go along with anything when I was a kid, including the idea of a Harvey-esque full-sized rabbit hopping all over the universe to distribute candy and toys. But mostly candy. The piece de resistance (never mind if I spelled that right, it's Easter) was the Laura Secord egg, usually called by us kids the "rich egg" because if you had more than a small bite of it at a time, you'd gag on the sweetness. It had a fairly thick milk chocolate shell, a fondant-y centre and a yolky-looking middle, which we assumed was made of entirely dfferent material. Yolk candy.

Though I remember it as being about the size of my fist, it was a child's fist. But still pretty big.

Lots of people have fond, even mooshy memories of the Laura Secord Easter Egg, which apparently is still available in Canada's Far East. They remember Mammy or Aunt Dora or somebody-or-other giving them the rich egg on Easter morning, the ritual opening of the box and removal of the paper grass, the malty sweet smell of the chocolate. Memories like these are powerful stuff. But though the egg is still manufactured, like so many things, it has changed. On the internet I found a taste test of the egg as it stands today, and it fell rather short, getting something like a 6 out of 10. 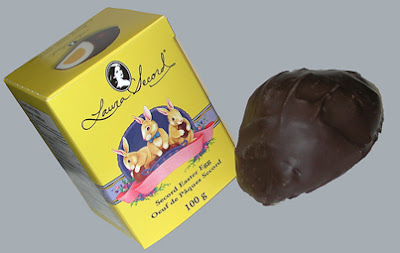 But has the egg changed, or have we? Perhaps both. Today, I am sure people would not cut small slices off the egg and eat maybe one slice per day until the thing was gone (carefully keeping the leftovers in the refrigerator). They'd have at it and eat the whole thing in one go, if the 400-pound young woman we saw in the lineup at at McDonalds yesterday is any indication.

People wouldn't know what to do with a rich egg if it bit them.

I found several recipes for a replica of the Secord egg which are no doubt improvements on the goopy new version (which probably resembles the blandly sweet Cadbury cream egg). I like this one because it purports to be "healthy". Well, there are 22 servings here, so unless you eat them all at once (which probably most people would, in this age of dangerous gluttony and overconsumption - and hey, whatever happened to the concept of gluttony as a "deadly sin"? Nobody even uses the word any more. Call Marlon Brando.) I'll just let that thought dangle. It's Easter.

(Before this "healthy recipe" I will display an example of a homemade egg that is probably excruciatingly good, way better than our "rich egg" ever was. This probably takes approximately one million  hours to make.) 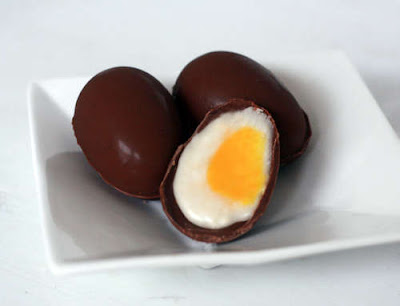