There is always one more. . . doll 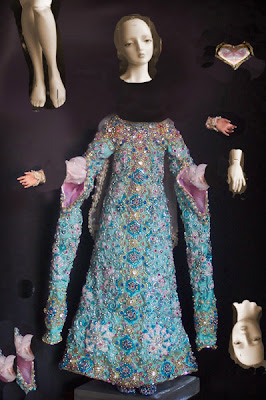 I don't know what gets into me, I really don't. I can't leave it alone, and I never could.

A few posts ago I was talking about fan art, which I've never done before, mainly because I have no artistic sensibilities whatsoever and can't draw or paint to save my life. Once during a manic phase, I did a lot of abstract painting and was convinced it was REALLY GOOD and went around scanning it and sending it to everyone. Unfortunately, it was shit. I had no idea why everyone seemed so embarrassed.

I don't know how artists do it, except through true talent and determination.

I can't leave it alone. These dolls, these alabaster time-travellers created by the mysterious genius Marina Bychkova (a Vancouver girl, I'm happy to say) pull something out of me, something equally strange. 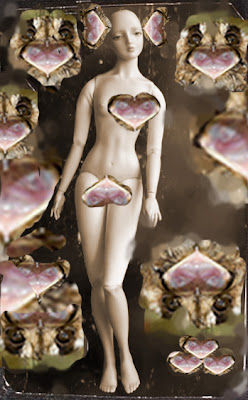 I want to unjoint them and take them apart and see how they work, or at least dress and undress them. Why? What's the matter with me? I hated dolls as a little girl.

I didn't even have any, except an execrable Debbie doll with a big head and permed black hair like my mother's, and an even worse one called Miss Debutante. Does the average eight-year-old know or care what a "debutante" is? It's a strange term at the best of times, and like "chatelaine" it has no male equivalent. I used to call her "Miss De-BUT-ton-ty", when I called her anything at all.

I did mummify my Barbie, and got some strange looks for it, even from my schizophrenic brother Arthur who seemed to be from some other planet. What can I say, I loved mummies and hated Barbie and it seemed like a good solution. 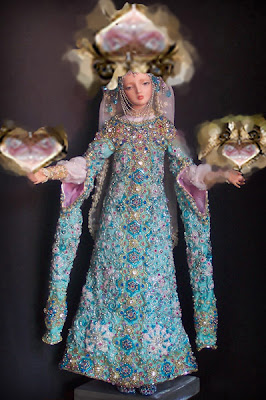 I can't play with dolls even now, I can't afford one as good as these, and feel a bit silly prowling around doll shows where people just hoard them. So this is my only way of playing.

I have to reveal a secret: while I played with images today, I worried about a medical test I'm having in a week. I don't feel well and I haven't for some time, though as usual nobody has a clue about it because "you seem fine to me". When you've hidden depression and other kinds of wretched imbalance for nearly 60 years, you get awfully good at it.

This seems to be "physical", meaning "not my fault" and "not something I'm just making up to get attention that I could snap out of any time I wanted to, except I don't want to". It's weird, because part of me hopes there's something wrong, or at least something they can locate, so it won't be one of those vague situations where you KNOW there is something wrong but no one in the medical community will acknowledge it.

It seems a bit idiotic to say, "Gee, I sure hope they find something wrong." 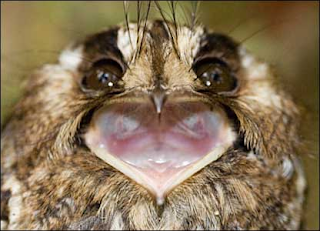 I have another secret, and now I will reveal it. I wanted to use one of those hideous birds by Hieronymus Bosch in my "fan art", but discovered it really wasn't do-able, any more than my equally bright idea to make my own Russian nesting dolls. But I did find this, some sort of hawk making that screaming noise they do. What struck me is that its mouth was a perfect mother-of-pearl-looking heart, so I used that as a basis for my fan art, or desecrations, or whatever they are.

It just worked so perfectly.

I have noticed that if you put EXTREMELY RARE in a title, everyone reads the post. Or something.

This ad is, I will admit, extremely bizarre, with the "p-p-p-p-protein" and the dog chasing the three cats into a barrel (with an obvious break to get the freaking cats out of there).

Cat food ads have always been way stupider than dog food ads. We had Morris, who used to complain endlessly in that smarmy voice. (In spite of his addiction to Nine Lives, he died.) We had "chow-chow-chow" and that weird running-the-film-backwards dance that no cat would do if they were starving to death. And we had the incomparable telephone-proficient Baxter ("Don't answer it, Frank"), whom I thought was lost forever until I dug up a couple of the commercials on an advertising site.

Probably the best- known was the Meow Mix jingle, with the original subtitles reading, "I want chicken, I want liver, Meow Mix, Meow Mix, please deliver." There were infinite varieties on this, with the words gradually making less and less sense ("I want lightly-grilled sea bass, I want roast turkey with razzleberry dressing," etc.).  My all-time fave, which I think I already posted at some point, was the "Close Encounters" Meow Mix commercial of the mid-'80s: a cat is pictured gazing heavenwards and meows four times in the familiar Meow Mix "frequency". A huge spaceship appears and echoes the meows with "BOM BOM BOM BOM". All that's missing is Richard Dreyfuss digging up shrubs and having a nervous breakdown from sheer intensity.

I'm glad to find these things again, because they're fun, and my grandkids whoop and scream over them. They don't make ads like that any more, with those stupid cats, or rather, those stupid advertising copywriters. Paging Freddy Rumsen!