Dead monk in the middle of the road: the ultimate automaton

From Wikipedia, under the entry of Automata:

In 1562, the heir to the throne of Spain sustained a serious head wound that caused him fever and blindness. His father, the king, thought all was lost, until the heir was reportedly cured by the miraculous corpse of a Spanish monk that had been dead for 100 years.In his desperation, the king had allowed the monk's mummified body to be placed in bed with his sick son and he was so thankful when﻿ this dubious medical treatment actually worked that he commissioned a moving replica of the dead monk.


You see? You see how wrong I was about automatons (or automata, if you want to get technical about it - just don't say automaTRON, as too many people on YouTube videos did - collectors!!). I thought they were a Victorian invention, maybe because of that scene in A Christmas Carol where Tiny Tim is staring into the store window as they take away the wooden boat he covets. But soon he is beaming again with his crooked English teeth, because of the jouncing clown that leers and laughs at him, which I just ASSUMED was an automaton. 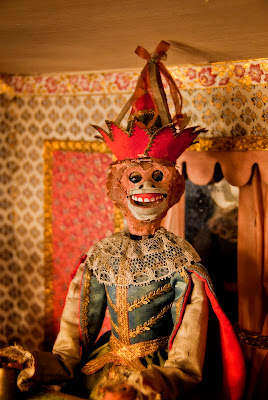 Which maybe it was, but it was a pretty shitty one. If this monk-on-wheels (currently moldering away in the Smithsonian) is indeed dated back to 1562, there's more going on here than I thought. For one thing, I must have seriously underestimated human technology. (BTW, there's no sound on this video, probably to disguise the creaks, groans, whirrs and thuds these creepy homunculi produce).

I can't begin to figure out how these things move, and when I see the inner workings of them they look like giant pocket watches ticking away. I don't see how else they could have stayed in motion, though, like a pocket watch, I assume they would have to be wound at intervals. 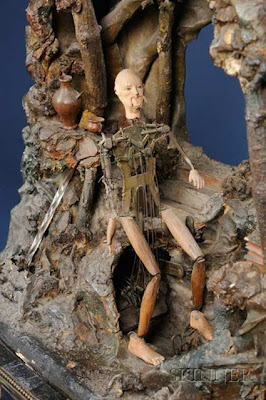 My readings about automata are fascinating, if pretty strange. The medieval monk-y business is nothing compared to this far-fetched Biblical tale of automatiana:

According to Jewish legend, Solomon used his wisdom to design a throne with mechanical animals which hailed him as king when he ascended it; upon sitting down an eagle would place a crown upon his head, and a dove would bring him a Torah scroll. It's also said that when King Solomon stepped upon the throne, a mechanism was set in motion. As soon as he stepped upon the first step, a golden ox and a golden lion each stretched out one foot to support him and help him rise to the next step. On each side, the animals helped the King up until he was comfortably seated upon the throne. 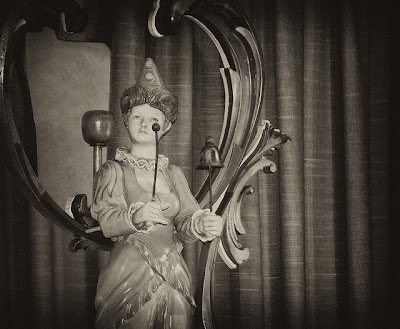 I don't see how this could have happened, unless a time-traveller (perhaps Dr. Sheldon Cooper of The Big Bang Theory) went back and built the thing for Solomon. I also wonder about that "legend" bit: legend usually means "something that maybe sort of should be true because we want it to be, but probably isn't".

But this one takes the cake, and I am sure was written as a form of satire, perhaps to take a swipe at people's wide-eyed awe when watching these things. I can imagine them exclaiming about how lifelike they were, even if they were about as animated as that monk's mummified corpse. 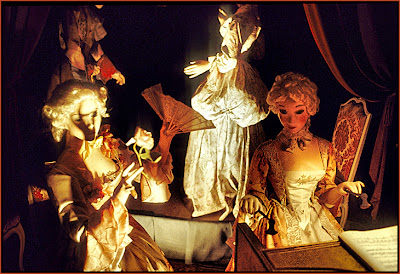 In ancient China, a curious account of automata is found in the Lie Zi text, written in the 3rd century BC. Within it there is a description of a much earlier encounter between King Mu of Zhou (1023-957 BC) and a mechanical engineer known as Yan Shi, an 'artificer'. The latter proudly presented the king with a life-size, human-shaped figure of his mechanical handiwork (Wade-Giles spelling):


The king stared at the figure in astonishment. It walked with rapid strides, moving its head up and down, so that anyone would have taken it for a live human being. The artificer touched its chin, and it began singing, perfectly in tune. He touched its hand, and it began posturing, keeping perfect time...As the performance was drawing to an end, the robot winked its eye and made advances to the ladies in attendance, whereupon the king became incensed and would have had Yen Shih [Yan Shi] executed on the spot had not the latter, in mortal fear, instantly taken the robot to pieces to let him see what it really was. And, indeed, it turned out to be only a construction of leather, wood, glue and lacquer, variously coloured white, black, red and blue. Examining it closely, the king found all the internal organs complete—liver, gall, heart, lungs, spleen, kidneys, stomach and intestines; and over these again, muscles, bones and limbs with their joints, skin, teeth and hair, all of them artificial...The king tried the effect of taking away the heart, and found that the mouth could no longer speak; he took away the liver and the eyes could no longer see; he took away the kidneys and the legs lost their power of locomotion. The king was delighted.


Could Walking Baby Alive have done any better?

(I've barely looked at this site, but it looks promising, though I have no idea what it has to do with Johnny Depp. Except that maybe he's an automaton.)
Posted by Margaret Gunning at 12:46 PM 2 comments:

It's Nancy (but where's Sluggo?)


Once you start watching these, you're a goner. Nancy is particularly "lifelike", meaning she isn't lifelike at all and scares the Jesus out of you.
Posted by Margaret Gunning at 11:15 AM No comments:


This strange embalmed-looking automaton was once a form of Victorian entertainment, a technological marvel of its time. The sounds she makes are the best part.
Posted by Margaret Gunning at 11:14 AM No comments:


What makes these hideously fascinating figures even more fascinating is that you just keep finding them. One YouTube video leads to twenty more. These were marvels of high technology during the Victorian-Edwardian era and were driven by a hand-cranked clockwork mechanism. I tried to find a quite long video shot by a tourist which featured a fascinating museum in Switzerland, mostly a collection of self-playing musical instruments. Can't find it now, but maybe it lingers somewhere in a backwash of YouTube-opia.

I suppose people must collect these at great price, or else they appear only in museums and are seldom - what, played? Cranked? What ARE these things, anyway, and why do I have nightmares about them? The sounds they make are the worst, the creakings and bangings and muffled thuds.

I mean, clowns are bad enough, aren't they, but half a clown made out of wires, rolling some sort of ball and sticking his tongue out at us, is the stuff of Tim Burton movies.
Posted by Margaret Gunning at 11:13 AM No comments: