WHERE did this goddamn thing come from? 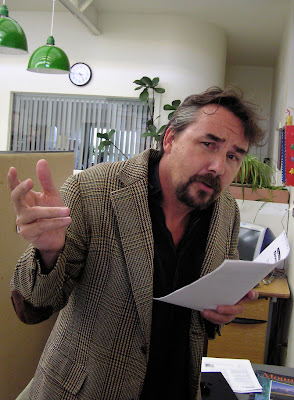 Good morning, children of the universe! It's time for a Psychology Test.

Do any of you remember this from a Long Time Ago? Did maybe your pretentious sister, home from university and spouting her usual boring neurotic bumph, start gassing on and on about her answers to this test and her friends' answers to this test? as if they had some sort of Great Existential Significance and/or revealed something Great and Existential about themselves? Did the whole thing strike you as an exercise in total narcissism?

First picture yourself in a . Describe the forest.

Its ah, got treesn' stuffinnit? And I'm like, I'm really scared cuz I'm like, lost or something or maybe it's an animal?

Next you come upon a KEY. Describe the key and what you do with it (pick it up, leave it there, look at it, etc.).


Look at it first cuz I'm like, I like them cuz they're cute, specially those little ones?

Uh I think I'll leave it there cuz it's a donkey? and I'm like not strong enough to carry it. 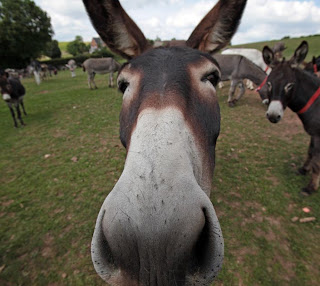 Next you come upon a BEAR. Describe the bear and what you do in reaction to it.

Bears are cute and stuff, and they wave their like paws? I wave back at them. Some of them are pandas, way cute like a stuffy. But don't walk backwards when you see them, you should run fast instead.

Next you come upon a CUP. Describe the cup and what you do with it.

Next you come upon a HOUSE. Describe the house and what you do with it. 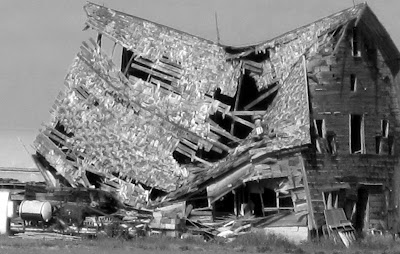 I'm like scared of this house because it's falling down? So I can't go inside of it.


Next you come upon a body of WATER. Describe the body of water and what you do with it.


Am I spozed to do something with a body of water cuz I don't know what. Pull the plug or something.

Next you come upon a WALL. Describe the wall. If you can see it, describe what is 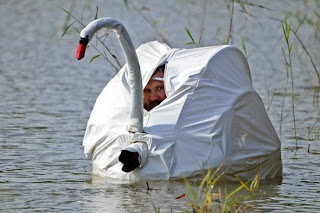 Is it lunch time yet?

What It All Means:

The represents YOUR LIFE.

The WALL represents DEATH and

BEYOND THE WALL represents the
AFTERLIFE.

Most people who see a video like this one have an instinctive "ewwwwww" reaction: "oh, that's creepy". There's something about an object that's described as "lifelike" - those embalmed-looking Madame Tussaud's waxwork figures, or the Victorian post-mortem "subjects" photographed sitting up with sculpted smiles  - that makes most of us feel a sinkhole open up in the pit of the abdomen. 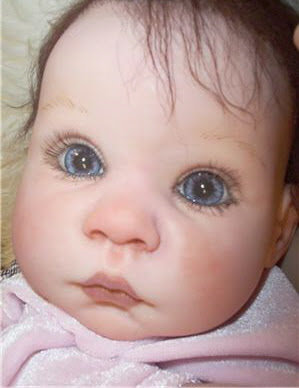 These sweet little things are called Reborn dolls, a creepy name if there ever was one, evoking both recycling and born-again evangelism. For many women, mostly older women, they call forth feelings that we normally associate with a kicking, squalling, pooping, drooling, red-faced little spud that causes endless trouble because it requires constant care.

But if you "adopt" one of these (and the cost can be well into the thousands), the baby is surprisingly low-maintenance, or perhaps even NO-maintenance, for it doesn't cry or require changing or bathing or cuddling. No, the requirement for cuddling rests with the cuddler, who must be trying to fill some sort of inner emotional abyss in constructing and buying/selling these things (for things they are, complete with crusty little rashes and runny noses). 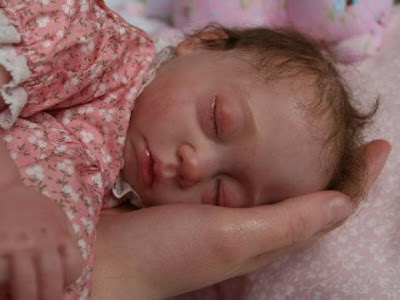 The obsession with collecting is beginning to spread into a mania for actually making these things, and Reborn kits are surprisingly easy to obtain on the internet. The woman in the video, who with her stony face and turned-down mouth looks extremely unhappy, turns out a complete Reborn doll per day - but, even more disturbingly, she doesn't sell them or even give them away. Her house has rooms packed full of them, 1800 in all, to the point that I don't see how she has time to rock and nurture them all. Though she insists she was only seeking "inspiration", the local maternity ward told her to stay away because she was giving patients the creeps. 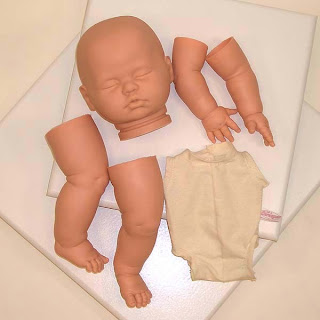 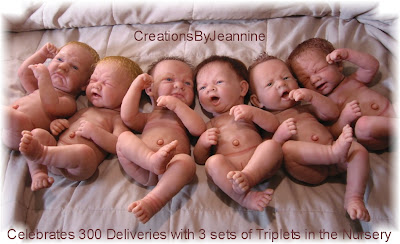 The more I got into this subject, the more I was reminded of something infinitely more horrifying. Awhile ago I saw one of those semi-sensationalistic documentaries about World War II on the History Channel. I confess right now that I'm obsessed with that war and with the Nazis and their twisted ideology. Probably the most pathological idea they ever had was to breed babies.


The Lebensborn project was a means of producing a master race of full-blooded Aryans, many of them fathered by members of the SS and handed over by their young mothers as a duty to the Fatherland. In fact, surrendering a baby in this way was seen as an honor, with your child guaranteed the best possible education in the unassailable truths of Nazism. They'd learn that stiff-armed salute before they were two. 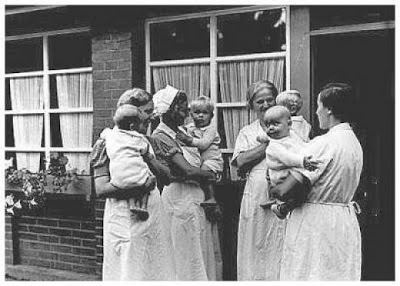 What gave me the shivers - and I haven't been able to find a picture or clip of this - was a very brief shot of babies - dozens of babies - scores of babies - some with diapers, many without. They lay kicking and squalling, squashed together on the flat surface of a giant table, with a few nurses moving around among them, maybe checking to see if they were still alive. But that's not the worst. In the foreground more babies were coming in, shoulder-to-shoulder and knee-to-knee. . . on a conveyor belt.

These babies were "product", something systematically mass-produced to carry on the horrors of the Reich. My personal view is that the Nazis feared that these children might feel something unacceptable - pangs of conscience, perhaps  - if they weren't indoctrinated  from their very first breath. 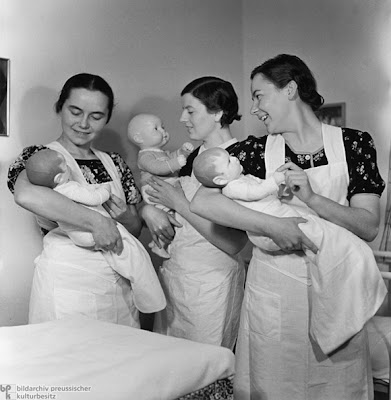 When I found these photos, they made my scalp prickle because everything seems so wholesome, so "normal". No doubt much of this normalcy was fabricated for the camera to reassure people that their lost babies were being properly cared for. The shot of nurses cuddling life-sized dolls made my hair stand on end. What is this bizarre photo all about?  Did they really think they could perfect their childrearing skills on an inanimate object?


I'm not for one minute saying these dollmaking women are Nazis, but they sure are strange. They're turning out what amounts to "product": inert replicas of babies, blobs of primal instinct made of latex and fabric, monuments to departed children or grandchildren, or maybe just something to fill an aching space inside. 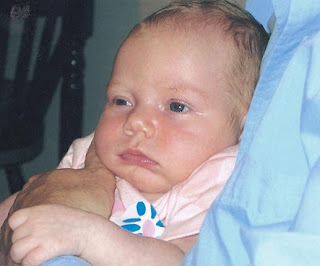 I've felt it in unguarded moments, usually at the supermarket checkout line: a sudden pang when I see a newborn baby. Not only did my own children's infancy hurtle by in a blur, my grandchildren are growing up at an appalling rate, like those old Wonder Bread ads where the kid shoots up right before your eyes. I was in the delivery room when Caitlin was born, a compact little football swaddled in a green towel with almost unnaturally-bright, almond-shaped eyes. And now she's nearly nine. NINE - ye gods, I remember being nine! That was the year Kennedy was shot. The Beatles first appeared on the Ed Sullivan Show on my tenth birthday. So she's already in that phase of cynicism that I remember so well, sometimes causing my older (much older) siblings to cry out, "Oh, stop!" 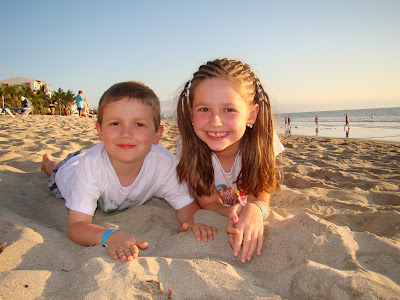 I'm not in a rush to get one of these Reborn things, carefully weighted in head and body so that it "handles" just like a real baby. I'd rather get a puppy or a kitten, something that is at least alive. As a matter of fact, being very tired of shovelling shit and listening to earsplitting shrieks, I don't think I'll get another bird when Jasper dies. Didn't I do enough cleaning up shit when I looked after real babies? 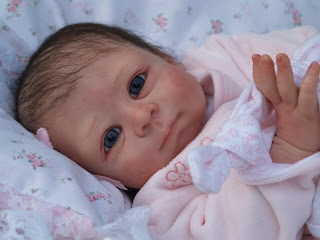 But this is the perfect creation, the shitless, screamless baby, a baby that never changes, as if it has been dipped in wax or embedded in plexiglass. Frozen in time, it's always there as a comfort. The only problem is, it gives me the shivering creeps. 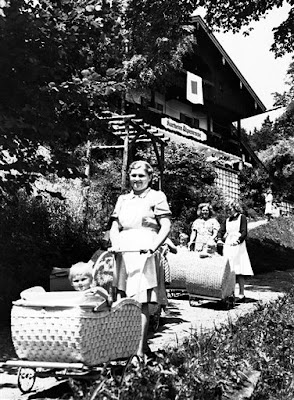 SPOT THE REAL BABY! One of these photos is a real baby (not counting the Caitlin newborn shot). Can you guess which one?