The worst Polish joke ever!

Backstory? OK. Lots of us (of a certain age) remember the kind of late-night TV that gave rise to satires like Monster Chiller Horror Theatre on SCTV.  But in the '60s, it wasn't satire: there really were late-night shows like that, with hosts much funnier than the lame movies they hosted.

Living in Chatham, which is near Windsor, which is near Detroit, which is sort-of-near Cleveland, we could at least get scratchy versions of Cleveland radio (WKYC, eleven-double-oh!), and eventually, these guys. Hoolihan and Big Chuck had rattled around in the broadcasting biz for years, doing this n' that, the weather, filling in for sick people. By accident they started doing comedy bits together, and somehow the chemistry was right for some very lame, very funny late night TV. So they kept at it for years and years. Big Chuck went on even longer after Hoolihan left, taking up with a dwarf, but that is most definitely another story.


Every so often I'd be allowed to sleep on the pull-out bed in the den and stay up as late as I wanted, and when that happened, I always watched these guys.
It was plain that they stole shamelessly from Ernie Kovacs (and don't get me started on Kovacs, because I periodically begin to write about him and can't stop: at one point I really, really, really wanted to write a novel about him but couldn't because he doesn't seem to be around any more to be "tapped": did too many people steal from him, I wonder?). Their collapsing cardboard sets and the props that fell to pieces in their hands weren't much better than the paper-and-black-marker that Kovacs was allowed in his meagre budget. Hoolihan and Big Chuck weren't geniuses like Kovacs, but they had a blast doing this show and communicated their laugh-your-ass-off style to a very loyal audience. They were wacky and insane and satirized the Polish culture in and around Cleveland (such as Parma: I remember a long-running soap opera called Parma Place) in a way you'd never get away with now.


I stumbled on this one - don't know if I actually saw it or not, maybe not coz this skit came on a few years after we moved away and I couldn't get Cleveland TV any more. (Or anything else.) But it's one of their best, or, at least, it's pretty good, or, um, OK or something, pretty cheesy actually, but funny as hell. 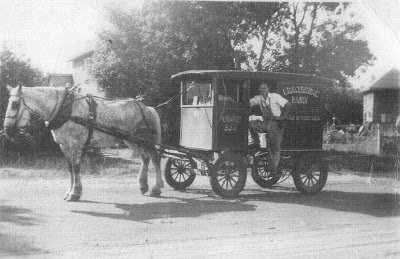 I'm not a million years old, but in many ways I might as well be.

I live in an era of tablets, social networks and i-this-and-i-that, and I have (very) imperfectly adapted. But I grew up in something else. 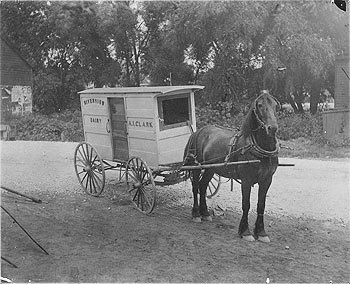 This was the kind of thing I heard, and saw, when I was a child. This is how we got our milk every day. Yes, this way.

Cloppa, cloppa, cloppa down the street every morning, very early. Snorting and whinnying. It was a little girl's paradise. Every morning I'd rush out the front door with a carrot. 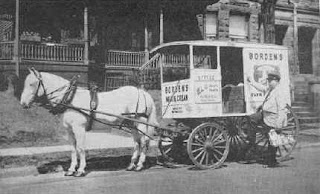 Oh that smell, that I love to this day, the smell of horses!

I used to try to tell my children about this, and they rolled their eyes and said I was lying. Surely horse-drawn wagons ended some time in the 1890s. 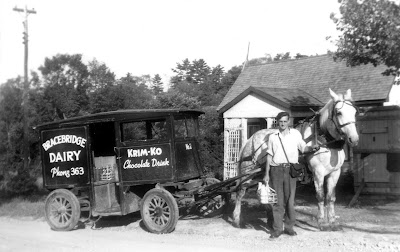 But they didn't. They delivered milk, not to mention fruits and vegetables, well into the 1960s.

This is a wagon from Bracebridge Dairy. All these wagons have a three-digit phone number on them, incomprehensible. I remember the name Bracebridge - somewhere in Northern Ontario, I think (a name I haven't heard in so long, like the old street names in Chatham, that it gives me an odd sort of thrill). We had Silverwood Dairies, mostly in southern Ontario but also, I believe, in parts of Alberta out west. 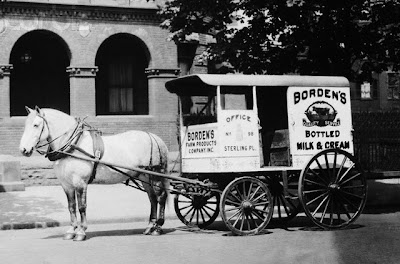 I just thought of something! My first real job was in the purchasing department of Silverwood Dairies in London, Ontario. My job had nothing to do with the milk, but I do remember filling out endless requisition forms for various ingredients. I was also on the taste panel for new products, one of which was artificial ham. 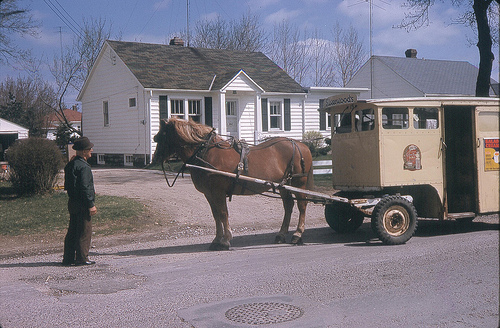 Supposedly, this is the very last Silverwood's wagon in existence. A picture both beautiful and sad. Accounts vary as to exactly when they were phased out: some say 1960, others 1964. If it was '64, I'd have very clear memories of it. But it seems incredible we got our milk this way right into the Space Age.

Bottles were still clinking together then, but no longer had the cream-top bulge that you skimmed with a little dipper. Later when I lived in Alberta, our post-war bungalow had a little cabinet at the back, the place where the milkman left the bottles and picked up the note for next day's order. Without the cabinet, the milk would freeze in the 40-below weather and the bottles burst open. 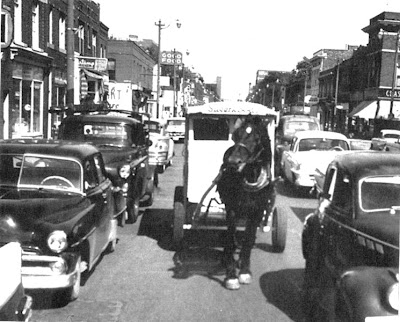 This is one of my favorites. By the look of the cars, it seems to have been taken in the early 1950s. The horse, looking intimidated, is completely surrounded by traffic.  I wonder how everyone managed. Did the horses have the right of way? What about the road apples?

Did any of them ever spook and take off at a gallop? Horses will be horses, after all.

More to the point, I wonder why everyone seems to have forgotten all about this. Like the elusive, mysterious Skeezix bird, it belongs to a past that now seems more like a mirage. 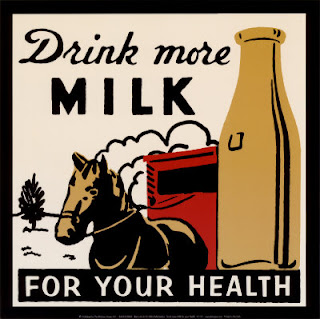 People collect dairy memorabilia now the way they collect old weather vanes or butter churns. I suppose back then, men with cold hands milked those cows every morning. It would be bottled by some primitive method, sealed with a cardboard cap. This was before the days of "homo milk", milk that had magically been homogenized so that you could no longer skim the rich yellowy cream off the top. 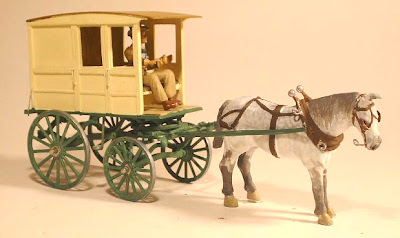 Just a model now, but I remember when it creaked and clopped and smelled like horses.

I wonder if there's still such a thing as "homo milk".

http://members.shaw.ca/margaret_gunning/betterthanlife.htm
Posted by Margaret Gunning at 9:59 AM 9 comments: