Angelina's Leg: can you say "Pilates"? 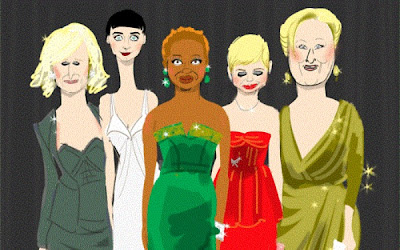 I don't know what it is about the Oscars. All right, I do: it's kind of like Christmas, with a huge buildup that lasts weeks or even months, and a lot of attention paid to tinsel, glitz and appearances. The other common point is money: the whole thing is so bloody expensive. And over so soon, leaving a sort of hangover, ashes in the mouth, a "maybe next year" feeling. 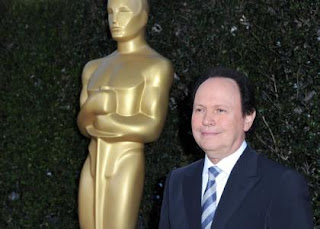 Last night I was looking forward to Billy Crystal's return as emcee: he was boffo in the '90s, after all, riding in on a horse the year City Slickers came out (but then I realized, with a twinge of shock, that it came out in 1992!). His much-celebrated montage of Oscar-nominated pictures at the start fell flat, lacking the full-tilt craziness of his former. . . scratch that, it's unfair. "Former"
means 20 years ago, the guy's about 68 now, and to be honest a lot of the younger viewers didn't even know who he was. And I could have done without that strange-looking shoe-polish-blackened hair. Give me a grey head, or even a bald head, over Hair in a Can. 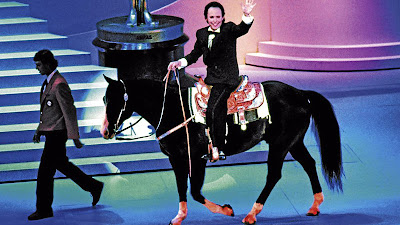 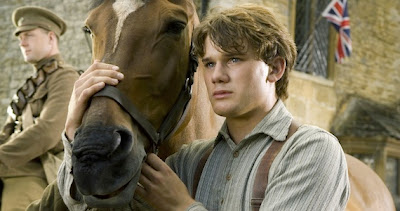 But we don't watch the Oscars for the host, his hair or any other sort of content, not even for the actual awards. I groaned when The Artist grabbed some of the biggies, including That French Guy (who honestly creeps me out with his greasy smile) getting Best Actor for leaping around and not saying anything. I live and die for silent film, but maybe that's why I just couldn't warm up to this now-Best-Picture, which failed to capture the intimacy and magic of that flickering black-and-white world. 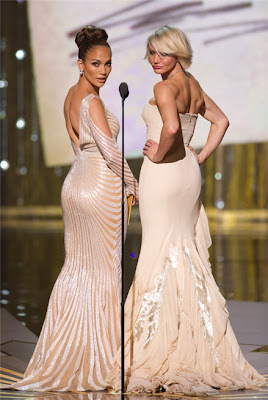 So why do we watch this 3-1/2 hour parade of show-biz superficialtiy and blatant narcissism? It comes down to one question: "Who are you wearing?" Not "what". Now we wear a person, evidently. Octavia Spencer even said that her designer "did" her, which sounded a little off . It's fun to watch these mostly-slender, mostly-young women slink around in gowns that look too tight to sit down in (and how on earth do they go to the bathroom?). But some can pull it off (or put it on), and others can't.


To quote the title of one of the nominated films, Hollywood celebrates its war horses, which is not to say they can't be handsome. Meryl Streep has won the right to wear anything she damn well pleases, and if she wants to drape herself in gold lame, so be it. And this made her third Oscar a nicely-co-ordinated accessory, if a little hard to slip into her clutch purse. 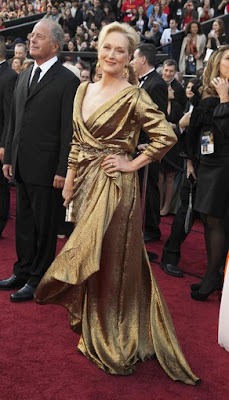 But early reviews of this lumbering ceremony complained that the heavy-looking metallic dress, combined with an acceptance speech that conveyed more embarrassment than gratitude, just added to a certain awkwardness that pervaded the evening.  Meryl, after 16 nominations, made the trifecta, but seemed to wish someone else had won instead. 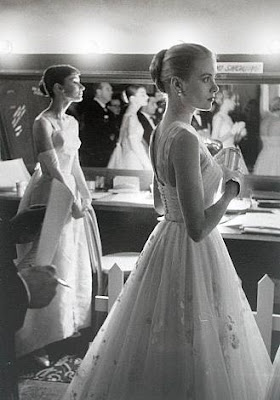 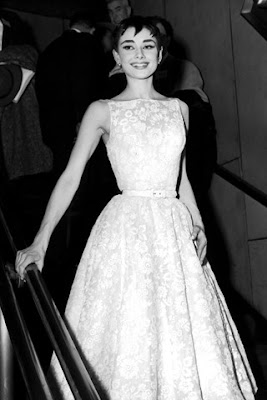 The most elegant Oscar gowns always seem to strive for a retro flavor, but if Hollywood really looked back, it would be in for a few surprises. Not that the gowns this year weren't elegant - there were a few that I loved, including one that stuck up for us war horses over 50.  But there is something - what, tasteful? What an awful word, but that's it - about Old Hollywood that is never matched in the new, no matter how retro the designers try to be.

That ubiquitous Mother Courage/Mia Farrow stand-in Angelina Jolie has never been one of my favorites: she emanates a certain brittle sense of entitlement that turns me off.  But this dress was. . . no, it was not the dress, it was the way she wore it, or rather didn't wear it,  thrusting her leg out so far that everything showed, not just up to but past crotch-level.

One cannot imagine Grace Kelly ever doing that.

The fact that the leg screamed "Pilates" didn't make much difference, because the sinewy Jolie has the kind of lean-to-the-point-of-painful look required in order to have these bizarre creations painted on.

Who designed this thing? Did they forget to sew a seam at the front? To use a haute couture expression, who gives a rip. Let's move on. 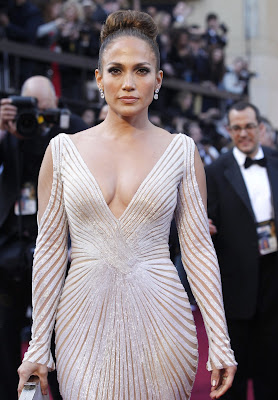 A dress should not embarrass or frighten an audience, but this one did. Again, it wasn't the dress, which is the standard skin-fitting thing with all sorts of busy starburst details. It was the way Jennifer Lopez wore/didn't wear it. As I was watching her up there on live TV beside Cameron Diaz, I said to my husband, "Isn't that her. . . " "No." "I see it, though, just the edge of it." "No, they put tape on them." "But if the dress moves 1/8 of an inch or
something. . . " "Then yeah."

It was a nip slip.

Or at least it came perilously close, and some Tweeters and Woofers out there insisted they did see the edge of the little nipper just peeking out. But why wear such a risky dress, unless you want to create the kind of suspense that makes most people cringe?

But there was someone who knew how to wear Old Hollywood and bring it off with stunning style. Wearing an Oscar gown requires runway skills that many actresses just don't possess: sticking your leg out (or your nipple, for that matter)  just doesn't cut it. But Milla Jovovich posed with elegance and class, while avoiding the self-absorption rampant among these celebrity clothes-horses. This was one of those gowns that reminded me of Ginger Rogers in movies like Top Hat and Flying Down to Rio. 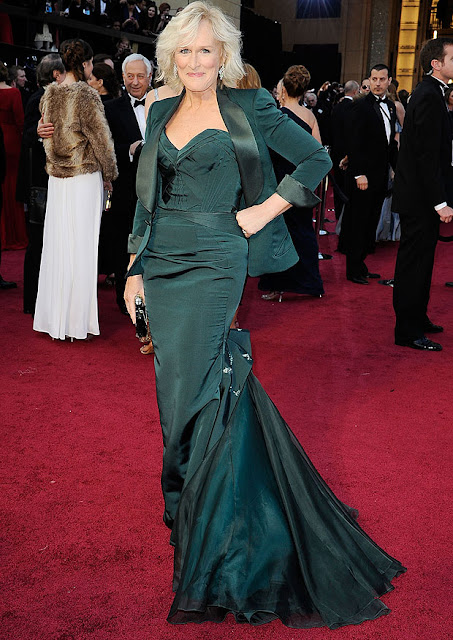 But I've saved the best 'til last. Oscar usually gives "older" actresses (i.e. over 50) short shrift in the Best and Worst-Dressed departments. I always watch out for Helen Mirren and Judi Dench, whom I didn't see last night. But Glenn Close swept in and mowed them down like a row of dominoes.

I've sometimes had the thought - one of my stranger thoughts, admittedly - "if I ever had to wear one of those really chi-chi gowns, would I have to expose that much arm and shoulder?" How good does the average 50-year-old look in those stiff strapless stand-up-by-themselves things, unless she Pilates-es like mad for months before?

Voila: the solution. A jacket! I have always loved jackets anyway, but to make one work with a gown this dramatic is true genius. Everything comes together here, the intense evening-green (and green is not usually one of my favorites), the satin lapels, the flared-out mermaid hemline. I only wish I could see the shoes.

The hair and the smile and the utter confidence and joie de vivre of her stance made Glenn Close the queen of the evening. Even if she didn't win anything, she nevertheless  carried it off to perfection.


(Post-script. I just looked up Glenn Close's birth date. Let no one ever again make snide remarks about senior citizens! At 65, Close swept the field and left all those skinny little fillies in the dust.)

http://members.shaw.ca/margaret_gunning/betterthanlife.htm
Posted by Margaret Gunning at 10:23 AM 2 comments: