OK! It's Monday morning and time for your assignment.

I've been wondering about some things - specifically, about Top Cat, that cult classic cartoon series which ran ever-so-briefly in 1961. Only 30 episodes were ever made, possibly because the characters were all petty criminals with no moral compass whatsoever. Not a good influence on the kiddies.

Watching these again on a Classic Toons channel, I'm finding them hugely entertaining. But there are certain things that make the back of my neck prickle.

My fave character in the Gang of Six, then as now, is Choo-Choo. When I looked up Top Cat in Wikipedia, an entire entry was devoted to the different characters. Here's what it said about Choo-Choo: 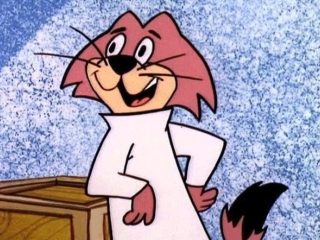 Choo-Choo, nicknamed Chooch to TC and the gang, is enthusiastic and devoted to TC even when he’s clueless as to what he’s doing. He is a pink cat with a white long-sleeve turtle-neck shirt, he is the tallest of the alley gang cats and often is depicted with the eyes of a Siamese cat. He lives at the fire house as the fire house cat as seen in one episode "Hawaii Here We Come". Choo-Choo is apparently a very skilled poker player, as stated by Top Cat in the episode "The Golden Fleecing". He had a couple of love crushes "Choo-Choo's Romance" and "Choo-Choo Goes Gaga-Gaga", however unlike Fancy-Fancy or Top Cat, Choo-Choo has no courage talking to girls. When he talks, his voice sounds like Woody Allen. In the movie, his voice is a bit narrow and higher and he plays bingo at a retirement. He is voiced by Marvin Kaplan and Jason Harris in the movie. 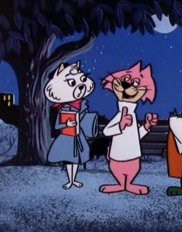 Yes. Choo-Choo is definitely the best cat, if not the "top" cat. The Woody Allen connection is a little strange however: how many people knew about him then? He was likely doing standup, and maybe he'd been on Ed Sullivan or something, but I don't think he'd been in any movies. But for some reason, Hanna-Barbera wanted a likeness of his voice, maybe for its fundamental New York-ness.

Anyway, concerning the above clip: you have to watch a specific portion, 1:09 to 1:22. It's very New Yorky, full of the funk and babble of the city and its ramshackle urban skyline. But just listen to the music! Doesn't it remind you of something, perhaps a cartoon take on Rhapsody in Blue?

Now watch the beginning of the clip from Manhattan, the first thirty seconds or so. Compare and contrast. 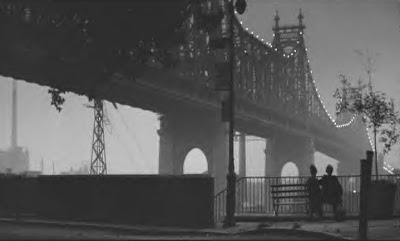 Jesus, I can't believe how similar they are! When Woody begins to narrate, it's like we're hearing Choo-Choo resurrected from the Hanna-Barbera vaults.

I can't help but think that Woody unconsciously borrowed from this cartoon when making Manhattan. This is only one of many episodes that opened in a similar way. I mean. . . with a character in it who was supposed to be him. . . 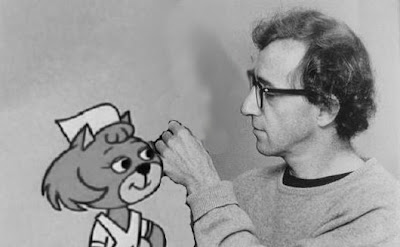 It's just odd, is all, like so many wonderful things in this not-so-wonderful world.

Posted by Margaret Gunning at 10:41 AM