I first saw this as a gif (just the horrible falling-in part) and was very upset by it. Managed to track it down pretty easily by googling "horses fall through ice": it happened in Iceland, where some bright bug decided it would be cool to parade eleven stocky Icelandic horses over ice that was who-knows-how-thick (or thin). Think of the weight on the ice of those thousands of pounds of horses, proceeding not one by one (which might have made some kind of sense), but in one impressive high-stepping row. One crack is all it would take.

Idiots! The horses look done for, but as the video unfolds the news isn't quite as bad as it seems. Still, without quick action, horses and riders would all have perished of hypothermia. Think of the terror of those horses floundering around in ice water, unable to gain purchase on a too-thin sheet of sinking ice. Those people should never have access to a horse again.

(The eeriest part is the slow-motion replay, in which you hear slowed-down screams of horror and yells for help.)

Singing in the dead of night


This started out as something else. Something about Twitter, Tweets, twights, twats (sorry, it's just too tempting) and other things I can't get used to. Not so much the three-or-four-syllable "communications" that people fling at each other, using splng tht lvs a bt t b dsrd. It's the whole concept of alarmingly shorter and shorter attention spans resulting in messages that have been reduced to a nanosecond-long chirp. 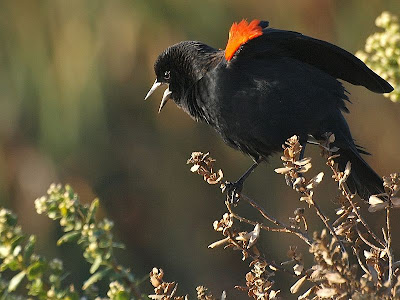 Worse than that: like the frog in the pot, the water temperature gradually increasing until the frog is quite contentedly cooked, nobody seems to notice or particularly care what we have lost.


Anyway, tweets. Why tweets? Somebody (now probably massively wealthy) thought up this idiotic avian name. Couldn't be more idiotic, unless it was Cow Pat or something. Airbrained. Lightweight. Imagine Keats ("My heart aches, and a drowsy numbness. . .") twittering, tweeting Ode to a Nightingale. Shakespeare ("Love tweets not with the eyes, but with the mind/ And therefore is winged Twitter painted blind") chirping like the bloody chirper he actually was ("chirper" being a nasty name for a blithering Englishman). 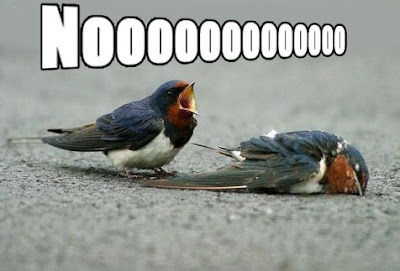 "You'll have to learn how to do it," my husband says to me, "because you won't be able to survive if you don't." That's worse than sex. I'll have to do it, as if it's some dire and unpleasant bodily function you nevertheless can't avoid. But what alarms me is what fun everyone else is having, doing something I just bleepin'ly dread.


So anyways. Somebody had the bright idea that we should all become birds, and just twitter and twatter, nitter and natter at each other all the day long. Birds chitter and chatter, but they also kill. They evolved from dinosaurs, more directly than any other living species. In fact, they are now known to be the only direct descendents. Dinos ran around with feathers on, you see, long before they learned how to fly. I can't imagine how creepy that must have been. 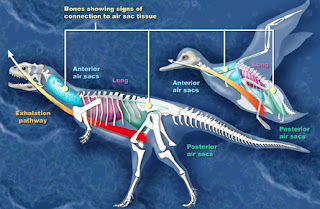 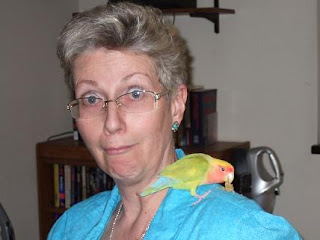 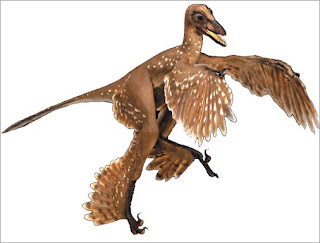 Given the shrill vocalizations of most birds, including Jasper my addle-headed lovebird who must think he's a full-sized Amazon parrot, those dino-birds must have been deafening. They probably had the same cold round beady black eyes my pet bird has, those scaly feet (some remnant of lizard scales, no doubt). My bird feels a strong attachment to me, but that's because he's convinced I'm either his mother or his mate. Without the steady flow of seed mix, he'd completely ignore me. 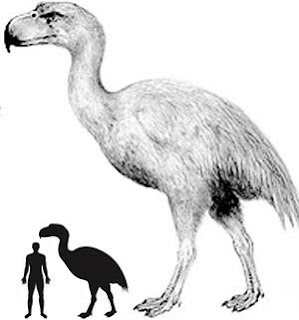 So anyways. What am I getting at here? Nothing much. Why not Bark-bark or Neigh-neigh or Worm-bluggh (or whatever worms do to communicate)? No, it had to be Twitter. 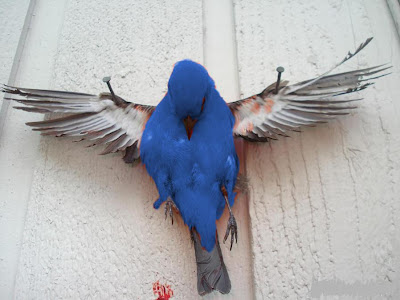 Posted by Margaret Gunning at 1:20 PM No comments: 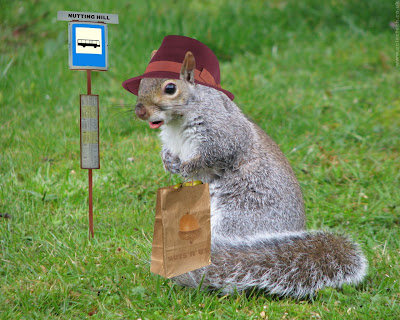 Oh Lor', here comes anodder one-o-dem lessons she loyks to gie' us which is mos'ly opinion. If you've been following this long choo-choo train of thought which started with Dennis Potter's landmark TV series The Singing Detective, I've been exploring English dialects, and now find myself at the mother lode: Beowulf, which scholars tell us (and they're lying) is the first great poetic work of the English language. 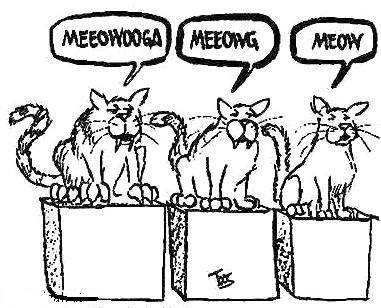 English language, you say? Just look at the cauldron of oatmeal you see below (way, way below: I somehow had a lot to say today). It's so garbled and Germanic, I only included a tiny snippet. The first "word", hwaet, which really should be followed by an exclamation mark (if such things existed then), was once demonstrated to me by an English professor. He walked into the classroom, stood at the front of the babble, and said, in a resonant English-teacher voice and with the greatest of authority: 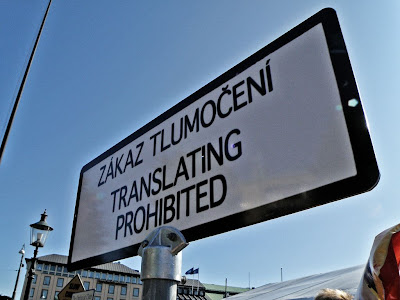 He pronounced it more like waat. Like two boards, long pieces of wood slapping together. It worked. This little syllable is remarkable, because it can mean so many different things:

"Come and listen to my story 'bout a man named (Beowulf)". 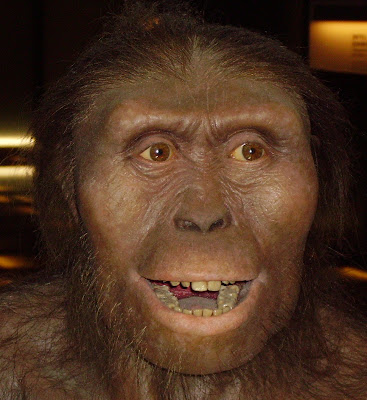 It means pay attention, listen. It means, as an informal speaker might say, "So." Or "Anyway." "Right." "As I was saying. . . " "Listen up." "OK then. . ." (except much more dramatic: how many of these Old English bro's really understood literature?).

I won't even try to get into Beowulf, it's too long and impenetrable even translated into "normal" English. I took a Chaucer course years ago and it was fascinating, mainly because the prof was fluent in Middle English and recited Canterbury Tales in a gusty, careening voice that somehow made it understandable. For all that, I guiltily bought a line-by-line translation, Middle English on left, "normal" on right, in order to pass the course. 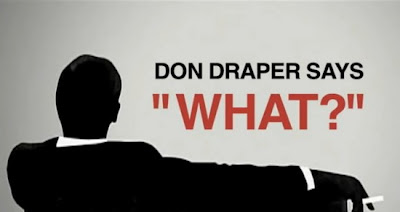 As you can tell, I'm more fascinated than proficient in the study of language. Sometimes just the thought of it, the very thought of it, gives me the shivers. I've also made a semi-formal study of anthropology at university level, and one of the subjects that comes up repeatedly is the development of language. More so than tool-making or even planting crops, it marks the threshhold we crossed into becoming fully human.

Here's what I larr'nd. There were many hominid strains (humanoid, in anthro jargon), many of which died out under plague or warfare. There were so few people (or near-people) in the band, it wouldn't take much. Evolutionary dead ends. But how many of them developed language, and what did it sound like? 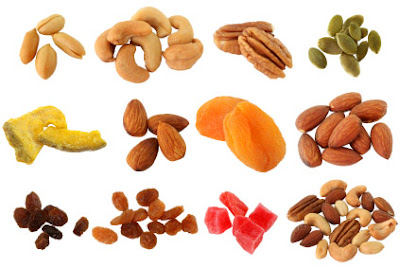 Why does every human culture invent language, and how does that come about?

What was the first word? The first sentence? What did early hominid/humanoids feel compelled to name? Did they name themselves first? 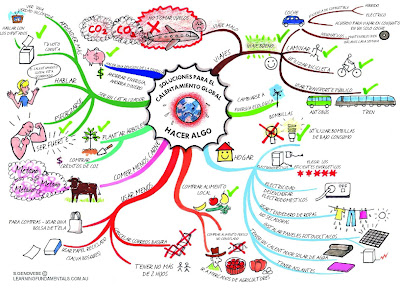 Early anthropology texts assumed language developed to aid men in communication during the hunt. No mention was ever made of the inconsequential task of bearing and raising children, not to mention gathering food for meat shortages (hunter-gatherers, remember?). And the meat shortages could go on for months, even longer. Would humanity even be here without all those nuts and berries?

And you know what it's like when a bunch of women get together, my God! The jabbering never stops. 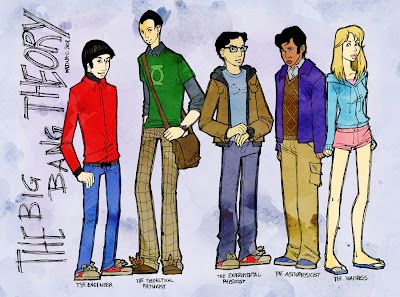 Maybe language developed to break up fights between the men. Come on, you guys! Can't we all just get along? And Leonard, get away from Penny once and for all.

Somehow or other, and this is the part that eeries me out, some upright-standing apes, not much more evolved than gorillas or chimps except for their opposable thumbs, began to grunt and yell in a meaningful way. Maybe it started out with a call, a "hey! Look over there, Hairy-butt, an antelope." (Or was it hwaet?). 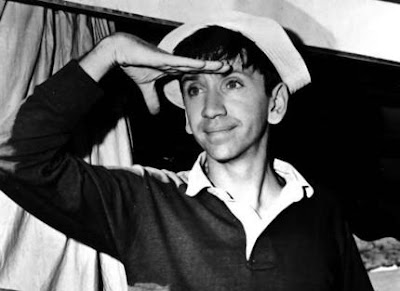 Maybe it was "no, I don't have stretch marks, but my boobs are getting huge," or "Get off me, Hairy, I have my period."

Or, "Hey, Gronkette, let's go out and save humanity by gathering a few nuts."

So slowly, or maybe not so slowly because I believe evolution happened in bursts (a theory known as "punctuated equilibrium"), language evolved, and it was probably different in each little pocket of humanity that was bumping along the rocky road of evolution. I don't believe anyone was thinking in terms of tablets or apps or whatever-the-fuck they are (I'm hopelessly behind here), just surviving day by day, trying to get their basic needs met. It was a long, long way from grunts and gossip to hwaet, and it's been a longer way, it seems, to the murdered grammar and twisted syntax I've sometimes analyzed on this blog. The language is being shredded, devalued, and slowly but surely, school kids are less and less aware of the cultural deeps they come from. Who will teach them references to the Bible (too archaic) or Chaucer (too weird), or even J. Alfred Prufrock or Howl? It's all going away. In its place will be the lols, WTFs, tweets and twats, and other mindless verbal monstrosities that drove me away from Facebook, probably forever.

Oh OK then, I'll shut up, and here is a snippet from this Beowulf, if for no other reason than to show you how many different ways a few lines of literature can be interpreted. NOW do you see where human misunderstandings come from? 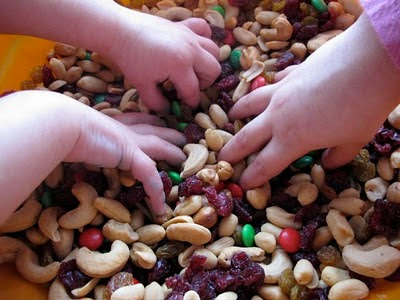 Beowulf, the great Anglo-Saxon epic poem by an unknown author, was composed some time between the 8th and the 11th centuries. The text exists in only one manuscript which dates from about the year 1000. The poem was largely unknown until the first printed versions of the poem were published at the end of the eighteenth century. Soon, short English translations of various parts of the poem began to appear, and within a few decades, in 1833, the first full-length English translation was published.


Since Beowulf is written in Old English, the earliest known form of the English language, one might assume that it would be easy to translate, at least easier than works printed in languages more substantially different from modern English. Yet looking at the many translations of Beowulf that are available in bookstores and libraries, it's immediately apparent that they have important differences in language, form, and style. This immediately raises the questions: Why are these translations so different? And how can I decide which, if any, is the "best" to read?


To begin answering these questions, let's look at the opening lines of the poem. The boxes below contain the original Old English version and my own literal (word-for-word) translation.

Next, in the following boxes, look at how four modern translators have rendered these lines.

You'll note that the differences begin with the translated versions of the opening word of the poem, Hwaet. This word, literally translated into modern English, means What, but its Old English meaning is somewhat different. In Old English, when stories were told orally by a storyteller, the word Hwaet was used to get the audience's attention at the beginning of the story in the way that a phrase like Listen to this! might be used today. Translators know that just using the word What wouldn't make much sense to modern readers, so the four translators above have chosen words which they hope will convey a similar meaning.

Posted by Margaret Gunning at 10:06 AM No comments: