Vincent, you're getting paint all over everything! 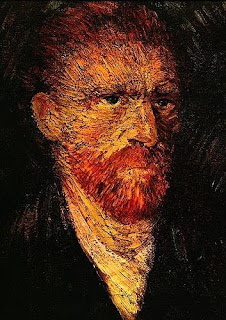 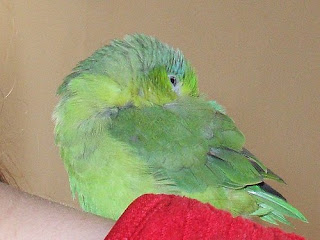 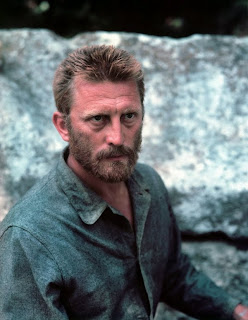 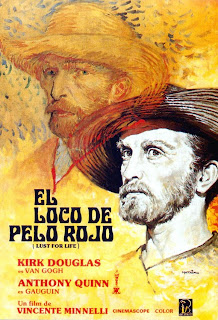 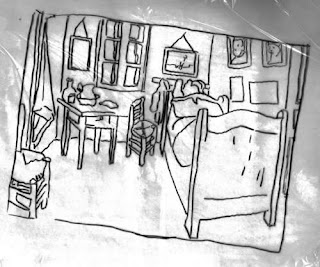 How many times have I seen this thing? Like Gone with the Wind or The Wizard of Oz, it just seems to come around.
Except that this one grabs me, every time.
Kirk Douglas excels himself, does better than he knows how, in portraying the awful and sublime life of Vincent Van Gogh. We all know Van Gogh's paintings from the coffee mugs and post cards and tea towels and various fripperies that bear his images. We have all heard reports of the multimillion dollars even his smallest canvases now command.
I didn't wanna do it, I didn't wanna do it. I had recorded it on my PVR a few days or weeks earlier and it was sitting there. It was on TCM, so I knew it wouldn't be carved up. I thought, after a shitty week, oh what the hell.
My husband has been away all week. Normally I use this sabbatical as a time for reflection, quiet, and going out to restaurants for one meal at 3 pm. This week was just - oh I don't know, it bored the piss out of me. Things went around and around in circles and some days I didn't even get out due to the wretched house-shaking monsoon outside.
I made fudge and I ate too much of really bad things, like back ribs and fries. I just felt discontent, as if I didn't fit my skin. THEN, early yesterday morning, the power went out, and I felt helpless. Not only was it cold and dark, but my lovebird began to shiver, and I realized with a shock that he wasn't going to survive dramatically dipping temperatures.
I panicked. I moved the cage all over the house. Is this warmer? No. It's already 63 F and dropping (when his usual room temperature is 72). I dithered around. I covered the cage with a tablecloth, wondering if he could breathe. He clung to the pointy roof of his palatial cage, silent and not moving.
Then I thought: what's the warmest room in the house? Our bedroom! During our rare Vancouver heat waves, it's absolutely awful, and sometimes I have to sleep downstairs. So I lugged his huge cage upstairs and gained purchase of 3 degrees, but it was not enough.
My mind spun around and around. Did we have any source of heat left? Should I stick him in my pocket or something? Then I thought: of course! Hot water. But my idea was not quite on-target.
I put a bowl of hot water on the floor of his cage, covered with a sieve so the dumb bird wouldn't try to bathe in it and scald himself. It bought me a couple more degrees. But it still wasn't enough.
Depressed and isolated, not wanting to go out because I had to look after this incubator baby, I phoned my daughter-in-law to ask if she had power. She did. She also had, right to hand, a number to call for info on power outages.
"But it'll take me hours. They'll put me on hold."

"No they won't. Try it."
They didn't. I got the information I needed in 30 seconds. The power would be on no later than 4:00 (and it was 1:00: would we squeak through?) She also suggested, instead of bowls of water that got cold in 2 minutes, to fill the bathtub with a few inches of hot water and wheel the cage into the bathroom and shut the door.
Within 15 minutes, I had set up the ideal sauna, and Jasper was thawing out, singing and chirping and ringing his numerous bells and acting like a bird again.
Anyway, all this shit ended at 2 pm, after 6 hours of blackout. It could've gone all night, in which case my bird would have died of hypothermia.
So, completely unrelated to this, or not, I was exhausted by the evening, lonely, sugar-logged, and just wanting any old thing to distract me. Maybe I shouldn't have picked Lust for Life.
Vincente Minnelli strove to make this movie as faithful to Van Gogh's paintings and life as possible. He dragged trees in to fill holes where they had been cut down. He put up a false front for the yellow house Van Gogh lived in with Gaugin (a bravura performance by Anthony Quinn, who likes his women "fat and vicious and not too bright"). Stories circulated about old women from remote places in Provence who gasped on seeing Douglas in makeup and exclained, "He has returned!"
A companion movie, a "making of" was shown after the main feature, and in it Douglas spoke fluent French to one of these elderly keepers-of-the-memory (who are all gone now). Why did it surprise me to see Douglas speak fluent French? He was the Ragman's Son (I read his auto-bio years ago, and he came up from such dire poverty that the family sometimes had nothing to eat). I associate him with powerhouse roles, Spartacus and the like,and that exaggerated growling voice beloved of impressionists (not the painters!) like Frank Gorshin.
I don't know what happened here. Some kind of transubstantiation. He - became. He felt this man. He slipped into his skin, his uneasy incendiary brain. The thing is, Van Gogh painted innumerable self-portraits, and all of them had something of Kirk Douglas in them. In some cases he could have been the model.
I don't know what my point is here, and I guess I don't have one. Life is a mess, and right now I'm a mess, full of sugar, lonely, completely stalled and discouraged in my work, yet still blown away by a couple of things.
The sun is shining right now. Shining on the high cedar boughs that garland my upstairs office view. The light is dappled and various, a Gerard Manley Hopkins light.
The sun is out. I never thought I'd see it again.
I don't know why we keep on. Sometimes it's wretched. Ask any genius. We have a spark of life in us, like a candle inside a blubberous whale. Van Gogh had to paint quickly because he knew he didn't have much time. "You paint too fast!" Gaugain roared at him. "You look too fast!" he growled back.
I'm not even going to try to tie all this together because life, as it is, isn't tied together very well. It's sloppy and hard to navigate. For me, anyway. It's better and worse. Some suffer more than others.
But I'm glad my little bird made it back into the light.
Posted by Margaret Gunning at 8:35 AM No comments: