Pie are square (whoops, round!) 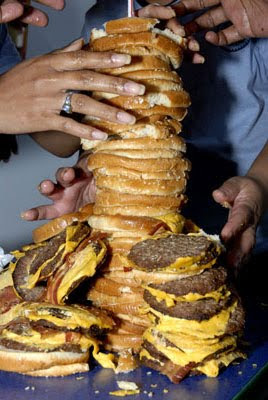 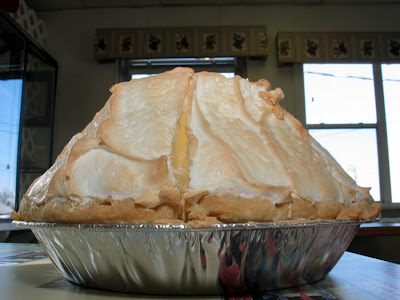 I'm not much when I first wake up in the morning, but I had to be up today. My daughter-in-law was stopping by this morning to pick up a newspaper flyer so she can buy one-o'-dem-dar hot water machines (the Keurig type, which we were recently given and couldn't figure out, except that now we're addicted to it, to that little sucking sound as coffee instantly, effortlessly fills your cup).

When I started noodling around this morning trying to find news sites, I hit on the New York Times. I follow Dick Cavett's blog, always backward-looking and dropping names with audible clunks, but somehow as compulsive as celebrity-watching itself.

But on the same page, I saw the link to the food section: "Pies to Die For".

I wonder if anyone else gets the irony.

We hear, constantly, about how unhealthy it is to be obese, about how it strains the health care system almost beyond the breaking point, and about how it's still escalating. It has oozed into the lives of innocent children, kids raised on McDonald's and almost complete inactivity until their arteries are plaqued-up as severely as a 75-year-old's.

Cheek-by-jowl (pun intended) with these alarms are blaring ads for family restaurants serving ever more grotesque portions of really-bad-for-you food. Fast food chains keep upping the ante, with KFC serving up these horrible things made of two deep-fried chicken patties instead of bread (and who knows what the filling is. A pound of deep-fried peanut butter?)

Blecccchhhh! But people are buying it. People are eating it.

Fat is the new thin.

I can't remember a time when the culture wasn't obsessed with thinness. Models and actresses have that translucent look, as if they'd disappear if they turned sideways. Their pictures are splashed all over the women's magazines, their bony chests sticking out like a chicken's, often with weird globular bolted-on breasts that clearly display the join. These space-alien versions of womanhood appear cheek-by-quivering-jowl with recipes for mouthwatering, saliva-gushing, quintuple-chocolate indulgence cake (the recipe always containing at least a cup of butter) and other scrumptious heart-attacks-waiting-to-happen.

Maybe that pie really is to die for.

Oh, I'm a great one to lecture. I've been a shape shifter all my life. Recently, after a major weight loss, I've begun to creep upward again. I'm just hungry all the time. There are certain intractible family stresses that take a constant toll. Or so I tell myself.

The thing is, all that scrumptiousness won't particularly appeal to a naturally thin person. They will take one taste and go, "mmmmmmmmmm!" - meaning, "bleccccccchhhhhhh". It's kind of like a non-drinker trying to get through a cocktail, finally leaving 2/3 of it sitting on top of the piano. (Sick, eh?) So how come so many people have seemingly had their "blecccccchhhhh" mechanism disabled?

It's NOT heredity, folks. You don't "inherit" fat in a couple of decades. Heredity doesn't suddenly jump out at you like a jack-in-the-box, no matter how convenient it is as an excuse.

It's not just the ready availability of four-patty cheeseburgers (Faster! Higher! Greasier! There's a recession on, and we need those obese people's bucks!). Who actually does anything any more? Who walks? Men drop their wives off at the door of the mall, thinking they are doing them a favor so they don't have to walk the one minute or so from the car.

I walk all the time, and quite frankly, I'm a freak. People stare at me strangely, constantly offer me rides because they assume I'm too impoverished or too weird to drive (maybe so!), or offer false congratulations. "Good for you! I should be doing the same thing" (but I'm not, because I don't want to be stared at and considered weird).

When my daughter-in-law, a keen observer of social trends, was looking through her Home Outfitters flyer, she saw an ad for an egg cracker. "So we don't even crack our own eggs any more?" What next, I wonder - some sort of device you attach to the toilet paper roll?

I have tried to swear off those super-hyper-morbidly-obese shows on TLC, because it's hard to look at anyone whose body has become that grotesquely misshapen. They hardly look like a human bodies any more. Like the gargantuan Mr. Creosote of Monty Python, these patients (usually in for bariatric surgery) look like they're on the verge of exploding. They usually say they don't eat very much, and have "feeders" (often wives, though husbands will do) bringing food to them all the time. What kind of food, and how much, we can only imagine, but like a stash of porn, it's kept secret.

For a while, there was a ludicrous series about an obesity clinic in the States which allowed its patients to order in pizza which was delivered right to their rooms.

There's a certain strange term that has cropped up on these shows, and it sounds like the evil scientist in some low-budget 1950s horror flick: panniculus. What happens is, when a person exceeds, say, 500 pounds and keeps gaining, the fat gets confused and doesn't know where to go. Everything is maxed out, so to speak. So, instead of exploding, the body provides a sanctuary for the excess fat: a sort of circular blob, often attached to the abdomen or inner thigh. It lives there, expanding 'til it's full-up and another one pops out somewhere. Dr. Panniculus, the evil wizard of fat, has taken over the body completely.

People in this situation sometimes do lose weight, but they end up looking like deflated balloons, the stretched skin flopping around and making life miserable. It's usually removed, but we often hear that over 90% of people with major weight loss gain it back again, and more.

What would happen then? Would you become a sort of living Mr. Creosote? How much can skin stretch, anyway?

More to the point: where did this plague come from? When I was growing up, we had a neighbor who weighed, maybe, 280 pounds. She was socially shunned and had very few friends, so my mother took her on as a project. (She had caseloads, not friends.) Though it reeked of pity, this at least got her out a little. Otherwise she would have stayed in the house, hidden from sight.

Dick Cavett posted a blog about obesity, and wondered if the circus fat lady of his youth might be considered relatively thin now, or at least unremarkable, not even large enough to qualify for something like gastric bypass.

Will this just keep on going? Where does it stop? I think obesity is affecting about a third of the population now. If something becomes that prevalent, it gradually becomes more acceptable. Or maybe we just don't see it any more.

I recently tried on some clothes, just cheap little tops, grabbing for a Size Large because my ass is so big right now (and the store so tacky). They nearly fell off me. But the Medium slid all over me too. Finally I resorted to a Small, and it was still pretty generous. I wasn't in the Women's(i.e., "plus") section either, just the average range.

I'm not huge, but no way am I small either. I just have a big butt. It has always been a fitting problem. Until now.

Is this size manipulation just an adjustment to the burgeoning bodies of consumers, or a way to make women feel better about themselves? Or just buy more? Is all this a sort of weird rebellion against the imperative to be thin, thinner, thinnest? (If so, the boomerang is about to smack us all on the back of the head.)

Years ago, it used to be considered bizarre and daring for women to wear pants. In the early '60s, long hair meant that you were a pansy. When I was a kid, nobody but sailors wore tattoos, and women never did unless they were in the circus.

We get used to things. They become normal, or at least standard and unremarkable.

Type II diabetes is so common now, people almost expect it. You manage it, but don't try to cure it. Just take your meds, and go on eating.

Food as a cheap, ready drug? Escalating stress levels? Environmental chaos, pessimism and doom? Economic recession? Nature's way of tipping the board and sending us the way of the dinosaurs, as yet another experiment that either failed or just ran its disastrous course?
Posted by Margaret Gunning at 8:41 AM 2 comments: