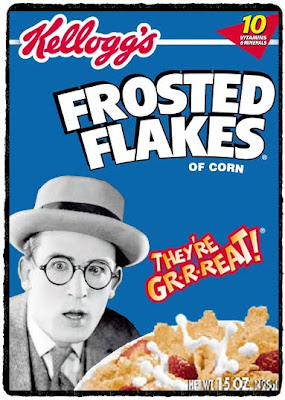 This blog was originally going to be about the Writer's Life, until I realized there were already approximately one billion blogs called the Writer's Life, so to hell with that idea! I do however like the image of the tightrope walker (a picture of great-uncle Howard in 1906) and its implications of an endless struggle for balance.
That's a long way of saying I can write about anything I bloody want to, and probably will. The last blog I tried to keep, which eventually crashed in flames, was far too creative (hmph!) and eventually harassed into an early demise.
Or at least that's how it seemed to me.
This one, well, I'm barely keeping a foothold as I struggle with details that are probably ridiculously simple for anyone else. So I just bash away at it, wondering what all those little dragonflies are and why I can't post a photo in the middle of my post. Oh foo, someone will attack me soon anyway.
So what's this about? Cornflakes, I guess, and the way a certain man eats them (every day for 37 years, and perhaps more). Do I represent the cornflakes of his life? In any case, that's how long we've been together.
People wax romantic (or at least wax their cars) when they find out that we've been together for such a jaw-dropping amount of time. I was, of course, ten when I married him. Bill is a good guy, but he drives me crazy. He's irritating. He has gone deaf and won't admit it. And God, he looks old. If he's my mirror, then I am in big trouble.
But nothing could ever take the place of so much shared experience, grief, elation, and the boring trudge of everyday existence. The cornflakes of life. There are still times when I wonder if I can stand this, but I know no one else could live with me, with my permanent tendency to ricochet when things go wrong or I get pissed off.
He's a good guy, like I said, a very smart guy, a professionial (environmental expert, which is direly needed these days), but most of all a man who protects his family and loves them without reservation. His Dad lived to be 93 and towards the end, ANYTHING would make him cry. It was irritating, but what's even more irritating is that Bill is moving inexorably in the same direction. As my daughter once put it, "He cried when the hamster died."
There's a neat saying that sums it all up: "The rocks in his head fit the holes in mine." I'm supposed to be the crazy one, but maybe we're meeting in the middle (or I've driven him crazy, whatever). I don't get it, the unutterable part of it, the thing I can't explain: maybe it's like that old Jerome Kern song, Bill.
"And I can't explain, it's surely not his brain
That makes me thrill
I love him, because he's -
I don't know,
Because he's just. . . my. . . Bill."
Oh yah.
Posted by Margaret Gunning at 8:34 AM 1 comment: