I was so GODDAMN happy to see that this creep, Rodney Howard-Browne, was arrested for holding his GODDAMN mass church services in violation of every moral law in the human condition. Many of these evangelicals/Pentecostals are giving services practically daily, with anywhere from 500 to 1000 people crammed together in sweaty pews in swampy places like Florida and Louisiana. This guy goes way back (I've posted about him before), back to the Toronto Blessing phenomenon where congregants screamed and flailed and threw themselves on the floor. It spread like a contagion, and this guy was at the forefront before he mysteriously disappeared from Canada. Since then he has popped up again to spread the manure of his beliefs, preaching here, healing there, dancing heavily and clumsily, and generally making an ass of himself, and THAT'S OK, but what he's doing in the States is the most immoral thing I have ever heard of. I would call him a socio-pastor. Below is a brief excerpt of the NBC News article that had me cheering for the first time in an eternity: 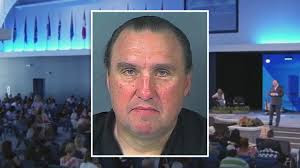 (YES, IT’S TRUE! Pentecostal pastor Rodney Howard-Browne (shown here in the throes of the Holy Ghost) has just been arrested for being a crazy, immoral, totally selfish dick-head. Here’s the story:)

“A controversial Florida pastor who refused to stop holding packed church services, in violation of coronavirus restrictions, was arrested Monday by a local sheriff who said the preacher was putting his followers’ lives at risk.
Pastor Rodney Howard-Browne was booked on misdemeanor charges of unlawful assembly and violation of public health rules after flouting social distancing orders at The River at Tampa Bay church.
Howard-Browne—an ally of President Donald Trump—has been an outspoken opponent of social distancing requirements, claiming his church has machines that can stop the coronavirus and vowing to personally cure the state of Florida himself.
'His reckless disregard for human life put hundreds of people in his congregation at risk, and thousands of residents who may interact with them this week, in danger,' Hillsborough County Sheriff Chad Chronister said at the press conference. Howard-Browne did not respond to an immediate request for comment.”

Posted by Margaret Gunning at 1:59 AM No comments: