"Actually, these conditions don't look very good at all, do they?" BLOGGER'S NOTE: It's not too reassuring when the pilot of the plane comes on and tells the passengers: "I still can't see very much at the moment. Keep you informed soon as I see something that gives me a clue as to where we are. We're going down in altitude now and it won't be long before we get quite a good view." Little did they know that "quite a good view" meant crashing into the side of Mt. Erebus.


12:18 MC We have a low overcast in the area at about 2,000ft and right now we're having some snow, but visibility is still about 40 miles and if you like I can give you an update on where the cloud areas are around the local area.

F/O Yes 901, that would be handy. We'd like to descend and maintain flight level one six zero.

MC 901, this is the forecaster again. It looks like the clear areas around McMurdo area are at approximately between 75 and 100 miles to the northwest of us but right now over McMurdo we have a pretty extensive low overcast. Over.

F/E That'll be round about Cape Bird, wouldn't it?

F/E Got a low overcast over McMurdo.

MC Within range of 40 miles of McMurdo we have radar that will, if you desire, let you down to 1,500ft on radar vectors. Over.

CA Well actually it's clear out here if we get down.

F/E It's not clear on the right-hand side here.

CA If you can get HF contact tell him that we'd like further descent. We have contact with the ground and we could, if necessary, descend doing an orbit.

12:32 F/O We'd like further descent and we could orbit in our present position which is approximately 43 miles north, descending in VMC.

12:34 CA Ladies and gentlemen. We're carrying out an orbit and circling our present position and we'll be descending to an altitude below cloud so that we can proceed to McMurdo Sound.
F/E There's Wilson.

F/E Still no good on that frequency though?

F/O Roger 901, you are now loud and clear also. We are presently descending through flight level one three zero, VMC, and the intention at the moment is to descend to one zero thousand.
12:36 F/O We've lost him again.

CA I've got to stay VMC here so I'll be doing another orbit.

12:42 F/O 901, still negative contact on VHF. We are VMC and we'd like to let down on a grid of one eight zero and proceed visually to McMurdo.

MC New Zealand 901, maintain VMC. Keep you advised of your altitude as you approach McMurdo..

CA We're VMC around this way so I'm going to do another turn in.

12:45 CA We had a message from the Wright Valley and they are clear over there.

MU Taylor on the right now.

MU This is Peter Mulgrew speaking again folks. I still can't see very much at the moment. Keep you informed soon as I see something that gives me a clue as to where we are. We're going down in altitude now and it won't be long before we get quite a good view. 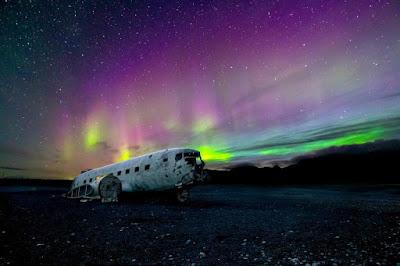 F/E Yes, I reckon about here.

MU I reckon Bird's through here and Ross Island there. Erebus should be there.

CA Actually, these conditions don't look very good at all, do they?

CA Have you got anything from him?

CA We're 26 miles north. We'll have to climb out of this.

F/O You're clear to turn right. There's no high ground if you do a one eighty. 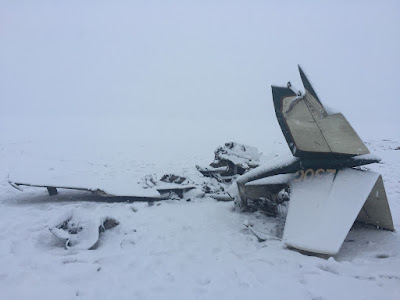 Posted by Margaret Gunning at 11:56 AM No comments: