Louis Wain: a cat's a cat 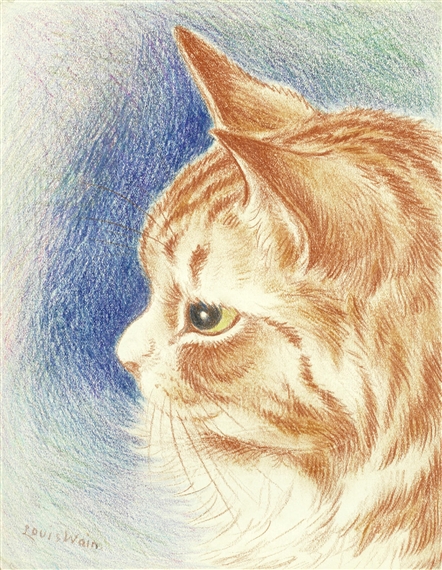 I think I was in my teens when I first encountered the enigmatic, provocative cat paintings of Louis Wain. Throughout his life he was moved to represent his beloved cats in a wide variety of artistic styles, including a highly abstract form which was so original and unknown that it sometimes scared the hell out of people. As is so often the case, fear and ignorance hardened the public's  perception of the artist into a distorted and only partially-true stereotype.

Thus a brilliant and inspired, not to mention significant, contributor to 19th century art was jammed into a box of conventional belief and nailed there, a condition made infinitely worse by constant replication on that mindless Xerox machine of a communications system, the internet. So how much of it is actually true? 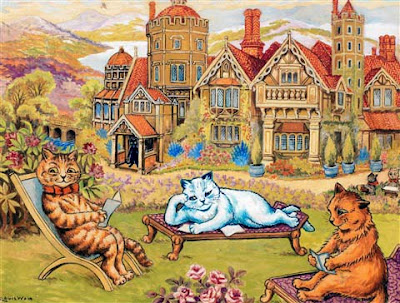 When I was about 16, I remember reading  a Time-Life coffee table book called The Mind which was full of (I realize now) ridiculous, stigmatizing untruths about mental disorders. Wain was used as a classic case of "the tragedy of mental illness", with his charming magazine cats slowly and hideously devolving into foul fiends from hell: surely, the authors claimed, a sign that Wain had gone irreversibly "mad". 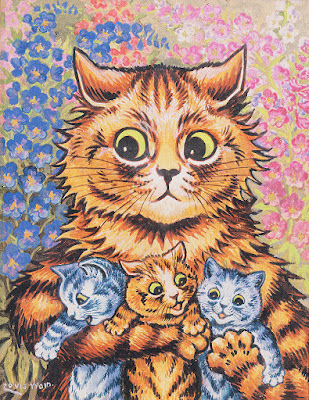 This "madness" was labelled "schizophrenia", at a time when 90% of the population would define the term as "a split personality". Nobody who wrote about this had the first idea what they were talking about, but all at once Wain's work was cemented in a sort of immutable chronology, with the most representative and realistic cats at the beginning, followed by the whimsically naughty greeting-card-style cats, then those oddball wildly-colored-and-patterned things, and finally, the horrendous, scary, oh-my-we-don't-like-that-one cats trailing along at the end. This was proof positive that not only had Wain gone mad,  his very art had slowly but relentlessly deteriorated from drawing-room respectability into something no decent person would ever want to look at. 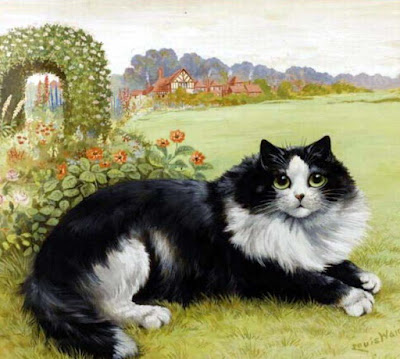 There is biographical evidence that Wain WAS sometimes difficult to deal with, even antisocial, and could be "inappropriate" (which in Edwardian times was almost synonymous with being a "madman"), and spent some time in an asylum when his sisters had had enough of his strange ideas and angry acting out. As in too many cases, he landed there in part because his funds had run out and he had nowhere else to go. For as time went on, his charming anthropomorphic cats went out of style, as everything else eventually does. 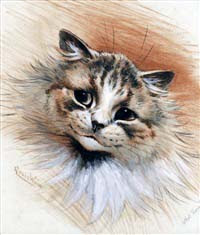 Because he was an artist in his soul and not just an illustrator, Wain kept on painting, even while hospitalized - and yes, he DID paint his cats in a tremendous variety of styles, from the most purr-rumbling, paw-kneading, whiskery realism to the most wildly, even disturbingly abstract - but none of these works was ever dated. Thus there is no evidence at all that as his mind supposedly deteriorated, his conventional cats relentlessly and sequentially devolved from whimsical creatures to bizarre psychedelic ones, to (finally) those dreadful Satanic figures that barely resembled cats at all. 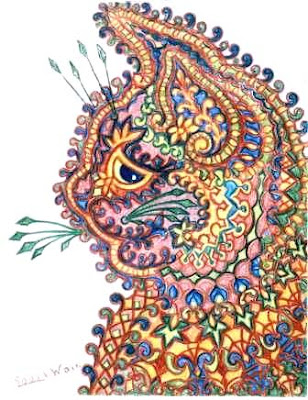 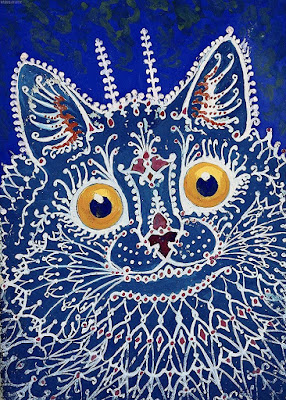 Art historians who have actually taken the time to research his life have concluded that Wain was likely not a schizophrenic at all, but may have lived with another condition that was even less understood. We now know much more about autism and Asperger syndrome and the many gradations of it, and are even beginning to unlock its artistic/creative significance. From existing records, it is likely he painted his conventional cats in parallel with the wildly imaginitive, even disturbing-looking cats he became famous for. Yes, he probably DID experience a chronic mental or perhaps social liability that sometimes separated him from his fellow humans. But he never once gave up on his beloved cats, portraying them in every conceivable manner, with a few that were so startlingly original that no one knew what to make of them. They just didn't fit anywhere. Happens sometimes with these artist types, as with that other fellow. . . you know, the "madman" who painted all those sunflowers. 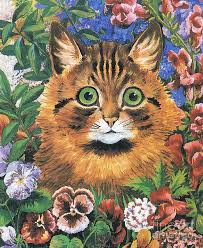 The little arrangement I give you here is NOT in any kind of chronology. Nor is it completely random. These cats are here because I like them. The more extreme ones aren't here, not because I dislike them but because they're already getting enough (if not too much) play on websites called Psychedelic Cats! and Wain's Schizo Cats. Each inevitably includes a rectangular diagram cut into squares, with each cube representing a stage of successive deterioration rather than a phase of inspiration. I even found a few paintings with labels like "early stages". Obviously, Wain's originality was a sign of sickness. We are still poking the madman with sharp sticks.

Anyway, as I sigh in my usual  exasperation at what a lot of ignorant lunkheads human beings are, I found this snippet on an art site, and it clarified things a little bit for me. 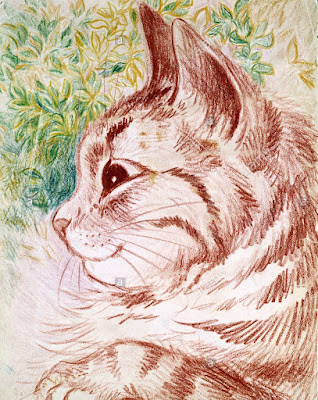 "Dr. Michael Fitzgerald disputes the claim of schizophrenia, indicating Wain more than likely had Asperger syndrome (AS). Of particular note, Fitzgerald indicates that while Wain’s art takes on a more abstract nature as he grew older, his technique and skill as a painter did not diminish as one would expect from a schizophrenic. Moreover, elements of visual agnosia are demonstrated in his painting, a key element in some cases of AS. If Wain had visual agnosia, it may have manifested itself merely as an extreme attention to detail. 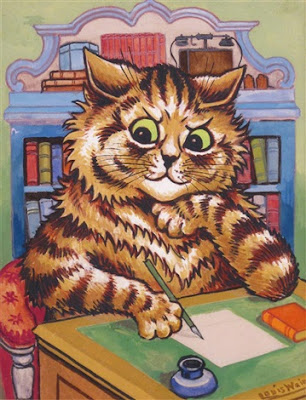 A series of five of his paintings is commonly used as an example in psychology textbooks to putatively show the change in his style as his psychological condition deteriorated. However, it is not known if these works were created in the order usually presented, as Wain did not date them. Rodney Dale, author of Louis Wain: The Man Who Drew Cats, has criticised the belief that the five paintings can be used as an example of Wain’s deteriorating mental health, writing: “Wain experimented with patterns and cats, and even quite late in life was still producing conventional cat pictures, perhaps 10 years after his [supposedly] ‘later’ productions which are patterns rather than cats.” 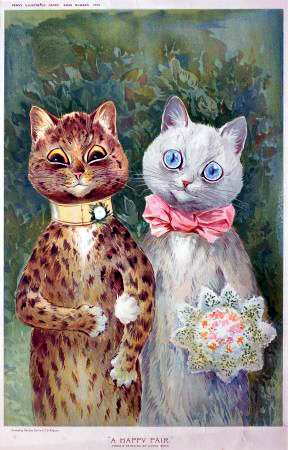 H. G. Wells said of him, “He has made the cat his own. He invented a cat style, a cat society, a whole cat world. English cats that do not look and live like Louis Wain cats are ashamed of themselves.”

His work is now highly collectible but care is needed as forgeries are common." 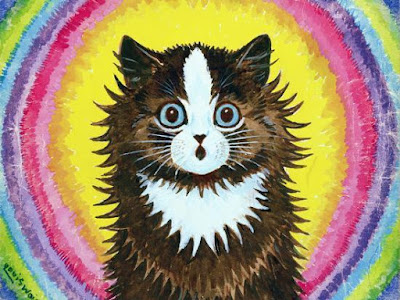 Posted by Margaret Gunning at 12:57 AM No comments: