Posted by Margaret Gunning at 11:24 PM No comments:

Trolls being used to sell a line of makeup. Not sure what the deal was here, because this was meant as a tie-in to the Dreamworks animated movie Trolls. The so-called "trolls" in this movie looked like insects from someone's nightmare, nothing remotely like any kind of troll ever made. And yet, it was the Thomas Dam company who sold them the rights. Even stranger are the kind of trolls used here, whoring for M. A. C. cosmetics against their will. These are called Dark Horse trolls, and they were made under license from Thomas Dam  for only a few years. They were sold mainly at Comicon-type conventions and at comic book stores. They look like no trolls ever seen, with bizarre flourescent colors, sparkles embedded in the vinyl, fur-covered skin like velvet, metallics, and other odd un-troll-like effects. 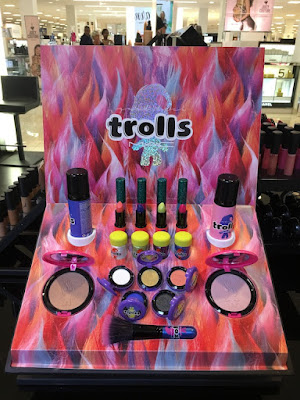 I thought, naturally, with all this troll hoop-la, if you actually bought some of these cosmetics, you'd either get a free troll (free troll. . . mmmmmm) or at least have the opportunity to buy one. These are, after all, relatively rare specimens, though a few are still floating around eBay. But no. There are pictures of trolls on the labels, but it makes no sense, because what does this have to do with eyeliner and lipstick and 47 shades of nail polish? Why even buy that junk at premium prices, unless it comes with a troll?

There is a good side to this, as there is to some things. The M. A. C. video had some troll makeover/trolls a-go-go snippets in it which made a VERY groovy gif. I used just the best parts.

Posted by Margaret Gunning at 1:14 AM No comments: